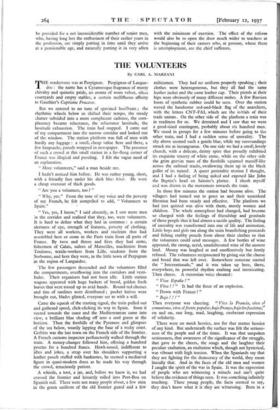 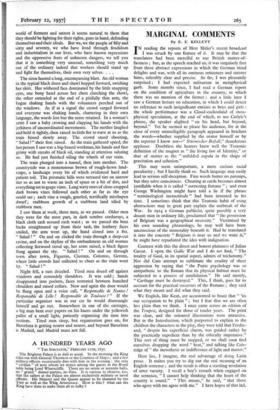 THE rendezvous was at Perpignan. Perpignan of Langue- doc : the name has a Cyranoesque fragrance of musty chivalry and quixotic pride, an aroma of worn velvet, silent courtyards and empty stables, a certain mellifluous affinity to Gauthier's Capitaine Fracasse.

But we entered to no tune of spavined hoofbeats ; the rhythmic wheels below us shifted their tempo, the steady chatter subsided into a more complacent cadence, the com- placency became reluctance, the reluctance lassitude, the lassitude exhaustion. The train had stopped. I came out of my compartment into the narrow corridor and looked out of the window. The station platform was full of men with hardly any luggage : a small, cheap valise here and there, a few knapsacks, parcels wrapped in newspaper. The presence of such a crowd at this small station in a far-flung corner of France was illogical and puzzling. I felt the vague need of an explanation.

" More volunteers," said a man beside me.

I hadn't noticed him before. He was rather young, short, with a friendly face under his dark blue beret. He wore a cheap overcoat of thick goods.

" Why, yes." From the tone of my voice and the poverty of my French, he felt compelled to add, " Volunteers to Spain."

" Yes, yes, I know," I said absently, as I saw more men in the corridor and realised that they, too, were volunteers. It is hard to define what they had in common : a certain alertness of eye, strength of features, poverty of clothing. They were all workers, workers and students that had assembled here or come in the Paris train from all parts of France. By twos and threes and fives they had come, fishermen of ('dais, sailors of Marseilles, machinists from Toulouse, textile-workers from Lille, students from the Sorbonne, and here they were, in the little town of Perpignan in the region of Languedoc.

The few passengers descended and the volunteers filled the compartments, overflowing into the corridors and vesti- bules. Their organisers had not been idle. Little station wagons appeared with huge baskets of bread, golden fresh loaves that were tossed up to avid hands. Round red cheeses and tins of sardines were distributed ; pocket knives were brought out, blades glinted, everyone set to with a will.

Came the squeak of the starting signal, the train pulled out and gathered speed, click-clicking its way to Spain. Soon it veered towards the coast and the Mediterranean came into view, a brilliant blue shading off into a cool green at the horizon. Then the foothills of the Pyrenees and glimpses of the sea below, wearily lapping the base of a rocky coast. Cerbere was the last town on the French side of the frontier. A French customs inspector perfunctorily walked through the train. A money-changer followed him, offering a hundred pesetas for a hundred francs. Hawk-nosed, indifferent to jibes and jokes, a strap over his shoulders supporting a leather pouch stuffed with banknotes, he seemed a mediaeval figure in quasi-modern dress as he made his way through the crowd, tenaciously patient.

A whistle, a toot, a jar, and, before we knew it, we had crossed the frontier and leisurely rolled into Port-Bou on Spanish soil. There were not many people about, a few min in the green uniform of the old frontier guard and a feii militiamen. They had no uniform properly speaking ; their clothes were heterogeneous, but they all had the same leather jacket and the same leather cap. Their pistols at their hips were obviously of many different makes. A few Russian boots of synthetic rubber could be seen. Over the station waved the handsome red-and-black flag of the anarchists, with the letters CNT-FAI, which are the initials of their trade unions. On the other side of the platform a train was in readiness for us. We detrained and I saw that we were a good-sized contingent, probably about six hundred men. We stood in groups for a few minutes before going to the other train, and I had a sudden sense of unreality. The sky above seemed such a gentle blue, while my surroundings struck me as incongruous. On one side we had a small, lovely church, with a delicate, dainty spire that proudly exhibited its exquisite tracery_ of white stone, while on the other side the grim granite mass of the foothills squatted mastiff-like across the railroad tracks, swallowing them up in the black gullet of its tunnel. A queer peristaltic motion I thought, and I had a feeling of being naked and exposed like John the Baptist's head on Salome's platter. I shook myself and was drawn in the movement towards the train.

In those few minutes the station had become alive. The villagers had turned out to greet us and their unnoticed filtration had been steady and effective. The platform we had just quitted was alive with them, mostly women and children. The whole atmosphere had changed, had become so charged with the feelings of friendship and gratitude of those people that it had almost a tactile quality. The feeling of unreality was transformed into one of life and animation. Little boys and girls ran along the train brandishing postcards and fishing stubby pencils from about their clothes so that the volunteers could send messages. A few bottles of wine appeared, the strong, acrid, unadulterated wine of the austere land. Money was laughed at and unoffensively but firmly refused. The volunteers reciprocated by giving out the cheese and bread that was left over. Somewhere someone started the " Internationale," and it was taken up here, there, everywhere, its powerful rhythm exalting and intoxicating. Then cheers. A stentorian voice shouted : " Viva Espaiia ! "

There were no mock heroics, nor for that matter heroics of any kind. But underneath the surface was felt the serious- ness of the people and of the times. It was that unspoken seriousness, that awareness of the significance of the struggle, that gave to the cheers, the songs and the laughter their peculiar exaltation, an exaltation which, though not hysterical, was vibrant with high tension. When the Spaniards say that they are fighting for the democracy of the world, they mean literally that. And in the faces of the old men and women I caught the spirit of the war in Spain. It •was the expression of people who are witnessing a miracle and can't quite believe the evidence of things seen. It was something infinitely touching. These young people, the faces seemed to say, they don't know what it is they are witnessing. Born in a world of ferment and unrest it seems natural to them that they should be fighting for their rights, guns in hand, defending themselves and their ideals. But we, we the people of fifty and sixty and seventy, we who have lived through feudalism and industrialism in our lives, who have known repressions and the oppressive fears of unknown dangers, we tell you that it is something very unusual, something very much out of the ordinary indeed that workers should stand up and fight for themselves, their own very selves. . . .

The siren hooted a long, encompassing blast. An old woman in the typical black dress and shawl hopped forward, swishing her skirt. Her withered face dominated by the little snapping eyes, one bony hand across her chest clutching the shawl, the other extended at the end of a pitifully thin arm, she began shaking hands with the volunteers perched out of the windows. As if at a signal the crowd surged forward and everyone was shaking hands, chattering in their own language, the words lost but the sense retained. In a woman's arms I saw a baby crowing and clapping his hands with the jerkiness of uncoordinated movements. The mother laughed and held it tightly, then raised its little fist to wave at us as the train hissed slowly away. The crowd stood shouting, " Salud !" their fists raised. As the train gathered speed, the last person I saw was a big-boned workman, his hands and face grimy with streaks of black oil, standing at attention saluting us. He had just finished oiling the wheels of our train.

The train plunged into a tunnel, then into another. The countryside was a monotonous brown of rough-hewn land- scape, a landscape every bit of which evidenced hard and patient toil. The prismatic hills were terraced tier on narrow tier so as not to waste an inch of space or a bit of dirt, and everything set to grape vines. Long wavy rows of dose-cropped dark brown vines followed each other as far as the eye could see ; each vine a rough, gnarled, terrifically misshapen dwarf ; stubborn growth of a stubborn land tilled by stubborn men.

I saw them at work, those men, as we passed. Older men they were for the most part, in dark sombre corduroys, a black cloth sash around each waist ; as we passed the bent backs straightened up from their task, the leathery faces smiled, the arm went up, the hand closed into a fist. " Salud ! " On and on clicked the train through a deep-cut ravine, and on the skyline of the embankment an old woman collecting firewood stood up, her arms raised, a black figure flung against the sky. " Salud ! " On and on through town after town, Figueras, Ciurona, Colomas, Gerona, where little crowds had collected to cheer as the train went by. " Salud ! "

Night fell, a rain drizzled. Tired men dozed off against windows and comradely shoulders. It was cold ; hands disappeared into pockets, faces retreated between hunched shoulders and raised collars. Now and again the door would be flung open and a voice call, " Responsable de Nantes ! Responsable de Lille ! Responsable de Toulouse ! " If the particular organiser was in our car he would disentangle himself and go out. Somewhere in one of the carriages, a big man bent over papers on his knees under the yellowish pallor of a small light, patiently organising the men into sections. Tired men sleep, but organisation goes on, for Barcelona is getting nearer and nearer, and beyond Barcelona is Madrid, and Madrid must not fall.