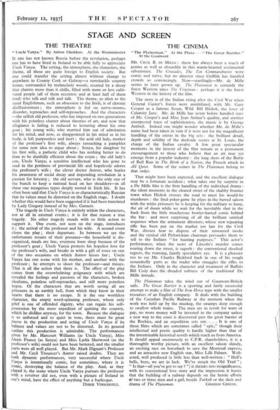 " Uncle Vanya." By Anton Chekhov. At the Westminster

IF one has not known Russia before the revolution, perhaps one has to have lived in Ireland to be able fully to appreciate Uncle Vanya. The setting, the atmosphere, the characters, the theme, all these are quite foreign to English society. But one could transfer the setting almost without change to anywhere in County Cork or GalwayŌĆöa ramshackle country house, surrounded by melancholy woods, scented by a decay that charms more than it chills, filled with more or less culti- vated people (all of them eccentric and at least half of them mad) who talk and talk and talk. The theme, so alien to the saner Englishman, such an obsession to the Irish, is of chronic disillusionment ; the atmosphere is fed on nerve-storms, disorder, reproaches and self-reproaches. And the characters ŌĆöthe selfish old professor, who has imposed on two generations with his pointless chatter about theories of art, and now that allegiance is failing is reduced to lecturing about his own gout ; his young wife, who married him out of admiration for his mind, and now, as disappointed in his mind as in his body, is left purposeless and inert ; the acid old lady, mother of the professor's first wife, always ransacking a pamphlet for some new idea to argue about ; Sonya, his daughter by his first wife, a pathetic child who has nothing better to do than to be dutifully efficient about the estate ; the old lady's son, Uncle Vanya, a sensitive intellectual who has gone to seed in the pettiness of provincial life and hopelessly adores the professor's wife ; the clever doctor Astrov, who buries his awareness of social decay and impending revolution in a passion for forestry ; the old servant, who is the only one of the bunch to keep a rational head on her shouldersŌĆöin all these one recognises types deeply rooted in Irish life. It has often been said that Uncle Vanya is so characteristically Russian that its values must be distorted on the English stage. I doubt whether this would have been suggested if it had been translated by Lady Gregory instead of by Mrs. Garnett.

The tragedy in Uncle Vanya is entirely within the characters, not at all in external events ; it is for that reason a true tragedy. No other tragedy stands with so little action to support it. One event, not seen on the stage, introduces it ; the arrival of the professor and his wife. A second event closes the play ; their departure. In between we see the unfortunate results of their presenceŌĆöthe household is dis- organised, meals are late, everyone loses sleep because of the professor's gout ; Uncle Vanya protests his hopeless love for the professor's wife, and breaks in with a gift of roses on one, of the two occasions on which Astrov kisses her ; Uncle Vanya has one scene with his mother, and another with the professor ; he attempts to shoot the professorŌĆöand misses. That is all the action that there is. The effect of the play comes from the overwhelming poignancy with which are revealed the feelings and passions of the characters, broken idealisms, pointless self-reproaches, and still more pointless hopes. Of the characters that are worth saving all are prisoners in an earthly hell, from which they know in their hearts that there is no escape. It is the one worthless character, the empty word-spinning professor, whose only grief is one of offended dignity, who can regain his self- possession by the mere expedient of quitting the country, which he dislikes anyway, for the town. Because the dialogue is so unforced and to quiet- in tone, there must be great finesse in the production and acting of Uncle Vanya if its balance and values are not to be distorted. In its general outline this production is admirable. The performances given by Mr. Harcourt Williams (as Uncle Vahya), Miss Alexis France (as Sonya) and Miss Lydia Sherwood (as the professor's wife) could not have been bettered, and the smaller parts were all well played. But Mr. Mark Dignam's Professor and Mr. Cecil Trouncer's Astrov raised doubts. They are both dynamic performances, very successful where Uncle Vanya is intentionally comic, but sometimes, where it is ironic, destroying the balance of the play. And, as they played it, the scene where Uncle Vanya pursues the professor with a revolver did not, even with a picture of Ireland in one's mind, have the effect of anything but a burlesque.