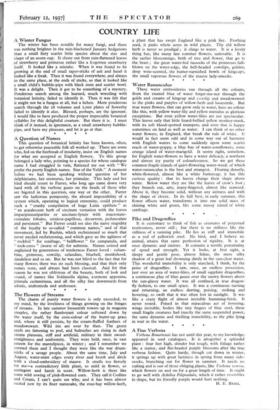 The winter has been notable for many fungi, and there was nothing brighter in the rain-blackened January hedgerows than a small fiery scarlet little species about the size and shape of an acorn cup. It shone out from rain-flattened leaves of strawberry and primrose rather like a forgotten strawberry itself. It looked like a mistake. When it was found to be growing at the end of small taper-sticks of ash and hazel it looked like a freak. Then it was found everywhere, and always in the same place, at the ends of sticks, so that it looked like a small child's bubble-pipe with black stem and scarlet bowl. It was a delight. Then it got to be something of a mystery. Ponderous search among the learned, much wrestling with botanical latinity, failed to identify it. Then it was felt that it might not be a fungus at all, but a lichen. More ponderous search through the 28 volumes and 2,000 plates of Sowerby failed to identify it also. Blessed, perhaps, are the ignorant. I would like to have produced the proper impeccable botanical syllables for this delightful creature. But there it is. I must think of it instead, in ignorance, as a small strawberry bubble- pipe, and have my pleasure, and let it go at that. * * * *

A Question of Names

This question of botanical latinity has been known, often, to get otherwise peaceable folk all worked up. There are some who, fed on the beefsteak of insularity, insist on English names for what are accepted as English flowers. To this group belonged a lady who, pointing to a species for whose catalogue name I had struggled in vain, flattened me out with " We prefer the pretty English names. Star of the Veldt." A moment before we had been speaking without question of her delphiniums, her eremurus, her primulae. This lady and her kind should resort to Farrer, who long ago came down very hard with all his verbose gusto on the heads of those who are bigoted in this question, one way or the other. Farrer saw the ludicrous pomposity, the absurd impossibility of a system which, operating to logical extremity, could produce such a " cranky compilation of huge Latin epithets " as " an acaulescent herb of circinate vernation with the leaves imparipinnatipartite or uncinate-lyrate with mucronate- crenulate lobules, setulose-papillose, decurrent, pedunculate and persistent." But Farrer could see also the naive stupidity of the loyalty to so-called " common names," and of ,that movement, led by Ruskin, which rechristened so much that never needed rechristening, and which gave us the ugliness of " rockfoil " for saxifrage, " bellflower " for campanula, and " rock-cress " (worst of all) for aubretia. Names coined and anglicised by generations of tenderness Farrer loved : colum- bine, primrose, cowslip, celandine, bluebell, monkshood, dandelion and so on. But he was not blind to the fact that for many flowers there was no such blessing, and that their only names were, and always had been classical. And for that reason he was not oblivious of the beauty, both of look and sound, of names like Soldanella alpina, anemone appenina, primula cashmiriana, and all the silky line downwards from adonis, andromecla and androsace.

The Flowers of Streams

The charm of purely water flowers is only exceeded, to my mind, by the loveliness of things growing on the fringes of streams. In late summer loosestrife towers up in magenta steeples, the rather flamboyant colour softened down by the water itself, by the corn-colour of the burnt-up grass and, where it still persists, by the cream-fluffed feathers of meadowsweet. Wild iris are over by then. The green seeds are fattening to pod, and bulrushes are rising in dark sienna platoons, stiff and artificial, military in their sword- straightness and uniformity. They were held, once, in vast esteem for the mantelpiece, in winter ; and I remember we coveted them and I thought they were like the war drum- sticks of a savage people. About the same time, July and August, water-mint edges every river and brook and ditch with a cloud-embroidery of mauve. It smells too fiercely for me—a contradictory little plant, so mild in flower, so astringent and harsh in scent. Willow-herb is there like some wild sowing of pink-flowered corn. They call it Codling and Cream, I can't quite see why, and it has been almost ousted now by its finer namesake, the rose-bay willow-herb,

a plant that has swept England like a pink fire. Frothing seed, it pinks whole acres in wild places. The old willow herb is never so prodigal ; it clings to water. It is a lovely thing but, like many late summer flowers, unlovable. It is the earlier blossomings, both of tree and flower, that go to the heart ; the great water-fed tussocks of the primroses full- blown on the water-edge, the bell-headed cowslips, golden, deep wine-scented, the butter-varnished bowls of kingcups, the small vaporous flowers of the mauve lady-smocks.

These water embroideries run through all the colours, from the enamel blue of water forget-me-not through the golds and creams of kingcup and c:•.vslip and meadowsweet to the pinks and purples of willow-herb and loosestrife. But true water flowers, that can grow only in water, have no colour like this, with yellow water-lily and yellow mimulus as glorious exceptions. But even yellow water-lilies are not spectacular. This leaves only that little lizard-bellied yellow monkey-musk, with its soft blood-spotted trumpets, and even that is happy sometimes on land as well as water. I can think of no other water flowers, in England, that break the rule of white. It would in fact seem odd and in some way out of harmony with English waters to come suddenly upon some scarlet reach of water-poppy, a blue bay of water-cornflowers, some orange island of water-marigold. It seems right, somehow, for English water-flowers to have a water delicacy, a northern and almost icy purity of colourlessness. So we get those common fragile islands of quiet-flowering water-weed, of which water-ranunculus is the best and strangest. Floating densely, white-flowered, almost like a white buttercup, it has this curious quality : that its leaves change their shape above water. Below water they are like the leaves of crow's foot ; they branch out, airy, many-fingered, almost like seaweed. Above it, they become solid, without any airiness and with the shape of clover. In its full best, in early summer, this flower effaces water, transforms it into one solid mass of shining white and green, like some mossy island of white saxifrage.

It is customary to think of fish as creatures of perpetual restlessness, never still ; but there is no stillness like the stillness of a sunning pike. He lies as stiff and immobile as a rod of yellowish steel. No bird, and I believe no animal, attains that same perfection of rigidity. It is at once dynamic and sinister. It contains a terrific potentiality of speed and strength. Yet it looks, at first sight, a sleepy and gentle pose, almost feline, the mere silky shadow of a great leaf drowning dimly in the sun-clear water. This wonderful immobility is only matched, I think, by the poise of dragonflies. I saw, once, an endless procession, just over an area of water-lilies, of small sapphire dragonflies, a continuous play of blue gauze over the snowy flowers above the sun-glassy water. It was all confined, in true dragon- fly fashion, to one small space. It was a continuous turning and returning, an endless darting, poising, striking and hovering, so swift that it was often lost in sunlight. It was like a crazy flight of almost invisible humming-birds. It never rested. Poised in that miraculous act of hovering, wings invisible, bodies like tiny fingers of blue steel, these small fragile creatures had exactly the same suspended power, the same dynamic and thrilling immobility, as the pike lying in wait in the water.

Verbena Bonariensis has not until this year, to my knowledge, appeared in seed catalogues. It is altogether a splendid plant : four feet high, slender but tough, with foliage rather like a statice, and flat-headed purple blossoms after the true verbena fashion. Quite hardy, though cut down in winter, it springs up with great lustiness in spring from many side- stocks, branching out for flower in summer. It needs no staking and is one of those obliging plants, like Verbena venosa, which flowers on and on for a great length of time. It ought to go well with Achillea Filipendula, which it rather resembles in shape, but its friendly purple would hurt nothing.