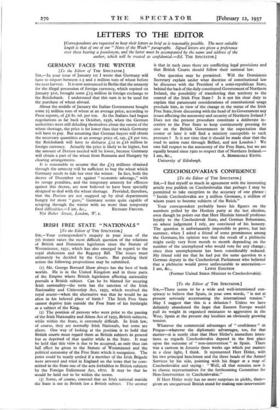 [Correspondents are requested to keep their letters as brief as is reasonably possible. The most suitable length is that of one of our " News of the Week" paragraphs. Signed letters are given a preference over those bearing a pseudonym, and the latter must be accompanied by the name and address of the author, which will be treated as confidential.—Ed. THE SPECTATOR.] [To the Editor of THE SPECTATOR.]

Sia,—In your issue of January 1st I wrote that Germany will have to import between 1.5 and 2 million tons of wheat before the next harvest. It is now announced in Berlin that the amnesty for the illegal possession of foreign currency, which expired on January 31St, brought some £13 million in foreign exchange to the Reichsbank. I understand that this sum is to be used for the purchase of wheat abroad.

About the middle of January the Italian Government bought some 21 million tons of wheat at an average price, according to Press reports, of £6 8s. od. per ton. As the Italians had begun negotiations as far back as October, 1936, when the German authorities were still deluding themselves about the extent of the wheat shortage, the price is far lower than that which Germany will have to pay. But assuming that German buyers will obtain the necessary quantities at an average price of, say, £8 per ton, the Reichsbank will have to disburse £12 to £16 million in foreign currency. Actually the price is likely to be higher, but the amount of Devisen needed will be lower, because Germany will obtain a part of the wheat from Rumania and Hungary by clearing arrangements.

It is reasonable to assume that the £13 millions obtained through the amnesty will be sufficient to buy the wheat which Germany needs to tide her over the winter. In fact, both the decree of December 1st against " economic sabotage," with its savage penalties, and the temporary amnesty for offences against this decree, are now believed to have been specially designed to deal with the wheat shortage. Provided, therefore, that the Devisen are not snapped up by rival departments hungry for more " guns," Germany seems quite capable of scraping through the winter with no more than temporary