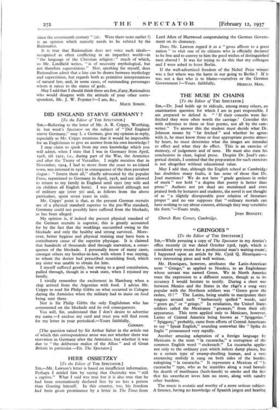 [To the Editor of THE SPECTATOR.] Sta,—Referring to the letter of Mr. A. R. Cripps, Worthing, in last week's Spectator on the subject of " Did England starve Germany," may I, a German, give my opinion in reply, especially as Mr. Cripps mentions that it would be impossible for an Englishman to give an answer from his own knowledge?

I may claim to speak from my own knowledge which you will admit, when I state that I was in Germany from April, 1918, till 1921, i.e., during part of the War, the Armistice and after the Treaty of Versailles. I might mention that in November, 1914, I had to move from the coast to an inland town, was interned in 1915 in consequence of the then prevalent slogan : " Intern them all," chiefly advocated by the popular Fress, repatriated to Germany in April, 1918, and not allowed to return to - my family in England until 1921 (my wife and six children all English born). I was interned although not of military age (over so) and, as follows from the above particulars, spent seven years in exile.

Mr. Cripps' point is that, as the present German recruits are of a physical standard superior to the pre-War standard, Germany could not possibly have suffered from the blockade, as has been alleged.

My opinion is, if indeed the present physical standard of the German recruits is superior, this is greatly accounted for by the fact that the weaklings succumbed owing to the blockade and only the healthy and strong survived. More- over, better hygiene and physical training may have been a contributory cause of the superior physique. It is claimed that hundreds of thousands died through starvation, a conse- quence of the blockade. I personally know of many cases, amongst others my brother-in-law, with whom I was staying, to whom the doctor had prescribed nourishing food, which my sister was unable to obtain for him.

I myself suffered greatly, but owing to a good constitution, pulled through, though in a weak state, when I rejoined my family.

I vividly remember the excitement in Hamburg when a ship arrived from the Argentine with food. I advise Mr. Cripps to read Sir Philip Gibbs on what occurred in Cologne during the Armistice when the military had to insist on food being sent there.

Nor is Sir Philip Gibbs the only Englishman who has commented on the blockade and its evil consequences.

You will, Sir, understand that I don't desire to advertise my name.—I enclose my card and trust you will find room for my letter in your periodical.—Yours faithfully,

[The question raised by Sir Arthur Salter in the article out of which this correspondence arose was not whether there was starvation in Germany after the Armistice, but whether it was due to " the deliberate malice of the Allies " and of Great Britain in particular.—ED. The Spectator.]