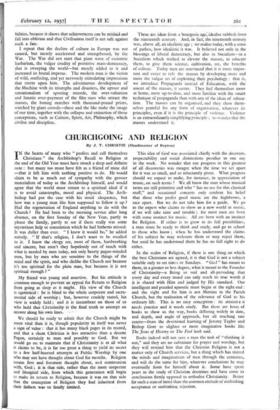 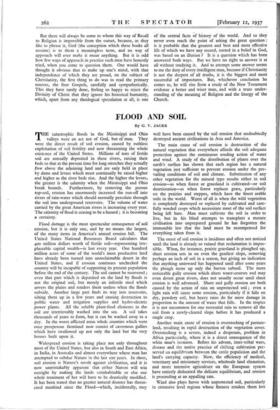 IN the hearts of many who " profess and call themselves I Christians " the Archbishop's Recall to Religion at the end of the Old Year must have struck a deep and definite note : but many too must have felt as a friend of mine did —that it left him with nothing positive to do. He would claim to be as much out of sympathy with the grosser materialism of today as the Archbishop himself, and would agree that the world must return to a spiritual ideal if it is to avoid catastrophe, moral and physical. The Arch- bishop had put the case with his usual eloquence, but how was a young man like him supposed to follow it up ? Had the regeneration of England anything to do with the Church ? He had been to the morning service after long absence, on the first Sunday of the New Year, partly to please the family, partly to see if there really was some mysterious help or consolation which he had hitherto missed. It was duller than ever. " I knew it would be," he added naively, " If that's religion, I don't want to be recalled to it, I know the clergy are, most of them, hardworking and sincere, but aren't they hopelessly out of touch with what is needed by men today, not only hearty pagan-minded men, but by men who are sensitive to the things of the mind and the spirit, and who dislike the Church not because it's too spiritual for the plain man, but because it is not spiritual enough ? "

My friend was young and assertive. But his attitude is common enough to prevent an appeal for Return to Religion from going as deep as it might. His view of the Church is egotistical : he is blind to the whole corporate and sacra- mental side of worship ; but, however crudely stated, his view is widely held ; and it is incumbent on those of us who hold that Christianity is • the final truth to attempt an answer along his own lines. , - We should be ready to admit that the Church might be more vital than it is, though popularity in itself was never a sign of value : that it has many black pages in its record, and that a sham Christian is less attractive than a decent Pagan, certainly to man and possibly to God. But we would go on to maintain that if Christianity is at all what it claims to be, it is fitr too great a thing to yield its secret to a few half-hearted attempts at Public Worship by one who may not haVe thought about God for months. Religion means first and foremost thought about, and communion with, God ; it is that side, rather than the more corporate and liturgical side, from which this generation will begin to make its return to Religion; because it was on that side that the conception of Religion they had inherited from their fathers was- so fatally limited. This idea of God was associated chiefly with the decorum, respectability and social distinctions peculiar to one uay in the week. No wonder that our progress in this greatest of all discoveries was meagre when the time we set apart for it was so small, and so reluctantly given. What progress should we expect to make, for instance, in appreciation of musk, on such terms ? We all know the man whose musical tastes are still primitive and who " has no use for this classical stuff," and occasional concerts only confirm his belief that those who prefer good music are the highbrows, a race apart. But we do not take him for a guide. We go to the expert who claims to show us a new world in music, if we will take time and trouble ; for most men are born with some instinct for music. All are born with an instinct for Religion. If either is to grow to its full possibilities, a man must be ready to think and study, and go to school to those who know ; when he has understood the claims of his subject he may welcome them or may reject them, but until he has understood them he has no full right to do either.

In the realm of Religion, if there is one thing on which the best Christians are agreed, it is that God is not a subject suitable only to set times or Sundays. " God " has meant to them, in a greater or less degree, what it meant to the Founder of Christianity—a Being so real and all-pervading that every day and every mood can only reach its true worth if it is shared with Him and judged by His standard. Our intelligent and puzzled agnostic must begin at the right end : and the right end for him is not Martins in the Parish Church, but the realisation of the relevance of God to his ordinary life. This is no easy conception : its attainrr e it needs practice and it needs study. But there are hosts of books to show us the way, books differing widely in date, and depth, and angle of approach, but all reaching one centre—from the devotional learning of Jeremy Taylor and Bishop Gore to slighter or more imaginative books like The Jesus of History or The Fool bath said.

Books indeed will not save a man the task of "thinking it out," and they are no substitute for prayer and worship, but they will remind him that the Christian Religion is not a matter only of Church services, but a thing which has stirred the minds and imaginations of men through the centuries, and will -do the same for him, whatever conclusions he may eventually form for himself about it. Some have spent years in the study of Christian doctrines and have come to conclusions firmly opposed to orthodox Christianity. Better far such a state of mind than the common attitude of unthinking acceptance or unthinking rejection. But there will always be some to whom this way of Recall to Religion is impossible from the outset, because, as they like to phrase it, God (the conception which these books all assume) is to them a meaningless term, and no way of approach will ever make it mean anything. But it is odd how few ways of approach in practice such men have honestly tried, when you come to question them. One would have thought it obvious that to make up one's mind, with that independence of which they are proud, on the subject of Christianity, the first thing to do was to read the primary sources, the four Gospels, carefully and sympathetically. This they have rarely done, feeling so happy to reject the Divinity of Christ that they ignore his historical humanity, which, apart from any theological speculation at all, is one of the central facts of history of the world. And so they never even reach the point of asking the great question : is it probable that the greatest and best and most effective life of which we have any record, rooted in a belief in God, was based on an illusion ? It is a question which has been answered both ways. But we have no right to answer it at all without studying it. And to attempt some answer seems to me the duty of every intelligent man, because if Christianity is not the deepest of all truths, it is the biggest and most successful of impostures. But, whichever conclusion he comes to, he will rise from a study of the New Testament evidence a better and wiser man, and with a truer under- standing of the meaning of Religion and the liturgy of the Church.