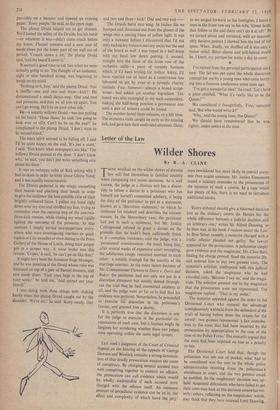 By R. A. CLINE THOSE wreaked on the wilder shores of divorce law will find themselves in familiar country when comparing two recent decisions. As is well known, the judge in a divorce suit has a discre- tion to refuse a decree to a petitioner who has himself (or herself) committed adultery, it being the duty of the petitioner to put in a statement, known as a 'discretion statement,' in which he confesses his misdeed and describes the circum- stances. In the Shrewsbury case, the petitioner had put in such a statement, but Mr. Justice Collingwood refused to grant a decree on the grounds that he hadn't been sufficiently frank in it—complete frankness, said the judge, was a 'paramount' consideration—the result being that, after several weeks of expensive court wrangling, the adulterous couple remained married .to each other : a notable triumph for the sanctity of the marriage contract. In the more recent decision of Mr. Commissioner Flowers in Davis v. Davis and Baker, the petitioner had not only not put in a discretion statement but stoutly denied through- out the trial that he had committed adultery at all, and the judge went so far as to find that his evidence was perjured. Nevertheless, he proceeded to exercise his discretion in the petitioner's favour, and granted him a decree.

It is perfectly true that the discretion is one for the judge to exercise in the particular cir- cumstances of each case, but a layman might be forgiven for wondering whether these two judges were operating within the same legal system.

Last week's judgment of the Court of Criminal Appeal on the hearing of the appeals of George Dawson and Wenlock contains a strong denuncia- tion of that deadly prosecution weapon the count of conspiracy. By charging several accused men with conspiring together to commit an offence, the prosecution can call evidence which would be wholly inadmissible if each accused were charged with the offence itself. An immense amount of prejudicial evidence can be let in, the effect and complexity of which leave the jury- man bewildered but more likely to convict every- one than acquit someone. Mr. Justice Finnemore issued a salutary reminder to the prosecution of the injustice of such a course. In a case which has plenty of fire, there is no need to introduce additional smoke.

'Every tribunal should give a reasoned decision just as the ordinary courts do. Herein lies the whole difference between a judicial decision and an arbitrary one,' writes Sir Alfred Denning, as he then was, in his book Freedom under the Law. In Bow Street recently a motorist charged with a traffic offence pleaded not guilty. No lawyer appeared for the prosecution. A policeman simply gave evidence and the magistrate, Mr. Clive Burt, finding the charge proved, fined the motorist 20s. and ordered him to pay two guineas costs. The motorist's solicitor, confronted with this judicial decision, asked the magistrate . why he had awarded costs. 'Because I say so,' said the magis- trate. The .solicitor pointed out to the magistrate that the prosecution were not represented. The magistrate replied : 'That is my order.'

The motorist appealed against the order to the Divisional Court who enjoyed the advantage (conspicuously withheld from the defendant at the trial) of having before them the reason for the award : two guineas represented 'a fair contribu- tion to the costs that had been incurred by the prosecution by appropriation to the case of the time of the Police Force.' The motorist argued that the costs had_been imposed on him as a penalty or fine.

The Divisional Court held that, though the policeman was not out of pocket, what had to be considered was the cost to the whole police administration resulting from the policeman's attendance in court, and the two guineas could be justified. So the magistrates' decision was up- held. Acquitted defendants who have failed to get their costs may look at this decision somewhat bit- terly; others, reflecting on the magistrates' words, may think that they have misread Lord Denning.