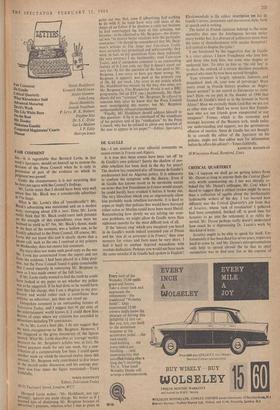 DE GAULLE SIR,—I am amazed at your editorial comments on

recent events in France and Algiers.

Is it true that these events have been 'set off' by de Gaulle's own policies? Surely the shadow of pos- sible rebellion has been dark in the sky for years? The shadow has remained afar off because de Gaulle's predecessors had no Algerian policy. It is unhistoric to confuse the symptom with the disease. Even if de Gaulle has known revolt to be inevitable except on terms that few Frenchmen in France would accept, he could hardly have crushed it before it broke out. The very liberalism which you so ungraciously allow him probably made rebellion inevitable. It is hard to argue or imply that policies that would have betrayed either colon or Muslim could have been more liberal. Remembering how slowly we are solving our over- seas problems, we might allow de Gaulle more than eighteeen months for the most difficult task of all.

and his 'don de sa personne a la France,' then your memory for voices and facts must be very short. I find it hard to confuse dejected masochism with resolute dedication. Perhaps you would not have made the same mistake if de Gaulle had spoken in English?

Rhodomontade is the oddest description yet for de Gaulle's severe, passionate and marmoreal style, both in speech and in writing.

The belief in French cynicism belongs to the same mentality that sees the Intelligence Service under every bowler hat. Is a distrust of politicians more than the voice of disenchantment with secular deception? Is it cynical to despise the cynic?

am fascinated by the suggestion that de Gaulle is a vieux gateux. I know Frenchmen who love him and those who hate him, but none who despise or underrate him. To refer to him as 'the old boy' is to share the outlook of a certain dissident parachute general who must by now have second thoughts.

Your comment is largely splenetic, fantastic and prejudiced. And, oh, your tone of patronage! Must every event in French history produce an Anglo- Saxon sermon? Is our record as Europeans so stain- less? Have we no part in the disaster of 1940 that formed de Gaulle's mind or in the ferment in North Africa? Must we eternally thank God that we are not as other men are? Shall we never learn that French- men who are our friends grow exasperated at our smugness? France, which is the economic and strategic keystone of the Western arch, needs today our understanding and support, not the spontaneous effusion of unction. Since de Gaulle has not thought fit to consult the editor of the Spectator on his policies, might not that editor wait for information before he offers his advice?—Yours faithfully,