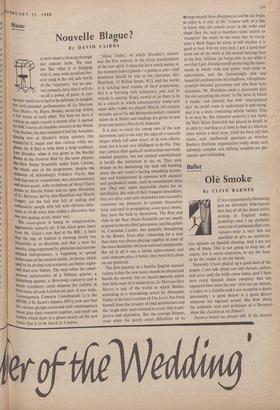 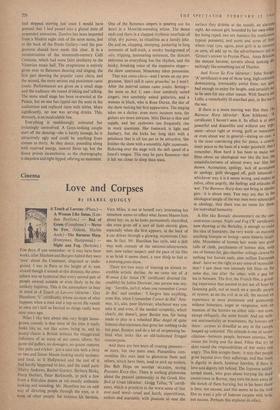 By CLIVE BARNES Naturally I have picked up a good deal of the jargon. I can talk about son and duende, palmas and pitos until the bulls come home, and I have seen every Spanish dance company that has appeared here since the war. Give me an Amaya, a Lopez or a Luisillo and I can recognise a dance personality : a good dancer is a good dancer whatever his regional accent. But how about the authentic style and technique of a flamenco show like Zatnbra at the Palace?

Zanzbra bored me almost stiff. If the dancers had stopped moving just once I would have guessed that I had passed into a glazed state of suspended animation. Zambra has been imported from a Madrid night club of the same name, just at the back of the Prado Gallery—and the pro- gramme should have made this clear. It is a reconstruction of the nineteenth-century Cafe Cantante, which had some faint similarity to the Victorian music hall. The programme is entirely given over to flamenco dancing and singing, the first part showing the popular cante chico, and the second, the more serious and passionate came iondo. Performances are given on a small stage and the audience sits round drinking and talking. The same small stage has been re-erected at the Palace, but no one has ripped out the seats in the auditorium and replaced them with tables. More significantly, no one was serving drinks. This, striously, is an incalculable loss.

Everything is maddeningly animated but irritatingly unresolved. A Goya-looking couple start off the dancing—she is barely teenage, he is attractively ugly and could be anything from sixteen to thirty. As they dance, pounding along with reserved energy, interest flares up, but the dance proves inconclusive, as the choreography is shapeless and tight-lipped, offering no statement. One of the flamenco singers is pouring out his heart in a Moorish-sounding whine. The dance ends and there is a clapped rhythmic interlude of crisp, dry pahnas, as ritualistic as a family joke. On and on, clapping, stamping, posturing in long moments of half-truth, a smoky background of o/es, tripping, insinuating sentences, the dancers oblivious to everything but the rhythm, and the husky, breaking voice of the impassive singer— the show continues. Monotony takes possession.

That was cante-chico—and 1 wrote on my pro- gramme, 'don't call it cante groucho,' so 1 won't. After the interval comes cante londo. Setting— the same as Act 1; cast—four sombrely suited singers, two sombrely suited guitarists, and a woman in black, who is Rosa Duran, the star of the show making her first appearance. The singing takes on a darker, even more insistent note, the guitars are more intricate. Miss Duran is thin and supple, and her eyebrows too frequently rise in stock questions. Her footwork is light and feathery, but she kicks her long skirt with a petulance that is all too pat to be attractive. She finishes the show with a smoothly. light zapateado. flickering over the stage with the deft speed of a lizard's tongue. This may be pure flamenco—but it left me closer to sleep than tears.