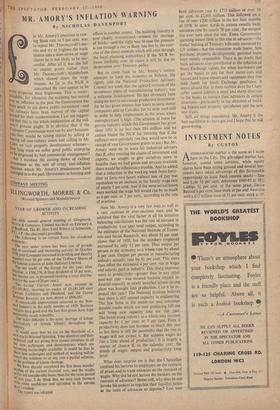 By NICHOLAS DAVENPORT Mr. Amory's intention in rais- ing Bank rate to 5 per cent. was to repeat Mr. Thorneycroft's tac- tics and try to frighten the trade unions into a slow-down of wage claims he is not likely to be suc- cessful. After all it was the fall in import prices rather than Mr. Thorneycroft's blunderbuss which slowed down the wage rounds. As far as the NUR is

concerned the men appear to be nle're desperate than frightened. This is under- standable, for whenever the economy has moved Pin an inflation in the past the Government has the quick to cut down public investment—and trle railways have been starved of the capital needed for their modernisation. I ant not suggest- ing that this is the whole explanation of the rail- ,,way's present plight. It is obvious that if the Transport Commission were run by alert business- ren they would be raising capital by selling or leasing off non-railway assets and calling in Mr. Ls-we on vast property development schemes- ' ,1()%e long must we suffer good public enterprise to be disgraced by bad commercial management? 7-but i mention the cutting down of railway Investment as the sort of crazy anti-inflation rn_ easure which Mr. Amory's predecessors have indulged in in the past. (Investment in housing and offices is another matter. The building industry is now clearly overstrained—witness the shortage of bricks—and the right way to ease the pressure is not through a rise in Bank rate but by the exer- cise of the direct controls which still exist through the local planning authorities.) If the NUR be- haves foolishly over its claim it will be due to desperation over Treasury policy.

But to come back to Mr. Amory's serious attempts to keep the economy in balance. He rightly told the National Production Advisory Council last week that the upward revision of the investment plans of manufacturing industry was a welcome development. He has obviously been doing his best to encourage productive investment, for he has given interest-free loans to some motor companies and to Colvilles for its strip steel mill in order to help employment in the areas where unemployment is high. (The amount of loans for private industry which this Government has given since 1951 is no less than £84 million and we cannot blame the NUR for thinking that if the railways were privately run they would now be in receipt of vast Government grants in aid.) But Mr. Amory went on to warn his industrial advisers that if, after meeting the claims of investment and exports, we sought to give ourselves more in benefits than we had goods and services available there would be inflationary trouble. And he added that a reduction in the working week from forty- four to forty-two hours without loss of pay was equivalent to an increase in the hourly wage rate of nearly 5 per cent. And if the same actual hours were worked the wage bill would rise by as much as 6 per cent. or 7 per cent., according to the rate of overtime.

Now Mr. Amory is a very fair man as well as a very cautious or over-cautious man, and he admitted that the vital factor in all his tentative balancing calculations was the rate of increase in productivity. Last year total output, according to the estimates of the National Institute of Econo- mic and Social Research, was about 54- per cent. above that of 1958, but the numbers employed increased by only 14- per cent. Thus output per person in the economy as a whole rose by about 4 per cent. Output per person in manufacturing industry actually rose by 84 per cent. This more than offset the estimated 4 per cent, rise in wages and salaries paid in industry. This sharp improve- ment in productivity—greater than in any other post-war year—was secured because unused in- dustrial capacity or newly installed labour-saving plant was brought into production. Can it be re- peated this year? The National Institute believes that there is still unused capacity in engineering. The few firms in the motor-car and consumer durable trades which are now producing full out will bring new capacity into use this year. The metal-using industry as a whole may increase capacity by 4 per cent. or 5 per cent. Even if productivity does not increase so much this year as last there is still the possibility that the rise in wages will not exceed it. But suppose wages do rise a little ahead of production? It is largely a matter of chance if, in the calendar year, the trends of wages, output and productivity keep level.

bank advances rose by £715 million or over 30 per cent. to £2,961. million. This followed on a rise of over £200 million in the last four months of 1958. In other words in sixteen months bank advances rose by nearly 50 per cent., the steepest rise ever seen since the war. Extra Government spending meant little in this rise in advances—the banks' holding of Treasury bills only increased by £29 million—but the consumer trade boom, hire purchase, property developments, personal loans were mainly responsible. There is no doubt that bank advances also contributed to the inflation of Stock Exchange values, for when borrowers can get the banks to pay for their motor-cars and houses and house repairs and equipment they free their funds for Stock Exchange purchases. It seems absurd that in these realistic days the Chan- cellor cannot address a short and sharp direction to the banks to restrain their advances in certain directions—particularly in the direction of build- ing finance and property speculation and the new unit trusts.

Still, all things considered, Mr. Amory is the best equilibrist we have got and I hope that he will go on trying.