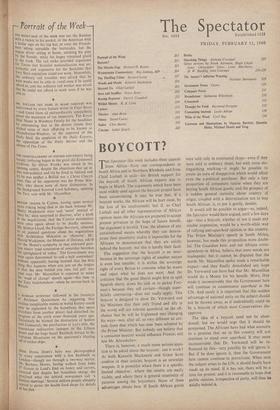 — Portrait of the Week— ME BOGEY-MAN of the week was

not the Russian with a rocket in his pocket, or the American with a dollar sign on his top hat, or even the French- Sitting astraddle the barricades, but the e, ntline driver sitting at home, smoking his pipe °Y the fireside, while his bogey remained glued to the track. The rail strike provided arguments for Tories that Socialist nationalisation was un- Workable and arguments for the Socialists that Tory State capitalism could not work. Meanwhile, the ordinary rail traveller was afraid that he snon won't, not be able to travel even if he could afford to, and the ordinary rail worker was afraid that he could not afford to work even if he was able to

interviewed by every feature writer in Fleet Street —and found them all extraordinarily sympathetic about the meanness of tax inspectors. The Royal (Our Name Is Windsor) Family hit the headlines bY announcing that in the distant future they wished some of their offspring to be known as Mountbatten-Windsor, to the approval of the 1),(61Y Mail, the suspicion of the Daily Express, tne opposition of the Daily Mirror and the Silence of The Times.

THE CHANCELLORSHIP OF OXFORD UNIVERSITY being vacant, lobbying began in the good old Eatanswill tradition. Sir Oliver Franks was ahead in the oPening canter, despite the objections that (a) he was non-political and (b) he lived in Oxford and (0 he was neither a Balliol nor a Christ Church in, an. One of his opponents was the Prime Min- ister, who shares none of these distinctions. In the background hovered Lord Salisbury, splitting the Tory vote with Mr. Macmillan.

(wrist' TROOPS in Cyprus, having spent several Years risking being shot in the back because Mr. ,Henry Hopkinson once said 'never' instead of .inay be,' were surprised to discover, after a hitch in the negotiations, that the Cypriot nationalists were once again about to be deadly enemies. Mr. Selwyn Lloyd, the Foreign Secretary, objected to all pointed questions about his negotiations With Archbishop Makarios as 'offensive.' Mr. Harold Watkinson, the Minister of Defence, asked for the House's sympathy in that awkward posi- tion where 'your concession of yesterday becomes the springboard of today.' The Government was once again determined 'to call a halt somewhere' without apparently having learned that the first thing that happens when you jam on the brakes IS that the man behind you runs full pelt into Your rear. Mr. Macmillan is expected to make his 'wind of change' speech again—this time to the Tory backbenchers—when he arrives, back in Britain.

RUSSIAN SCIENTIST followed in the footsteps of Professor Quatcrmass by ,suggesting that various inexplicable events in world history could Only be explained by the hypothesis that space travellers from another planet had disturbed the Progress of the earth some thousand years ago. Tentatively he blamed the destruction of Sodom and Gomorrah, the petrifaction of Lot's wife, the inYsterious radioactive isotopes in the Libyan desert and the huge basalt Baalbeck terrace in the Lebanon Mountains on the spacemen's blasting off of rocket ships.

,MIRS DIANA DORS'S baby was photographed °Y every cameraman with a live flashbulb in London—though not through a two-way mirror. E. Barbara Moore, having walked from John o' Groats to Land's End on honey and carrots, revealed that despite her boundless energy she Practised what the tabloid newspapers call 'a kissless marriage.' Several million people abruptly ceased to pester the health food shops for details of her diet.