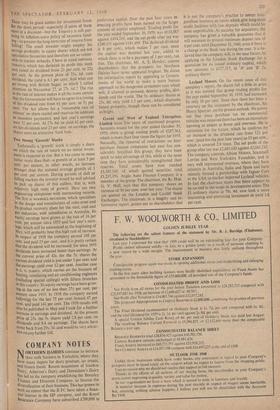 NORTHERN DAIRIES continue_ to increase their milk business in Yorkshire, where they L many depots for dairy produce, ice cream. and frozen foods. Recent acquisition of Ivanhoe 13airy, Atherton's Dairy and Donaldson's Dairy bas led to the company establishing the Beverley F!nance and Discount Company, to finance the diversification of their business. This has grown to anch an extent that the ICFC have taken a finan- cial interest in the HP company, and the Royal Insurance Company have subscribed £200,000 in preference capital. Over the past four years in- creasing profits have been earned on the larger amount of capital employed. Trading profit for the year ended September 30, 1959, was £610,585 against £494,269, and the net profit after tax was £240,151 against £181,499. The declared dividend is 4 per cent., which makes 7 per cent. since the capital was doubled last year, added to which there is to be a payment of 1 per cent., tax free. The chairman, Mr. A. S. Horsley, assures shareholders that the prospects for Northern Dairies have never appeared brighter. He closes his informative report by appealing to Govern- ments of the world to make a more human approach to the dangerous armament race which will, if allowed to proceed, destroy profits, divi- dends and the world. The 5s. ordinary shares at 23s. 8d. only yield 1.5 per cent., which discounts future prospects, though these can be considered as bright.

Gwent and West of England Enterprises Limited have live years of continued progress. Accounts issued for the year ended October 31, 1959, show a group trading profit of £287,363, which is more than four times the figure for 1955. Naturally, the removal of restrictions on hire- purchase finance companies last year has con- siderably benefited this group; they have been quick to take advantage of this, while at the same time they have considerably strengthened their reserves. Total assets have now reached £3,185,549, of which quoted securities total £1,237,356. Anglo Auto Finance Company is a member of the group. The chairman, the Rt. Hon. G. V. Hall, says that this company shows an increase of 50 per cent, over last year. The shares are quoted on the London and Cardiff Stock Exchanges. The chairman, in a lengthy and in- formative report, points out to shareholders that it is not the company's practice to accept hire. ' purchase business on terms which give long-term credit facilities with low deposits which could be most unprofitable. As security for depositors, the company has given a valuable guarantee that it will maintain its present minimum deposit rate of 6 per cent. until December 31, 1960, even if there is a change in the Bank rate during the year. It is be- lieved that the company will, in the near future, be applying to the London Stock Exchange for a quotation for its issued ordinary capital, which now amounts to £127,317, in 'A' and 'B' 5s. ordinary shares.

Leyland Motors. On the recent issue of this company's report, the shares fell a little in price as it was noticed that group trading profits for the year ended September 30, 1959, had increased by only 16 per cent. Since then there has been a recovery on the statement by the chairman, Sir Henry Spurrier, on the present outlook. He points out that since purchase tax on commercial vehicles was removed there has been an immediate upswing in orders at home and overseas. He is optimistic for the future, which he confirms by an increase in the dividend rate from 121 per cent. (paid for the past four years) to 15 per cent., which is covered 2.9 times. The net profit of the group after tax was £2,685,630 against £2,045,745. The company controls Albion Motors, Scammell Lorries and West Yorkshire Foundries, and is very well represented overseas, where they have interests in Australia, India and Spain and have recently formed a partnership with Jaguar Cars in the USA to market imported Leyland vehicles. In fact the chairman states that there appears to be no end to the scope in development areas. The £1 ordinary shares at 78s. 6d. now look a more interesting and promising investment to yield 3.8 per cent,