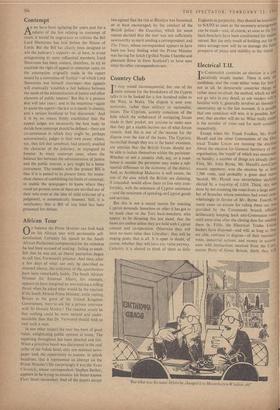 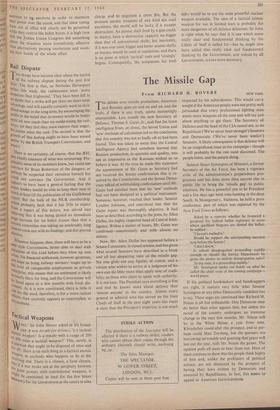 ITN-Communist countries an election is a cool' paratively simple matter. There is only 011 candidate, and the voter either votes for hun not at all. In democratic countries things 3te, rather more involved; the method, which we nee'i not go into in any detail, as our readers will h'1, familiar with it, generally involves an element 01 uncertainty up to the last moment. It is possible that one candidate will win; it is possible. 110' ever, that another will do so. What really counts is the number of votes cast for each candid3te respectively. Except when Mr. Frank Foulkes, Mr. ROI: Haxell and the other Communists of the Elec' trical Trades Union are running the elecil on. About the election for General Secretary of that organisation, the 'result' of which was announcod on Sunday, a number of things are already clear. First, Mr. John Byrne, Mr. Haxell's non-Con1. munist opponent, won the election by at least 1,500 votes, and probably a great deal more. Second, Mr. Haxell was nevertheless •declared elected by a majority of 1,034. Third. this Wag done by not counting the votes from a large nunv ber of branches whose members had voted over' whelmingly in favour.of Mr. Byrne. Fourth. in many cases an excuse for ruling them out provided by the Communist branch 0111C■i■a'31: ' deliberately keeping back anti-Communist wtes until some time after the closing date for sending' them in. Fifth, the Electrical Trades Union leaders have disposed—and will, as long as they' are able, continue to dispose—of their members' votes, industrial actions, and money in accord- ance with instructions received from the Com-„ munist Party of Great Britain. Sixth, they "Ill

'But what was his name bffore he changed it to Mountbatten-Windsor, eh?'

continue to rig elections in order to maintain their power over the union, and that since voting them out of office will clearly not be permitted While they control the ballot boxes, it is high time that the Trades Union Congress did something about the situation more immediately effective than alternatively passing resolutions and wash- ing their hands of the whole affair.