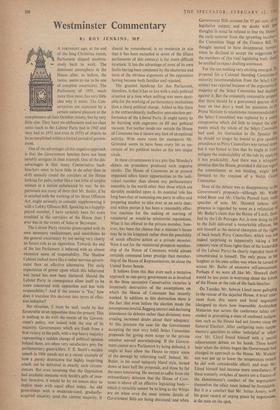 By ROY JENKINS, MP A FORTNIGHT ago, at the end of the long Christmas recess, Parliament slipped unobtru- sively back to work. The dominant atmosphere in the House after, as before, the recess, seems to me to be one of complete uncertainty. The Parliament of 1959, much more than most, has very little idea why it exists. The Con- servatives are sustained by a certain natural pleasure at the completeness of their October victory, but by very little else. They have no enthusiasm and no clear sense (such as the Labour Party had in 1945 and they had in 1951 and even in 1955) of objects to be accomplished within a limited period of govern- ment.

One of the advantages of this negative approach is that the Government benches have not been notably arrogant in their triumph. One of the dis- advantages is that many Conservative back- benchers seem to have little to do other than to drift uneasily round the corridors of the House looking for pairs, rather like a vast tribe of surplus women in a nation unbalanced by war. So im- portunate are many of them that Mr. Butler, if he is satisfied with the working of the Street Offences Act, ought seriously to consider supplementing it with a Lobby Offences Bill. Speaking as a happily- paired member, I have certainly been far more troubled in the corridors of the House than I ever was in the streets of Soho or Bayswater.

The Labour Party remains ireoccupied with its own necessary readjustment, and contributes to the general uncertainty by not seeing very clearly its future role as an opposition. Towards the end of the last Parliament it behaved with an almost excessive sense of responsibility. The Shadow Cabinet looked more like a rather nervous govern- ment than an effective alternative. The early expectation of power upon which this behaviour was based has now been shattered. Should the Labour Party in consequence allow itself to be more concerned with opposition and less with responsibility? And if the answer is 'Yes,' how does it translate this decision into terms of effec- tive initiative?

No situation, it must be said, could be less favourable to an opposition than the present. This is nothing to do with the merits of the Govern- ment's policy, nor indeed with the size of its majority. Governments which are fresh from a first victory at the polls, with a top-heavy majority representing a sudden change of political opinion behind them, are often very satisfactory prey for parliamentary giant-killers. F. E. Smith's maiden speech in 1906 stands out as a classic example of how a purely destructive but highly inspiriting attack can be delivered in exactly such circum- stances. But even assuming that the Opposition had available someone with Smith's gifts of inso- lent invective, it would be by no means easy to deploy them with equal effect today. An old government with a moderate-sized, gradually- acquired majority (and the current majority, it should be remembered, is so moderate in size that it has been exceeded in seven of the fifteen parliaments of this century) is far more diflicult to attack. It has the advantage of most of its own faults having been condoned by the electorate and most of the obvious arguments of the opposition having become both familiar and rejected. - The greatest handicap for this Parliament, therefore, is that it has to live with a stale political situation at a time when nothing was more desir- able for the working of parliamentary institutions than a sharp political change. Added to this there is the extraordinarily ineffective post-election per- formance of the Liberal Party. It ought surely to be bursting with eagerness to fill any political vacuum. Yet neither inside nor outside the House of Commons has it shown any hint of exceptional activity. With more room for rnanceuvre Mr. Grimond seems to have been every bit as un- certain of his political tactics as his two major rivals.

In these circumstances it is a pity that Monday's debate on procedure produced such negative results. The House of Commons as at present organised offers fewer opportunities to the indi- vidual member than almost any parliamentary assembly in the world other than those which are slavishly modelled upon it. Its essential role has long been that of sustaining one party in office and preparing another to take over at an early date; and within parties it has been a reasonably effec- tive machine for the making or marring of ministerial or would-be ministerial reputations. What it has offered to the private member, how- ever, has been the chance that a minister's baton may be in his knapsack rather than the possibility of much effective action as a private member. Were it not for the ministerial prospects member- ship of the House of Commons would almost certainly command lower prestige than member- ship of the House of Representatives, let alone the United States Senate.

It follows from this that even such a tentative approach to one-party government as is involved in the three successive Conservative victories is immensely destructive of the assumptions on which the House of Commons has recently worked. In addition to this destruction there is the fact that even before the election made the assumptions invalid, flagging interest and declining attendance (at debates rather than divisions) were creating increased doubt about their adequacy. At this juncture the case for the Government accepting the (not very bold) Select Committee proposals for giving more scope to the private member seemed overwhelming. If the Govern- ment cannot save Parliament by being defeated, it might at least allow the House to repair some of the damage by reforming itself. Instead, Mr. Butler, in his usual opaquely bland style, turned down at least half the proposals, and those by far the more interesting. He seemed to suffer from the extraordinary delusion that the House of Com- mons is above all an effective legislating body— which it certainly cannot be so long as the Whips are on when even the most minute details of Government Bills are being discussed,' and when Government Bills account for 95 per cent. of tb' legislative output; and no doubt with 1136 thoughts in mind he refused to free the House the early summer from the sprawling incubus 6 the Committee Stage of the Finance Bill. 0 thought seemed to have disappeared, howevet' when he declined to accept the suggestion tI12" the members of this vital legislating body shoe' be entitled to expect drafting assistance.

For the rest nothing very exciting emerged. Tie proposal for a Colonial Standing Committee (3 minority recommendation from the Select COI' mittee) was rejected because of the arguments 1114 majority of the Select Committee had deploy' against it. But the eminently reasonable proP°511 that there should be a guaranteed quarter of at hour on two days a week for questions to 0 Prime Minister (a unanimous recommendation 01 the Select Committee) was replaced. by a u5eles1 compromise which did little to respect the argil' ments which the whole of the Select ,Committet had used. An instruction to the Speaker that he should no longer be bound to give speakill$ precedence to Privy Councillors was turned down, but it was hinted to him that he might in future mitigate the undesirability of the rule by applY134, it less predictably. And there was a whisper promise that the House, provided it did not regal') the commitment as too binding, might 101' forward to the creation of a Welsh Grand Committee.

Most a the debate was as disappointing as the Government's proposals—although. Mr. Wedg' wood. Benn and Mr. Charles Pannell both made speeches of note. Mr. Shinwell (whose veil presence is regarded by some as a refutation oi Mr. Butler's claim that the House of Lords, forti. fled by the Life Peerages Act, is now doing its Ph to the full) delivered a remarkable effusion. He saw himself as the natural champion of the rights of back-bench Privy Councillors, which was not indeed surprising as (apparently taking a less rotatory view of these rights than of the leadershiP of the Labour Party) he clearly regarded. them as concentrated in himself.. The only pause in his laughter at his own sallies was when he turned 10 accuse Mr. Butler of excessive self-amusement. Perhaps if we were all like- Mr. Shinwell there would be less point in worrying about the future of the House or. the role of the back-bencher.

On Tuesday Mr. Selwyn Lloyd came galloping to the rescue of the dejected House. A brief state- ment from this suave and lucid negotiator (designed to show . how impossible ArchbishoP Makarios was across the conference table) sue' ceeded in provoking a state of confused indigna- tion such as the House had not known since the General Election. After castigating most supple' mentary questions as either 'unhelpful' or Wien' sive' Mr. Lloyd found himself with a special • adjournment debate on his hands. Three hours later when the debate began the Government had changed its approach to the House. Mr. Watkin' son was put up to lower the temperature (which he did with considerable effect), and even Mr. Lloyd himself had become more conciliatory. If these masterly switches of tactics are a feature of the Government's, conduct of the negotiations themselves the effect must indeed be formidable. But it is a comfort that Mr. Julian Amery, with his great record of urging peace by negotiation- is the man on the spot.