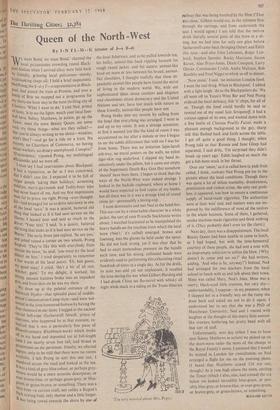 Queen of the North -West

By I-N FL-M--G (creator of J---s B--d) 'WE want Bond, we want Bond,' chanted the local piccaninnies crowding round Black- Pool Station when 1 arrived (they were held back bY friendly, grinning local policemen—sturdy, I°Yal-looking chaps all; I held a brief inspection). Ned Prong, the S--d-y T---s representative in Black- Pool, had joined the train at Preston, and over a bottle of Brie we mapped out a programme for my thirty-Six-hour stay in the most thrilling city of heshire. 'What 1 want to do,' 1 told Ned, Prince ;1_1. hosts, is to see the lights, watch your local foot- °all hero, Sidney Matthews, in action, go up the Tower, meet the town Beduty Queen. eat some r°ck, try those things—what are they called?— that you're always writing to me about—wonkles, aren't they?—and go for a ride on a tram. No maYors, no Chambers of Commerce, no boring 8°, cial-workers, no dreary unemployed. Compris?' 1),accordance,' riposted Prong, my multilingual afficianodo, and we were off. I must say 1 had reservations about Blackpool. n had a reputation, as far as 1 was concerned, that I didn't care for. 1 expected it to be full of Igar people 'taking their holidays,' screaming children, merry-go-rounds and Teddy-boys who had never heard of me. And my first impressions ent far to prove me right. Prong—ever-thought- 1°1—had arranged for us to drive into town in one e,f _. the local 'taxis.' It was a quaint, battered old tning that looked as if it had seen service on the Marne. I leaned over and said as much to the driver, 'Your taxi,' 1 said, Is a civaint, battered old thing that looks as if it had seen service on the Marne.' The surly brute just replied, `So are you,' land jolted round a corner on two wheels. Prong augbed. 'They're like this with everybody from o.otside the town,' he said; 'you must try the local tbalect on him.' 1 tried desperately to remember a f ew words of the local patois. 'Eh, bah goom, good man,' I cried, 'tha't a bit of all reet, w°tcher, garn.' To my delight, it worked; his rong peasant features broke into an impudent grin, and from then on he was my slave. We drew up at the palatial ,entrance of the 'orb reck Hydro—that splendid piece of middle- Period Concentration-Camp style—and were wel- cdomed in the time-honoured fashion by having the ec'r slammed in our faces. I tugged at the ancient erved bell-rope (Sachaverell Sitwell, prince of cicerones, who happened by at that moment, re- Tarked that it was a particularly fine piece of lifteenth-century Rhubbisch-work) which broke (la In my hand and deposited me at full-length "ilid I am nearly seven feet tall, and broad in roPortion) on the pavement. Finally, we effected 1,4r9ss, only to be told that there were no rooms "vallable. 1 left Prong to sort this one out; I andered across the road and looked at the sea. bras w a kind of grey-blue colour, or perhaps grey- Would be a more accurate description, or even brown-blue, or perhaps green-grey, or blue- i.reen, or green-brown, or something. There was a le boat—a curious craft, not unlike a Regent's cark rowing-boat, only shorter and a little longer. t Was being rowed towards the shore by ors, a the local fishermen, and as he pulled towards me, his bulky, animal-like back rippling beneath his rough tweed jacket, and his square, animal-like head set more or less between his broad, animal- like shoulders, I thought ruefully that these de- pendable animal-like people have found the secret of living in the modern world. We, with our sophisticated ideas about comfort and elegance and cleanliness, about democracy and the United Nations and sex, have lost touch with nature as these friendly, animal-like people have not.

Prong broke into my reverie by calling from the hotel that everything was arranged. I went in and up to my room. It was a strange sensation; at first it seemed just like the kind of room I was accustomed to, but after a minute or two I began to see the subtle differences that told me 1 was far from home. There was no imitation lapis-lazuli ash-tray, no travel posters on the walls, no nylon tiger-skin rug underfoot. I slipped my hand in- stinctively under the pillow, but it came out empty of the Supermatic Death-Ray Gun that somehow 'should' have been there. I began to think that the ways of the North-West were indeed strange. I looked in the bedside cupboard, where at home I would have expected to find copies of my books, but all there was in it was a strange kind of round china jar—presumably a loving-cup.

1 went downstairs and met Ned in the hotel-bar. This was run by a remarkable character in a white jacket, the sort of man Prunella Stackhouse writes about; I watched fascinated as he manipulated the heavy handle on the machine from which the local brew ('biter,' it's called) emerged, brown and foaming, into the glasses he held under the spout. He did not look strong, yet it was clear that he had to exert tremendous pressure on the handle each time, and his strong, calloused hands were evidently used to performing this exhausting ritual. hundreds of times in a single day. As for the drink, its taste was odd yet not unpleasant; it recalled the time during the war when Gilbert Harding and I had drunk China tea flavoured with whisky all night while stuck in a siding on the Trans-Siberian

railway that was being bombed by the Hun. (That was close, Gilbert would say, as the splinters flew through the carriage, and from underneath the seat I would agree.) I am told that the natives drink literally several pints of this brew at a sit- ting, but we had time for only one glass before Sechaverell came back (bringing Osbert and Edith this time—and also John Lehmann, Roger Lub- bock, Stephen Spender. Rocky Marciano, Simon Raven, Alan Pryce-Jones, Denis Compton, Larry Olivier, Commander Crabb, Andre Malraux, Bob Boothby and Fred Niggs) to whisk us off to dinner.

'Now mind,' I said, 'no imitation London food. I want the real thing.. When in Blackpool,' I added with a light laugh, 'do as the Blackpoolers do.' We all went off to Yates's Wine Bar and Ned Prong ordered the local delicacy, fish 'n' chips, for all of us. Though the food could hardly be said to remind me of my usual Sole Stroganoff, it had a curious appeal of its own, and washed down with a fine bottle of Chateau Pouilly Fuisse, made a pleasant enough background to the gay, sharp talk that flashed back and forth across the table. I got off quite a good thing. I thought; when Prong told us that Ronnie and June Gleep had separated, I said drily, 'I'M surprised they didn't break up years ago.' Edith laughed so much she got a fish-bone stuck in her throat.

Over our 'sweet,' as it is called here (a pink fruit called, I think, roobub) Ned Prong put me in the picture about the local conditions. Though there was quite a lot of infant mortality, drunkenness, prostitution and violent crime, the only real prob- lem, it appeared, was how to ensure a continuous supply of hand-made cigarettes. The authorities were at their wits' end, and matters were not im- proved by the indifference of most of the natives to the whole business. Some of them, I gathered, smoke machine-made cigarettes and think nothing of it. (They probably don't even ice the claret.) Next day, there was a disappointment. The, local Beauty Queen had been unable to come to lunch, as I had hoped, but with the time-honoured courtesy of these people, she had sent a note with an impromptu witticism to soften the blow. ('Why doesn't he come and see me?' she had written, adding, 'And who is he, anyway?') Instead, Ned had arranged for two teachers from the local school to lunch with us and talk about their town. Mine was called Mary, Ned's Joan. Mine was a merry, black-eyed little creature, but very shy— understandably, I suppose—in my presence; when • I slapped her in a friendly way on the rump she drew back and asked me not to do it again. I understood her to say that she was a PhD of Manchester University; Ned and I roared with laughter at the thought of this merry little animal- like creature bothering her pretty head with all that sort of stuff.

Unfortunately, next day (when I was to have seen Sidney Matthews in action) we picked up on the short-wave radio the news of the change in the Royal Family's name. 1 assumed that I would be wanted in London for consultation, so Ned arranged a flight for me on the morning plane. (I heard that Matthews scored 124 not out, though.) As it rose high above the town, circling the Tower (which I also, alas, had missed) the sea below me looked incredibly blue-green, or pos- sibly blue-grey, or brown-blue, or even grey-green, or brown-grey, or green-brown, or something.