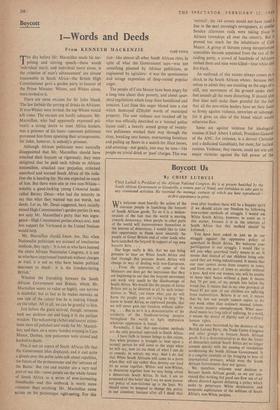 Chief La:hull is President of the African National Congress. He is at present banished by the South African Government to Groutville, a remote part of Natal, and forbidden to take part in any communal activities. He recorded the message, extracts of which are here reproduced— its first appearance in print.

WE welcome most heartily the action of the overseas people in launching the boycott of South African goods. To us it is a demon- stration of the fact that the world is moving towards democracy, when people in other parts of the world will inconvenience themselves in the interest of democracy. I would like to take this opportunity to thank most sincerely the people of Great Britain and of other lands who have launched the boycott in support of our own boycott here. . . .

Our hope really is this, that we can bring pressure to bear on White South Africa and that through this pressure South Africa will change its way of dealing with non-Europeans. . . . From the utterances of some of the Ministers one does get the impression that they are beginning to see that the boycott movement can work very much to the disadvantage of South Africa. We would like the people of Great Britain not to be deterred at all by such intimi- dations as 'Well, you know what you do will harm the people you are trying to help.' We know in South Africa, as oppressed people, that we will never gain our freedom without suffer- ing. . . . But to us it is a demonstration of the solidarity of the freedoom-loving peoples throughout the world to fight oppression wherever oppression is found.

Personally, I feel that non-violent methods are the only practical approach in South Africa. . . . I have faith in human beings to this extent, that when pressure is brought to bear upon a normal person he will come to the stage when he will say, now let me think of what I can do to remedy, to retract, my way. And I do feel that White South Africans will come to a point when they will say rather than destroy our land let us come together, Whites and non-Whites, to determine together how we may bring about a democratic South Africa. In fact, I am so possessed of this belief that I say we must pursue our policy of non-violence up to the limit. We should never be tempted to change this policy in our situation; because after all I think that even after freedom there will be a happier spirit if we should attain our freedom by following non-violent methods of struggle. I would ask White South Africa, however, to assist us in this matter, because it is in the interests of South Africa that this method should be followed. . . .

You have been asked to join us in our struggle against the oppressive policy of apartheid in South Africa. We welcome your participation in our. struggle. I would like to tell you what apartheid really means to us. It means that instead of our children being edu- cated they are being indoctrinated. It means that our men cannot move from country to town, and from one part of town to another without a pass. And now our women, too, will be unable to leave their house without a pass. It means that 70 per cent, of my people live below the bread line. It means that in my own province of Natal 85 per cent, of our children are suffering from malnutrition. Believe it or not, it means that by law our people cannot aspire to do any work other than ordinary manual labour. It means massive unemployment. What apar- theid means is a long tale of suffering. In a word, it means the denial of dignity and of ordinary human rights. . . .

We, therefore, welcome your decision to boycott South African goods, as we are con- vinced that nothing but good can flow out of all efforts directed against defeating a policy which seeks to perpetuate White domination and economic exploitation of the millions of South Africa's non-White peoples.