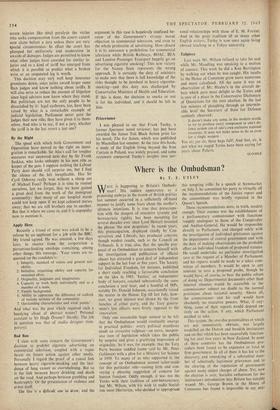 I view with some concern the Government's decision to prohibit cigarette advertising on commercial television, coupled with a vague threat on future action against other media. Personally I regard the proof of a causal link between heavy cigarette-smoking and the inci- dence of lung cancer as overwhelming. But so is the link between heavy drinking and death on the road. And perhaps between gambling and bankruptdy. Or the presentation of violence and crime itself.

The line is a difficult one to draw, and the

argument in this ease is hopelessly confused be- cause of the Government's strange moral objection to commercial television, and even to the whole profession of advertising. How absurd it is to announce a prohibition for commercial television while British Railways, BOAC, BEA and London Passenger Transport happily go on advertising cigarette smoking! This new victory for the Nanny State represents the wrong approach. It is certainly the duty of ministers to make sure that there is full knowledge of the risks thought to be .involved in heavy cigarette- smoking—and this duty was discharged by Conservative Ministers of Health and Education. If this is done, the decision to smoke or not is for the individual, and it should be left to him.