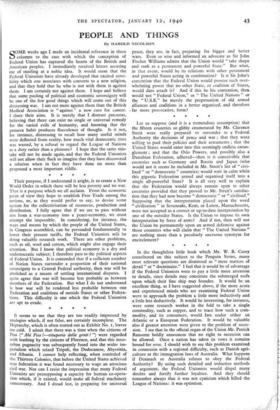 Let us suppose (and it is a tremendous assumption) that

the fifteen countries so glibly enumerated by Mr. Clarence Streit were really prepared to surrender to a Federal Authority the decisions of peace and war ; that they were willing to pool their policies and their armaments ; that the United States would enter into this seemingly endless entan- glement ; and that the Oslo Powers, and possibly also a Danubian Federation, adhered—then is it conceivable that countries such as Germany and Russia and Japan (who would not it seems be included in Mr. Streit's list of " civi- lised " or " democratic " countries) would wait in calm while this gigantic Federation armed and organised itself into a single all-powerful State? It is all very well to explain that the Federation would always remain open to other countries provided that they proved to Mr. Streit's satisfac- tion that they had now become " democratic " or " civilised." Supposing that the interpretation placed upon the word " civilisation " in Sevenoaks, Kent, or Lenox, Massachusetts, were not'accepted as a correct or up-to-date interpretation by one of the outsider States. Is the Union to impose its own interpretation by force of arms? And if not, then will not the Union be permanently upon an armed defensive against those countries who will claim that " The United Nations " are nothing more than a peculiarly unctuous synonym for encirclement?