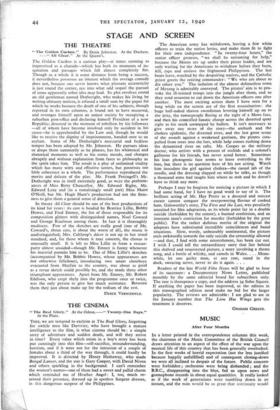 This, we are tempted to exclaim at The Real Glory, forgetting for awhile men like Duvivier, who have brought a mature intelligence to the film, is what cinema should be : a simple story of adventure and sudden death, and will they arrive in time? Every value which exists in a boy's story has been put cunningly into this film—self-sacrifice, misunderstanding, heroism, and if it were not for the intrusion of a couple of females about a third of the way through, it could hardly be improved. It is directed by Henry Hathaway, who made Bengal Lancer, and the star is Gary Cooper, with David Niven and others sparkling in the background. I can't remember the women's names—one of them had a sweet and pallid charm which reminded me of Heather Angel: I, too, much re- sented their presence, dressed up in spotless Sargent dresses, in this dangerous outpost of the Philippines.

The American army has withdrawn, leaving a few white officers to train the native levies, and make them fit to fight for their own independence. " In twenty-four hours," the senior officer protests, " we shall be screaming for help," because the Moros are up under their pirate leader, and are only waiting for the Americans to withdraw before they bum, kill, rape and enslave the frightened Philippinos. The last boats leave, watched by the despairing natives, and the Catholic priest greets the retiring commander : " We who are about to die salute you." The isolation of the almost defenceless town of Mysang is admirably conveyed. The pirates' aim is to pro- voke the ill-trained troops into the jungle after them, and so they send assassins to cut down the American officers one after another. The most exciting action shots I have seen for a long while on the screen are of the first assassination : the huge half-naked shaven swordsman levering himself up on to the jetty, the townspeople fleeing at the sight of a Moro face, and then his controlled fanatic charge across the deserted quay right to his mark unstopped by bullets. It isn't necessary to give away any more of the story—the ambush and the cholera epidemic, the diverted river, and the last great scene of the assault against a weakened garrison, the pirates cata- pulted from trees into the fort, while help comes rushing down the dynamited river on rafts. Mr. Cooper as the military doctor, who arrives with a present of orchids and a colonel's gallstone for his friends, has never acted better. Sometimes his lean photogenic face seems to leave everything to the lens, but there is no question here of his not acting. Watch him inoculate the girl against cholera—the casual jab of the needle, and the dressing slapped on while he talks, as though a thousand arms had taught him where to stab and he doesn't have to think any more.

Perhaps I may be forgiven for noticing a picture in which I had some hand, for I have no good word to say of it. The

brilliant acting of Mr. Hay Petrie as a decayed and outcast curate cannot conquer the overpowering flavour of cooked ham. Galsworthy's story, The First and the Last, was peculiarly unsuited for film adaptation, as its whole point lay in a double suicide (forbidden by the censor), a burned confession, and an innocent man's conviction for murder (forbidden by the great public). For the rather dubious merits of the original the adaptors have substituted incredible coincidences and banal situations. Slow, wordy, unbearably sentimental, the picture reels awkwardly towards the only suicide the censorship allowed —and that, I find with some astonishment, has been cut out. I wish I could tell the extraordinary story that lies behind this shelved and resurrected picture, a story involving a theme song, and a bottle of whisky, and camels in Wales. . . . Mean- while, let one guilty man, at any rate, stand in the dock, swearing never, never to do it again. . . .

Readers of the late World Film News will be glad to hear of its successor : a Documentary News Letter, published monthly by the same editorial board for subscribers only. The rate is threepence a copy, and the address 34 Soho Square. If anything the paper has been improved, as the editors in this roneographed edition need make no bid for the larger popularity. The reviews are admirable : I am glad to see in the January number that The Lion Has Wings gets the treatment it deserves.