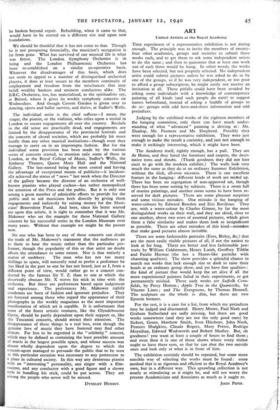 United Artists at the Royal Academy

THIS experiment of a representative exhibition is not daring enough. The principle was to invite the members of twenty- four other academies, groups and societies to submit three works each, and to get them to ask some independent artists to do the same ; and then to guarantee that at least one work out of each three would be hung. In other words, the works have been selected, but not properly selected. No independent artist could submit pictures unless he was asked to do so by one of the groups, so if he was very independent, or too poor to afford a group subscription, he might easily not receive an invitation at all. These pitfalls could have been avoided by asking some individuals with a knowledge of contemporary painting of all kinds (and such people do exist) to suggest names beforehand, instead of asking a huddle of groups to do so: groups with odd here-and-there information and odd prejudices.

Judging by the exhibited works of the eighteen members of the hanging committee, only three can have much under- standing of what " advanced " painting is driving at : Mr. Dunlop, Mr. Pasmore and Mr. Shepherd. Possibly they were enough for a representative exhibition. They were just enough to make the result a curiosity, and just not enough to make it strikingly interesting, which it might have been.

The Academy itself, rightly enough, has a pull. They are At Home, and they hired the furniture and carpets, the deco- rative trees and shrubs. (Thank goodness they did not hire cacti to go with the modern exhibits.) The walls look very much the same as they do at an ordinary Summer Exhibition, without the slick, all-over niceness. There is one excellent feature in the hanging : different kinds of work are mined up. There has been no segregation of non-approved art, though there has been some sorting by subjects. There is a room full of marine paintings, and another room seems to have been re- served for dark pictures. There are some pleasant surprises and some vicious mistakes. One mistake is the hanging of water-colours by Edward Bawden and Eric Ravilious. They are, with a water-colour by Charles Ginner, by far the most distinguished works on their wall, and they are skied, close to one another, above two rows of assorted pictures, which gives them a false similarity and makes them look as insignificant as possible. There are other mistakes of this kind—mistakes that make good pictures almost invisible.

There are some fashionable portraits (Eves, Birley, &c.) that are the most easily visible pictures of all, if not the easiest to look at for long. There are better and less fashionable por- traits by William Coldstream, Henry Lamb, Geoffrey Tibble and Fairlie Harmar (the last a Manet-like pastiche with charming qualities). The show provides a splendid chance to search out works that lack enough size or dash to raise their heads at an ordinary group show, and yet have fine qualities: the kind of picture that would keep the art alive if all the more experimental painters failed in their experiments, or got permanently mislaid. Three such works are Suffolk Corn- fields, by Percy Horton ; Apple Tree in the Quantocks, by Vincent Lines ; and The Evergreens, by Thomas Hennell. The sculpture on the whole is dim, but there are two Epstein bronzes.

For the rest, it is a case for a list, from which my prejudices may be judged and discounted. Henry Moore, Paul Nash and Graham Sutherland are sadly missing, but there are good works somewhere (and they are not the only good ones) by Sicken, Grant, Matthew Smith, Ivon Hitchens, John Nash, Frances Hodgkins, Claude Rogers, Mary Potter, Rodrigo Moynihan, Edward Wadsworth and Robert Medley. But, oh goodness! you want at least a couple of hours to find them ; and even then it is one of those shows where every visitor ought to have three eyes, so that he can shut the two outside ones and look only at what is in front of him.

The exhibition certainly should be repeated, but some more sensible way of selecting the works must be found : some method that is as rigorous and efficient as the Royal Academy's own, but in a different way. This sprawling collection is not nearly as stimulating as it might be, and will not worry the present Academicians and Associates as much as it ought to.