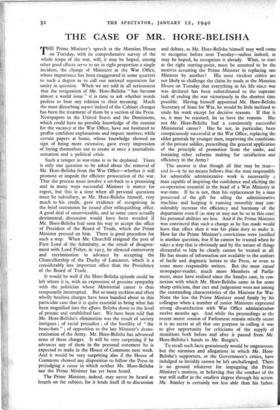 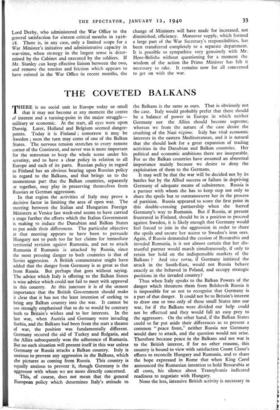 THE CASE OF MR. HORE-BELISHA

THE Prime Minister's speech at the Mansion House on Tuesday, with its comprehensive survey of the whole scope of the war, will, it may be hoped, among other good effects serve to set in right proportion a single incident, the change of Ministers at the War Office, whose importance has been exaggerated in some quarters to such a degree as to call our national reputation for sanity in question. When we are told in all seriousness that the resignation of Mr. Hore-Belisha " has become almost a world issue " it is time to ask whether words profess to bear any relation to their meaning. Much the most disturbing aspect indeed of the Cabinet changes has been the treatment of them by a section of the Press. Newspapers in the United States and the Dominions, which could have no possible knowledge of the reasons for the vacancy at the War Office, have not hesitated to proffer confident explanations and impute motives, while certain papers at home, whose knowledge showed no sign of being more extensive, gave every impression of laying themselves out to create at once a journalistic sensation and a political crisis.

Such a temper in war-time is to be deplored. There is only one question to be asked about the removal of Mr. Hore-Belisha from the War Office—whether it will promote or impede the efficient prosecution of the war. That the process must involve a set-back to a promising and in many ways successful Minister is matter for regret, but this is a time when all personal questions must be subsidiary, as Mr. Hore-Belisha himself, very much to his credit, gave evidence of recognising in the brief statements he issued after relinquishing office. A good deal of unserviceable, and in some cases actually detrimental, discussion would have been avoided if Mr. Hore-Belisha had seen his way to accept the office of President of the Board of Trade, which the Prime Minister pressed on him. There is good precedent for such a step. When Mr. Churchill resigned the post of First Lord of the Admiralty, as the result of disagree- ment with Lord Fisher, in 1915, he silenced controversy and recrimination in advance by accepting the Chancellorship of the Duchy of Lancaster, which is a considerably less important office than the Presidency of the Board of Trade.

It would be well if the Hore-Belisha episode could be left where it is, with an expression of genuine sympathy with the politician whose Ministerial career is thus temporarily interrupted. But so many reckless and often wholly baseless charges have been bandied about in this particular case that it is quite essential to bring what has been magnified into the affaire Belisha down to the level of prosaic and established fact. We have been told that Mr. Hore-Belisha's elimination was the result of society intrigues ; of racial prejudice ; of the hostility of " the brass-hats " ; of opposition to the late Minister's demo- cratisation of the Army. Mr. Hore-Belisha has advanced none of these charges. It will be very surprising if he advances any of them in the personal statement he is expected to make in the House of Commons next week. And it would be very surprising also if the House of Commons showed any disposition to follow the Press in prejudging a cause in which neither Mr. Hore-Belisha nor the Prime Minister has yet been heard.

The Prime Minister, indeed, may never be heard at length on the subject, for it lends itself ill to discussion and debate, as Mr. Hore-Belisha himself may well come to recognise before next Tuesday—unless indeed, as may be hoped, he recognises it already. What, to start at the right starting-point, must be assumed to be the motives actuating the Prime Minister in replacing one Minister by another? His most virulent critics are not likely to challenge the claim he made at the Mansion House on Tuesday that everything in his life since war was declared has been subordinated to the supreme task of ending the war victoriously in the shortest time possible. Having himself appointed Mr. Hore-Belisha Secretary of State for War, he would be little inclined to undo his work except for decisive reasons. If that is so, it may be rejoined, let us have the reasons. Has not Mr. Hore-Belisha had a consistently successful Ministerial career? Has he not, in particular, been conspicuously successful at the War Office, replacing the older generals by younger men, improving the conditions of the private soldier, prescribing the general application of the principle of promotion from the ranks, and initiating other reforms making for satisfaction and efficiency in the Army?

The answer is that though all that may be true— and is—it by no means follows that the man responsible for admirable administrative work is necessarily a man capable of inspiring the confidence and eliciting the co-operation essential in the head of a War Ministry in war-time. If he is not, then his replacement by a man possessed of the gift for oiling the administrative machine and keeping it running smoothly may con- siderably increase the efficiency and harmony of the department even if (as may or may not be so in this case) his personal abilities are less. And if the Prime Minister was convinced that such a change as he has made would have that effect then it was his plain duty to make it. How far the Prime Minister's convictions were justified is another question, but if he cannot be trusted when he takes a step that is obviously and by the nature of things distasteful to him he clearly cannot be trusted at all. He has means of information not available to the authors of facile and dogmatic letters to the Press, or even to some more responsible writers. But the most casual newspaper-reader, much more Members of Parlia- ment, must have realised since the Sandys case, in con- nexion with which Mr. Hore-Belisha came in for some sharp criticism, that tact and judgement were not among the outstanding characteristics of the Minister for War. None the less the Prime Minister stood firmly by his colleague when a number of junior Ministers expressed strong dissatisfaction with War Office administration twelve months ago. And while the proceedings at the recent secret session of Parliament remain strictly secret it is no secret at all that one purpose in calling it was to give opportunity for criticisms of the supply of munitions both before and after it passed from Mr. Hore-Belisha's hands to Mr. Burgin's.

To recall such facts gratuitously would be ungenerous, but the surmises and allegations in which Mr. Hore- Belisha's supporters, or the Government's critics, have indulged so lavishly cannot be left unchallenged. There is no ground whatever for impugning the Prime Minister's motives, or believing that the conduct of the war will suffer in the smallest degree through his action. Mr. Stanley is certainly not less able than his father, Lord Derby, who administered the War Office to the general satisfaction for sixteen critical months in 1916- 18. There is, in any case, only a limited scope for a War Minister's initiative and administrative capacity in war-time, when strategy in the largest sense is deter- mined by the Cabinet and executed by the soldiers. If Mr. Stanley can keep effective liaison between the two, and remove the tension and friction which appears to have existed in the War Office in recent months, the change of Ministers will have made for increased, not diminished, efficiency. Moreover supply, which formed a large part of the War Secretary's responsibilities, has been transferred completely to a separate department. It is possible to sympathise very genuinely with Mr. Hore-Belisha without questioning for a moment the wisdom of the action the Prime Minister has felt it necessary to take. It remains now for all concerned to get on with the war.