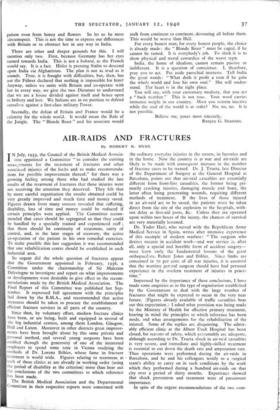 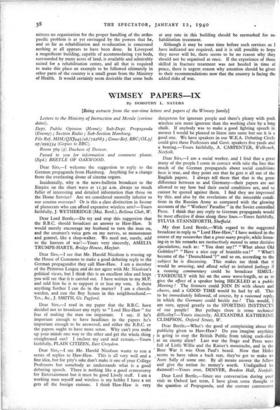 IN July, 1933, the Council of the British Medical Associa- tion appointed a Committee " to consider the existing arrangements for the treatment of fractures and other associated injuries of the limbs and to make recommenda- tions for possible improvement thereof," for there was a growing feeling among those who had studied the late results of the treatment of fractures that these injuries were not receiving the attention they deserved. They felt that by more careful organisation the results obtained could be very greatly improved and much time and money saved. Figures drawn from many sources revealed that suffering, disability, loss of time and money could be reduced if certain principles were applied. The Committee recom- mended that cases should be segregated so that they could be handled by a specially trained and experienced staff ; that there should be continuity of treatment, unity of control, and, in the later stages of recovery, the active co-operation of the patient in his own remedial exercises. To make possible this last suggestion it was recommended that one rehabilitation centre should be established in each industrial area.

So urgent did the whole question of fractures appear that the Government appointed in February, 1936, a Committee under the chairmanship of Sir Malcolm Delevingne to investigate and report on what improvements or developments were desirable to give effect to the recom- mendations made by the British Medical Association. The Final Report of this Committee was published last Sep- tember. It expressed full agreement with the principles laid down by the B.M.A., and recommended that active measures should be taken to procure the establishment of efficient fracture services in all parts of the country.

Since then, by voluntary effort, modern fracture clinics have been, or are being, built and equipped in several of the big industrial centres, among them London, Glasgow, Hull and Luton. Moreover in other districts great improve- ments have been brought about by this same private and personal method, and several young surgeons have been enabled through the generosity of one of the interested employers to spend some time in Vienna studying the methods of Dr. Lorenz BOhler, whose fame in fracture treatment is world wide. Figures relating to treatment at such of these clinics as are already in working order (using the period of disability as the criterion) more than bear out the conclusions of the two committees to which reference has been made.

The British Medical Association and the Departmental Committee in their respective reports were concerned with the ordinary everyday injuries in the streets, in factories and in the home. Now the country is at war and air-raids are likely to be made with consequent increase in the number of fracture cases to be treated. Dr. J. Trueta, late Director of the Department of Surgery at the General Hospital at Barcelona, points out that air-raid casualties are essentially different from front-line casualties, the former being pri- marily crushing injuries, damaging muscle and bone, the latter often being penetrating wounds, requiring different methods of treatment. If the lives of those injured in an air-raid are to be saved, the patients must be taken direct from the site of the explosion to the hospitals, with- out delay at first-aid posts, &c. Unless they are operated upon within two hours of the injury, the chances of survival are very materially lessened.

Dr. Tudor Hart, who served with the Republican Army Medical Service in Spain, writes after intensive experience of this example of modern warfare : " The surgeon who desires success in accident work—and war service is, after all, only a special and horrible form of accident surgery— must learn early the fundamental lessons of the great orthopaedists, Robert Jones and Miler. Since limbs are concerned in 70 per cent. of all war injuries, it is essential that the wartime general surgeon should have had personal experience in the modern treatment of injuries in peace- time."

Impressed by the importance of these conclusions, I have made some enquiries as to the type of organisation established by the Government to deal with the large number of fractures that might be expected to occur in the very near future. (Figures already available of traffic casualties bear out this expectation.) I asked what provision was being made by the Ministry of Health for effective primary treatment, bearing in mind the principles to which reference has been made, and what arrangements for the rehabilitation of the injured. Some of the replies are disquieting. The admir- ably efficient clinic at the Albert rock Hospital has been closed, for reasons of safety, which presumably are adequate, although according to Dr. Trueta shock in air-raid casualties is very severe, and immediate and highly-skilled treatment is essential to cut down the death rate and amputation rate. Thus operations were performed during the air-raids in Barcelona, and he and his colleagues testify to a surgical team's ability to carry on in such conditions by the work which they performed during a hundred air-raids on that city over a period of thirty months. Experience showed that shock prevention and treatment were of paramount importance.

In spite of the urgent recommendations of the two com- mittees no organisation for the proper handling of the ortho- paedic problem is as yet envisaged by the powers that be, and so far as rehabilitation and re-education is concerned nothing at all appears to have been done. In Liverpool a magnificent building, capable of accommodating 15o beds, surrounded by many acres of land, is available and admirably suited for a rehabilitation centre, and all that is required to make this place an example to be followed ultimately in other parts of the country is a small grant from the Ministry of Health. It would certainly seem desirable that some beds at any rate in this building should be earmarked for re- habilitation treatment.

Although it may be some time before such services as I have indicated are required, and it is still possible to hope they never will be, there seems to be no reason why they should not be organised at once. If the experience of those skilled in fracture treatment was not heeded in time of peace, there is urgent reason why attention should be given to their recommendations now that the country is facing the added risks of war.