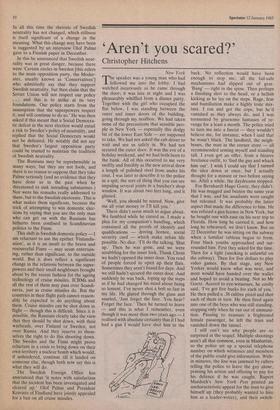 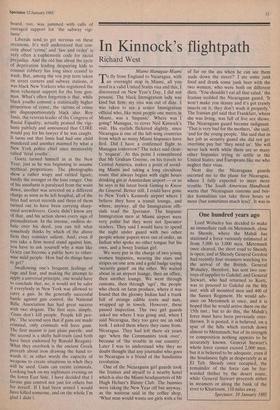 New York The speaker was a young man who had followed me into the lobby. I had watched incuriously as he came through the door; it was late at night and I was pleasurably whiffled from a dinner party. Together with the girl who occupied the flat below, I was standing between the outer and inner doors of the building, going through my mailbox. We had taken none of the precautions that sensible peo- ple in New York — especially this dodgy bit of the lower East Side — are supposed to take. We had not asked the cab driver to wait and see us safely in. We had not secured the outer door. It was the eve of a holiday weekend, and we had both been to the bank. All of this occurred to me very swiftly and forcibly as the new arrival drew a length of polished steel from under his coat. I was later to describe it to the police as a spit; the sort of thing that you can see impaling several joints in a butcher's shop window. It was about two feet long, and it glinted.

`Well, you should be scared. Now, give me all your money or I'll kill you.'

There didn't seem much to argue about. We fumbled while he cursed us. I made a plea for my companion's handbag, which contained all the proofs of identity and qualifications — driving licence, social security card — which make Urban life possible. No dice. `I'll do the talking. Shut up.' Then he was gone, and we were scrabbling for the inner lock. Thank Christ we hadn't opened the inner door. You read of people forced to open up their flats. Sometimes they aren't found for days. And we still hadn't secured the outer door. And suddenly he was back, loping up the steps as if he had changed his mind about being so lenient. I've never shot a bolt so fast in my life. He glared through the glass and snarled, 'Just forget the face. You hear? Forget the face.' Then he turned to leave — and this is what I remember, even though it was more than two years ago — I realised with absolute certainty that if I had had a gun I would have shot him in the back. No reflection would have been enough to stop me; all the fail-safe mechanisms had slipped out of gear. 'Bang' — right in the spine. Then perhaps a finishing shot to the head, or a hellish kicking as he lay on the steps. Rage, fear and humiliation make a highly toxic mix- .ture. I ran and got the cops, but he'd vanished as they always do, and I was tormented by gruesome fantasies of re- venge for a least a month. The police tried to turn me into a fascist — they wouldn't believe me, for instance, when I said that he wasn't black. The landlord, the neigh- bours, the man in the corner store — all recommended arming myself and standing tall. I even got an offer, from a bizarre freelance outfit, to `find the guy and whack him out'. I wish I could say that I turned the idea down at once, but I actually thought for a minute or two before saying no. After a while, the daydreams stopped.

For Bernhardt Hugo Goetz, they didn't. He was mugged and beaten the same year that I was, and his assailants were caught but released. It was probably the latter aspect that made the difference to him. He was refused a gun licence in New York, but he bought one with ease on his next trip to Florida. How long he carried it, and how long he rehearsed, we don't know. But on 22 December he was sitting on the subway when a familiar tableau began to form. Four black youths approached and sur- rounded him. First they asked for the time. Then for a light (smoking is unlawful on the subway). Then for five dollars to play video games. By that stage, any New Yorker would know what was next, and most would have handed over the wallet and hoped to avoid a beating. Not so Mr Goetz. Accord to eye-witnesses, he coolly said, Tye got five bucks for each of you.' He then pulled a .38 calibre pistol and shot each of them in turn. He then fired again into one of the boys who was still standing, stopping only when he ran out of ammuni- tion. Pausing to reassure a frightened female passenger, he left the train and vanished down the tunnel.

I still can't see why people are so surprised at the sequel. Multiple shootings aren't all that common, even in Manhattan, so the police set up a special telephone number on which witnesses and members of the public could give information. With- in minutes, the line was jammed by callers telling the police to leave the guy alone, praising his action and offering to pay for his defence if he was caught. Rupert Murdoch's New York Post printed an uncharacteristic appeal for the man to give himself up (they probably wanted to hire him as a leader-writer), and their switch-

board, too, was jammed with calls of outraged support for 'the subway vigi- lante'.

Liberals tend to get nervous on these occasions. It's well understood that con- cern about 'crime' and law and order' is very often a euphemistic code for racial prejudice. And the old line about the cycle of deprivation leading despairing kids to commit robbery has long since ceased to wash. But, among the vox pop tests taken on street corners and subway stations, it was black New Yorkers who registered the most vehement support for the lone gun- man. What's often forgotten is that, while black youths commit a statistically higher proportion of crime, the victims of crime are disproportionately black also. Roy Innis, the veteran leader of the Congress of Racial Equality, actually praised the vigi- lante publicly and announced that CORE would pay for his lawyer if he was caught. It turns out that Innis had had one child murdered and another maimed by what a New York police chief once memorably called 'feral youths'.

Goetz turned himself in at the New Year, just as he was beginning to assume mythical proportions. The photographs show a rather wispy and rattled figure; hardly the avenger or the lone ranger. One of his assailants is paralysed from the waist down, another was arrested on a different charge as soon as he left hospital, all of the boys had arrest records and three of them turned out to have been carrying sharp- ened screwdrivers. Goetz didn't know any of that, and his action shows every sign of premeditation. In the intense, endless de- bate over his deed, you can tell what somebody thinks by which of the above facts they consider salient. And, even if You take a firm moral stand against him, you have to ask yourself why a man like Goetz can become a public hero to other- wise mild people. How bad do things have to get?

, Swallowing one's frequent feelings of rage and fear, and making the attempt to

apply a universal principle, one would have to conclude that, no, it would not be safer if everybody in New York was allowed to carry a gun. In the generally successful battle against gun control, the National Rifle Association has had great success With two slogans. The first says, simply, 'Guns don't kill people. People kill peo- ple.' The second says that if guns are made criminal, only criminals will have guns.

The first maxim is just plain puerile, and the second is a shifty half-truth (and both have been endorsed by Ronald Reagan).

What they overlook is the ancient Greek proverb about iron drawing the hand to- wards it; in other words the capacity of weapons to create situations in whch they will be used. Guns can create criminals.

Looking back on my nightmare evening on the lower East Side, I have decided that I favour gun control not just for others but for myself. If I had been armed I would have killed someone, and on the whole I'm glad I didn't.