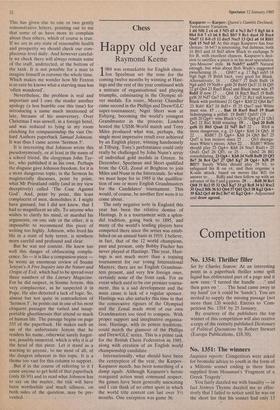 1 984 was remarkable for English chess. IJon Speelman set the tone for the coming twelve months by winning at Hast- ings and the rest of the year continued with a mixture of organisational and playing triumphs, culminating in the Olympic sil- ver medals. En route, Murray Chandler came second in the Phillips and Drew/GLC super-tournament; Nigel Short won at Esbjerg, becoming the world's youngest Grandmaster in the process; London hosted the USSR-World match and Tony Miles produced what was, perhaps, the single most impressive result ever achieved by an English player, winning handsomely at Tilburg. Tony's performance could only really be challenged by John Nunn's array of individual gold medals in Greece. In December, Speelman and Short qualified from the CGL Zonal at Brighton to join Miles and Nunn in the Interzonals. So what we must hope for in 1985 is the qualifica- tion of one or more English Grandmasters for the Candidates' tournament. This would, of course, be another first were it to come about.

The only negative note in England this year has been the relative demise of Hastings. It is a tournament with a splen- did, tradition, going back to 1895, and many of the world's leading players have competed there since the series was estab- lished on an annual basis in 1919. I believe, in fact, that of the 12 world champions, past and present, only Bobby Fischer has never played at Hastings. This year, Hast- ings is not much more than a training tournament for our young International Masters; there are no English Grandmas- ters present, and very few foreign ones, certainly none of the front rank. For an event which used to be our premier tourna- ment, this is a sad development and the main cause is lack of a regular sponsor. Hastings was also unlucky this time in that the consecutive rigours of the Olympiad and the Zonal made most of our own Grandmasters too tired to compete. With proper support and imaginative organisa- tion, Hastings, with its potent traditions, could match the glamour of the Phillips and Drew/GLC series. This is a prime task for the British Chess Federation in 1985, along with creation of an English world championship candidate.

Internationally, what should have been the centrepiece of the year, the Karpov- Kasparov match, has been something of a damp squib. Although Kasparov's heroic rearguard action must command respect, the games have been generally unexciting and I can think of no other sport in which the world title contest can last over 31/2 months. One exception was game 36: