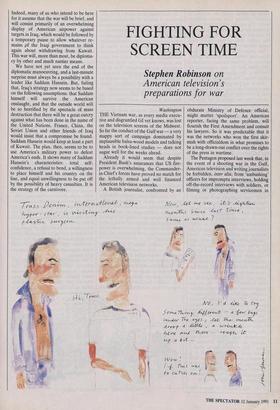 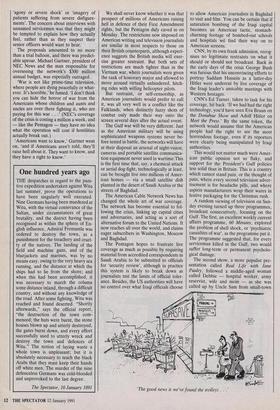 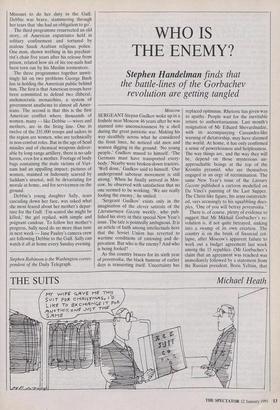 Washington THE Vietnam war, as every media execu- tive and disgruntled GI vet knows, was lost on the television screens of the Midwest. So far the conduct of the Gulf war — a very mappy sort of campaign dominated by implausible balsa-wood models and talking heads in book-lined studies — does not augur well for the weeks ahead.

Already it would seem that despite President Bush's assurances that US fire- power is overwhelming, the Commander- in-Chief's forces have proved no match for the lethally armed and well financed American television networks.

A British journalist, confronted by an obdurate Ministry of Defence official, might mutter 'spoilsport'. An American reporter, facing the same problem, will flourish the First Amendment and consult his lawyers. So it was predictable that it was the networks who won the first skir- mish with officialdom in what promises to be a long-drawn-out conflict over the rights of the press in wartime.

The Pentagon proposed last week that, in the event of a shooting war in the Gulf, American television and writing journalists be forbidden, inter alia, from 'ambushing' officers for impromptu interviews, holding off-the-record interviews with soldiers, or filming or photographing servicemen in `agony or severe shock' or 'imagery of patients suffering from severe disfigure- ments'. The concern about interviews with unnamed servicemen was that they might be tempted to explain how they actually feel, rather than as they suspect their senior officers would want to hear.

The proposals amounted to no more than a trial balloon, and there was predict- able uproar. Michael Gartner, president of NEC News and the man responsible for overseeing the network's $300 million annual budget, was especially outraged.

War is not like prime-time television, where people are dying peacefully or what- ever. It's horrible,' he fumed. 'I don't think you can hide the horror of war from the Americans whose children and aunts and uncles are over there fighting it, who are paying for this war . . .' (NEC's coverage of the crisis is costing a million a week, and — like the Pentagon — they have no idea what the operation will cost if hostilities actually break out.) `Americans want to know,' Gartner went on, 'and if Americans aren't told, they'll raise hell about it. They want to know, and they have a right to know.' We shall never know whether it was that prospect of millions of Americans raising hell in defence of their First Amendment rights, but the Pentagon duly caved in on Monday. The restrictions now imposed on American writing and television journalists are similar in most respects to those on their British counterparts, although experi- ence suggests the British media will exer- cise greater restraint. But both sets of restrictions are much tighter than in the Vietnam war, where journalists were given the rank of honorary major and allowed to move around virtually unhindered, hitch- ing rides with willing helicopter pilots.

But restraint, or self-censorship, as American journalists would prefer to call it, was all very well in a conflict like the Falklands, when distinctly fuzzy shots of combat only made their way onto the screen several days after the actual event.

The Gulf war will be very different. Just as the American military will be using sophisticated weapons systems never be- fore tested in battle, the networks will have at their disposal an arsenal of night-vision, cameras and portable satellite communica- tion equipment never used in wartime.This is the first time that, say, a chemical attack or aerial dog-fight, technologically at least, can be brought live into millions of Amer- ican homes — via a small satellite dish planted in the desert of Saudi Arabia or the streets of Baghdad.

The American Cable Network News has changed the whole art of war coverage. The network has become essential to fol- lowing the crisis, linking up capital cities and adversaries, and acting as a sort of alternative forum to the United Nations. It now reaches all over the world, and claims eager subscribers in Washington, Moscow and Baghdad.

The Pentagon hopes to frustrate live coverage as much as possible by requiring material from accredited correspondents in Saudi Arabia to be submitted to officials for 'security review', although in practice this system is likely to break down as journalists test the limits of official toler- ance. Besides, the US authorities will have no control over what Iraqi officials choose to allow American journalists in Baghdad to visit and film. You can be certain that if saturation bombing of the Iraqi capital becomes an American tactic, stomach- churning footage of bombed-out schools and hospitals wil find their way on to American screens.

CNN, by its own frank admission, recog- nises no legitimate restraints on what it should or should not broadcast. Back in the early days of the crisis George Bush was furious that his unconvincing efforts to portray Saddam Hussein as a latter-day Hitler were undercut by live coverage of the Iraqi leader's amicable meetings with Western hostages.

CNN's Ed Turner, taken to task for his coverage, hit back: 'If we had had the right technology, you'd have seen Eva Braun on the Donahue Show and Adolf Hitler on Meet the Press.' By the same token, the network would assume that the American people had the right to see the most horrendous footage, even if its reporters were clearly being manipulated by Iraqi authorities.

This would not matter much were Amer- ican public opinion not so flaky, and support for the President's Gulf policies less solid than in Britain. This is a country which cannot stand pain, or the thought of pain, where every second television adver- tisement is for headache pills, and where aspirin manufacturers wrap their wares in festive packaging for the Christmas rush.

A random viewing of television on Sun- day evening turned up three programmes, broadcast consecutively, focusing on the Gulf. The first, an excellent weekly current affairs programme, 60 Minutes, explored the problem of shell shock, or 'psychiatric casualties of war', as the programme put it. The programme suggested that, for every serviceman killed in the Gulf, two would suffer long-term or permanent psycholo- gical damage.

The good news is we've found the trolleys . Missouri to do her duty in the Gulf. Debbie was brave, stammering through her tears that 'she had an obligation to go'.

The third programme resurrected an old story, of American expatriates held in solitary confinement and tortured by zealous Saudi Arabian religious police. One man, shown writhing in his psychiat- rist's chair five years after his release from prison, related how six of his toe-nails had been torn out by his Muslim tormentors.

The three programmes together unwit- tingly hit on two problems George Bush has in holding the American public behind him. The first is that American troops have been committed to defend two illiberal, undemocratic monarchies, a system of government anathema to almost all Amer- icans. The second is that this is the first American conflict where thousands of women, many — like Debbie — wives and mothers, are in the firing line. One in twelve of the 335,000 troops and sailors in the region are women, who are technically in non-combat roles. But in the age of Scud missiles and of chemical weapons deliver- able by long-range artillery, there is no safe haven, even for a mother. Footage of body bags containing the male victims of Viet- nam had an appalling impact; pictures of women, maimed or hideously scarred by Saddam's arsenal, will be devastating for morale at home, and for servicemen on the ground.

Debbie's young daughter Sally, tears cascading down her face, was asked what she most feared about her mother's depar- ture for the Gulf. 'I'm scared she might be killed,' the girl replied, with simple and poignant candour. To follow her mother's progress, Sally need do no more than tune in next week — Jane Pauley's camera crew are following Debbie to the Gulf. Sally can watch it all at home every Sunday evening.

Stephen Robinson is the Washington corres- pondent of the Daily Telegraph.