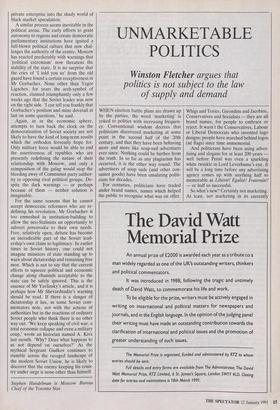 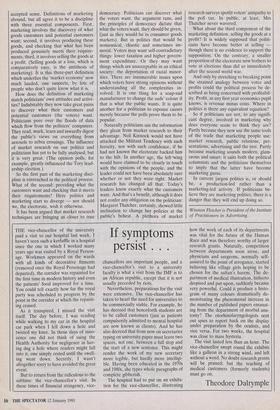 politics is not subject to the law of supply and demand

WHEN election battle plans are drawn up by the parties, the word 'marketing' is yoked to politics with increasing frequen- cy. Conventional wisdom decrees that politicians discovered marketing at some point in the second half of the 20th century, and that they have been behaving more and more like soap-sud advertisers ever since. Nothing could be further from the truth. In so far as any plagiarism has occurred, it is the other way round. The advertisers of soap suds (and other con- sumer goods) have been emulating politi- cians for decades.

For centuries, politicians have traded under brand names, names which helped the public to recognise what was on offer. Whigs and Tories, Girondins and Jacobins, Conservatives and Socialists — they are all. brand names, for people to embrace or reject. It wasn't the Conservatives, Labour or Liberal Democrats who invented logo• designs; people have marched behind logos. (nei flags) since time immemorial.

And politicians have been using adver- tising and slogans for at least 200 years well before Persil was even a sparkling white twinkle in Lord Leverhume's eye. It will be a long time before any advertising agency comes up with anything half so memorable as Liberte! Egalite! Fraternite! — or half so successful.

accepted sense. Definitions of marketing abound, but all agree it to be a discipline with three essential components. First, marketing involves the discovery of what goods customers and potential customers want; second, it involves producing these goods, and checking that what has been produced genuinely meets their require- ments; third, it involves selling the goods at a profit. (Selling goods at a loss, which is comparatively easy, is the antithesis of marketing). It is this three-part definition which underlies the 'market economy' now much lauded, one suspects, by lots of people who don't quite know what it is.

How does the definition of marketing match politicians' own attitudes and activi- ties? Indubitably they now take great pains to discover what their customers and potential customers (the voters) want. Politicians pore over the floods of data which flow from the pollsters' computers. They read, mark, learn and inwardly digest the public's views on everything from aerosols to zebra crossings. The influence of market research on our politics and politicians has yet to be fully analysed; but it is very great. (The opinion polls, for example, greatly influenced the Tory lead- ership election.) So the first part of the marketing disci- pline is entrenched in the political process. What of the second: providing what the customers want and checking that it meets their requirements? Here politics and marketing start to diverge — nor should we, the electorate, wish it otherwise.

It has been argued that market research techniques are bringing us closer to true democracy. Politicians can discover what the voters want, the argument runs, and the principles of democracy dictate that what the voters want, they should be given, (just as they would be in consumer goods markets). But in politics that would be nonsensical, chaotic and sometimes im- moral. Voters may want self-contradictary things: lower taxation and higher govern- ment expenditure. Or they may want things which are unacceptable in an ethical society: the deportation of racial minor- ities. There are innumerable issues upon which voters have strong opinions without understanding all the complexities in- volved. It is one thing for a soap-sud manufacturer to change the suds' colour if that is what the public wants. It is quite another for a politician to espouse causes merely because the polls prove them to be popular.

Naturally politicians use the information they glean from market research to their advantage. Neil Kinnock would not have attacked the Militant Tendency with such ferocity, nor with such confidence, if he had not known the electorate backed him to the hilt. In another age, the left 'wing would have claimed to be closely in touch with the opinions of the people, and the leader could not have been absolutely sure whether or not they were right. Market research has changed all that. Today's leaders know exactly what the customers want. And that's a benefit, although it does not confer any obligation on the politician: Margaret Thatcher, certainly, showed little inclination to change her policies at the public's behest. A plethora of market research surveys spotlit voters' antipathy to the poll tax. In public, at least, Mrs Thatcher never wavered.

What about the third component of the marketing definition, selling the goods at a profit? It is widely supposed that politi- cians have become better at selling though there is no evidence to support the supposition. On the contrary, a smaller proportion of the electorate now bothers to vote at elections than did so immediately after the second world war.

And only by stretching to breaking point the strained analogy between votes and profits could the political process be de- scribed as being concerned with profitabil- ity. Profit, as any first year economics pupil knows, is revenue minus costs. Where in politics is there any equivalent equation?

So if politicians are not, to any signifi- cant degree, involved in marketing why does everyone seem to think they arc? Partly because they now use the same tools of the trade that marketing people use: market research, public relations, pre- sentations, advertising and the rest. Partly because marketing sounds modern, glam- orous and smart: it suits both the political columnists and the politicians themselves to imply that the latter have become marketing gurus.

In current jargon politics is, or should be, a production-led rather than a marketing-led activity. If politicians be- lieve they are marketing politics, there is a danger that they will end up doing so.

Winston Fletcher is President of the Institute of Practitioners in Advertising.