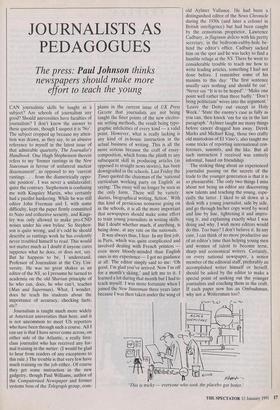 newspapers should make more effort to teach the young

CAN journalistic skills be taught as a subject? Are schools of journalism any good? Should universities have faculties of journalism? I don't know the answer to these questions, though I suspect it is 'No'. The subject cropped up because my atten- tion was drawn, as they say, to an abusive reference to myself in the latest issue of that admirable quarterly, The Journalist's Handbook. One Hugh Stephenson therein refers to my 'former rantings in the New Statesman in favour of unilateral nuclear disarmament', as opposed to my 'current rantings . . . from the diametrically oppo- site position'. I was never a unilateralist; quite the contrary. Stephenson is confusing me with Kingsley Martin, who certainly had a pacifist hankering. While he was still editor John Freeman and I, with some difficulty, kept the paper firmly committed to Nato and collective security, and Kings- ley was only allowed to make pro-CND noises under his own byline. So Stephen- son is quite wrong, and it's odd he should describe as rantings work he has evidently never troubled himself to read. This would not matter much as I doubt if anyone cares tuppence what he does, or does not, say. But he happens to be, I understand, Professor of Journalism at the City Uni- versity. He was no great shakes as an editor of the NS, so I presume he turned to academia on the old Shavian principle of he who can, does, he who can't, teaches (Man and Superman). What, I wonder, does he teach his students about the importance of accuracy, checking facts, etc?

Journalism is taught much more widely at American universities than here, and it is not uncommon to meet US reporters who have been through such a course. All I can say is that I have never come across, on either side of the Atlantic, a really first- class journalist who has received any for- mal training in the métier. (I would be glad to hear from readers of any exceptions to this rule.) The trouble is that very few have much training on the job either. Of course they get some instruction in the new gadgetry, though Paul Williams, author of the Computerised Newspaper and former systems boss of the Telegraph group, com- plains in the current issue of UK Press Gazette that journalists are not being taught the finer points of the new electro- nic setting methods, the result being typo- graphic infelicities of every kind — a valid point. However, what is really lacking is any kind of in-house instruction in the actual business of writing. This is all the more serious because the craft of essay- composition, which forms the plinth to any subsequent skill in producing articles (as opposed to straight news stories), has been downgraded in the schools. Last Friday the Times quoted the chairman of the 'national curriculum working party on English' as saying: 'The essay will no longer be seen as the only form. There will be variety: diaries, biographical writing, fiction.' With this kind of pernicious nonsense going on in the schools, it is all the more important that newspapers should make some effort to train young journalists in writing skills. But I doubt whether much, if anything, is being done, at any rate on the nationals.

It was always thus, I fear. In my first job, in Paris, which was quite complicated and involved dealing with French printers even more bloody-minded than English ones in my experience — I got no guidance at all. The editor simply said to me: 'Oh good, I'm glad you've arrived. Now I'm off for a month's skiing,' and left me to it. I learned a lot during that month but I had to teach myself. I was more fortunate when I joined the New Statesman three years later because I was then taken under the wing of old Aylmer Valiance. He had been a distinguished editor of the News Chronicle during the 1930s (and later a colonel in British intelligence) but had been caught by the censorious proprietor, Lawrence Cadbury, in flagrante delicto with his pretty secretary, in the bedroom-cubby-hole be- hind the editor's office. Cadbury sacked him on the spot and he was lucky to find a humble refuge at the NS. There he went to considerable trouble to teach me how to write leading articles, something I had not done before. I remember some of his maxims to this day: 'The first sentence usually says nothing and should be cut.' `Never say "It is to be hoped".' Make one point well rather than three badly.' Don't bring politicians' wives into the argument.' `Leave the Deity out except in Holy Week.' State the enemy's case as fully as you can, then knock 'em for six in the last paragraph.' Aylmer taught me many things before cancer dragged him away. Derek Marks and Michael King, those two crafty old mastodons of El Vino's, also taught me some tricks of reporting international con- ferences, summits, and the like. But all such instruction I received was entirely informal, based on friendship.

The striking thing about an experienced journalist passing on the secrets of the trade to the younger generation is that it is so pleasurable. The only two things I miss about not being an editor are discovering new talents and teaching the young, espe- cially the latter. I liked to sit down at a desk with a young journalist, side by side, and go through his/her copy word by word and line by line, tightening it and impro- ving it, and explaining exactly what I was doing and why. I wish more editors would do this. Too busy? I don't believe it. In any case, I can think of no more productive use of an editor's time than helping young men and women of talent to become terse, sharp and economical writers. Certainly, on every national newspaper, a senior member of the editorial staff, preferably an accomplished writer himself or herself, should be asked by the editor to make a special point of seeking out the younger journalists and coaching them in the craft. If each paper now has an Ombudsman, why not a Writersman too?

`This is tricky — everyone who took the placebo got better.'