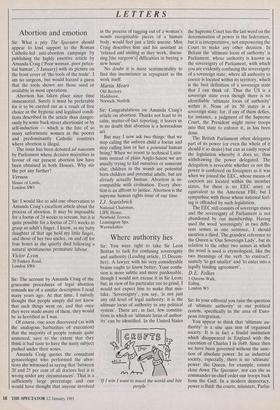 Sir: What a pity The Spectator should appear to lend support to the Roman Catholic-led anti-abortion campaign by publishing the highly emotive article by Amanda Craig (Poor woman, poor poten- tial human', 5 January) with its picture on the front cover of 'the tools of the trade'. I am no surgeon, but would hazard a guess that the tools shown are those used or available in most operations, Abortion has taken place since time immemorial. Surely it must be preferable for it to be carried out as a result of free choice in the hygienic and legalised condi- tions described in the article than danger- ously by some back-street abortionist or by self-induction — which is the fate of so many unfortunate women in the poorer and predominantly Catholic countries where abortion is illegal.

The issue has been debated ad nauseam by Parliament where decisive majorities in favour of our present abortion law have been obtained in both Houses. Why stir the pot any further?