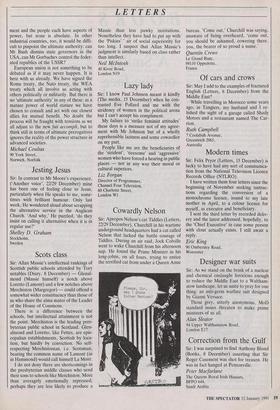 Sir: Apropos Nelson's cat Tiddles (Letters, 22/29 December), Churchill in his wartime underground headquarters had a cat called Nelson that lacked the battle courage of Tiddles. During an air raid, Jock Colville went to wake Churchill from his afternoon nap. He found the Prime Minister in his long-johns, on all fours, trying to entice the terrified cat from under a Queen Anne bureau. 'Come out,' Churchill was saying, unaware of being overheard, 'come out, you should be ashamed, cowering there, you, the bearer of so proud a name.'