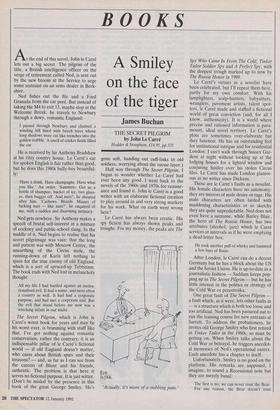 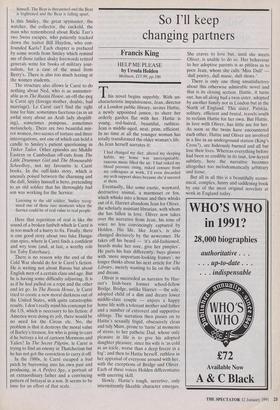 BOOKS A t the end of this novel, John le Carre

lets out a big secret. The pilgrim of the title, a British intelligence officer on the verge of retirement called Ned, is sent out by the new broom at the Service to urge some restraint on an arms dealer in Berk- shire.

Ned fishes out the file and a Ford Granada from the car pool. But instead of taking the M4 to exit 13, maybe stop at the Welcome Break, he travels to Newbury through a dewy, romantic England:

I passed through Newbury and climbed a winding hill lined with beech trees whose long shadows were cut like trenches into the golden stubble. A smell of cricket fields filled the car.

He is received by Sir Anthony Bradshaw at his ritzy country house. Le Carre's ear for spoken English is fair rather than good, but he does this 1980s bully-boy beautiful- ly:

'Have a drink. Have champagne. Have what you like.' An order: 'Summers. Get us a bottle of shampoo, bucket of ice, two glass- es, then bugger off. And nuts!', he shouted after him. 'Cashews. Brazils. Masses of fucking nuts — like nuts?', he enquired of me, with a sudden and disarming intimacy.

Ned gets nowhere. Sir Anthony makes a speech of brutal self-interest in a mixture of cockney and public-school slang. In the middle of it, Ned begins to realise that his secret pilgrimage was vain: that the long and patient war with Moscow Centre, the unearthing of the Circus mole, the running-down of Karla left nothing to spare for the true enemy of old England, which is a sort of spruced-up Tebbitism. The book ends with Ned lost in melancholy thought: All my life I had battled against an institu- tionalised evil. It had a name, and most often a country as well. It had had a corporate purpose, and had met a corporate end. But the evil that stood before me now was a wrecking infant in our midst . .

The Secret Pilgrim, which is John le Carre's worst book for years and may be his worst ever, is brimming with stuff like that. I've got nothing against romantic conservatism, rather the contrary: it is an indispensable pillar of le Carre's fictional world — if old England doesn't matter, who cares about British spies and their treasons? — and, as far as I can see from the careers of Blunt and his friends, authentic. The problem is that here it serves no fictional purpose. It is just witter. (Don't be misled by the presence in this book of the great George Smiley. He's A Smiley

on the face of the tiger

gone soft, handing out cuff-links to old soldiers, worrying about the ozone layer.) Half way through The Secret Pilgrim, I began to wonder whether Le Carre had ever been any good. I went back to the novels of the 1960s and 1970s for reassur- ance and found it. John le Cane is a good writer with an elaborate fictional creation to play around in and very strong markets for his work. What on earth went wrong here?

Le Carre has always been erratic. His spy fiction has always shown peaks and troughs. For my money, the peaks are The R013. • •

`Actually, it's more of a stabbing pain.' Spy Who Came In From The Cold, Tinker Tailor Soldier Spy and A Perfect Spy, with the deepest trough marked up to now by The Russia House in 1989.

Le Carre's virtues as a novelist have been celebrated, but I'll repeat them here, partly for my own comfort. With his lamplighters, scalp-hunters, babysitters, wranglers, pavement artists, talent spot- ters, le Carre made and staffed a fictional world of great conviction (and, for all I know, authenticity). It is a world where precise and rationed information is para- mount, ideal novel territory. Le Carre's plots are sometimes over-elaborate but they function. He has an outstanding feel for institutional intrigue and for residential London: I can't walk through Sussex Gar- dens at night without looking up at the lodging houses for a lighted window and conjuring Smiley over his stolen Circus files. Le Cane has made London glamor- ous as no writer since Dickens.

These are le Carre's faults as a novelist. His female characters have no autonomy: they are mirrors of male desire or rage. His male characters are often larded with maddening characteristics or so sketchy they are quite unpredictable. Ned does not even have a surname, while Barley Blair, the hero of The Russia House, has two attributes (alcohol, jazz) which le Carre services at intervals as if he were emptying a dead-letter box:

He took another pull of whisky and hummed a few bars of Basie.

After London, le Carre can do a decent Germany but he has a block about the US and the Soviet Union. He is up-to-date in a journalistic fashion — Saddam keeps pop- ping up in The Secret Pilgrim — but he has little interest in the politics or strategy of the Cold War or perestroika.

One great fault of The Secret Pilgrim a fault which, as it were, lets other faults in — is a structure which is both too loose and too artificial. Ned has been pastured out to run the training course for new entrants at Sarratt. To address the probationers, he invites old George Smiley who first retired in Tinker Tailor in the 1960s, so must be getting on. When Smiley talks about the Cold War or betrayal, he triggers anecdot- al memories of Ned's operational career. Each anecdote has a chapter to itself.

Unfortunately, Smiley is no good on the platform. His remarks are supposed, I imagine, to sound a Recessional note but they are merely banal:

The structure also allows le Cant to do nothing about Ned, who is as unmemor- able as in The Russia House, an off-the-peg le Cane spy (foreign mother, doubts, bad marriage). Le Cane can't find the right tone for him: sometimes facetious (as in an awful story about an Arab lady shoplift- ing), sometimes pompous, sometimes melancholy. There are two beautiful mir- ror women, two scenes of torture and three interrogations, not one of which can hold a candle to Smiley's patient questioning in Tinker Tailor. Other episodes are Middle Eastern or Cambodian off-cuts from The Little Drummer Girl and The Honourable Schoolboy, not my favourite le Cant books. In the cuff-links story, which is uneasily poised between the charming and the daft, Smiley himself is hero, pretending to an old soldier that his thoroughly bad son was working for the Service:

Listening to the old soldier, Smiley recog- nised one of those rare moments when the Service could be of real value to real people.

Here that repetition of real is like the sound of a broken fanbelt which le Carre is in too much of a hurry to fix. Finally, there is one good story about two fake Hunga- rian spies, where le Cane finds a confident and wry tone (and, at last, a worthy role for Toby Esterhase).

There is no reason why the end of the Cold War should do for le Carre's fiction. He is writing not about Russia but about English men of a certain class and age. But he is having some difficulty adjusting. It is as if he had pulled on a rope and the other end let go. In The Russia House, le Carre tried to create a new moral darkness out of the United States, with quite catastrophic results. I don't really mind his contempt for the US, which is necessary to his fiction: if America were doing its job, there would be no need for the Circus etc. No, the problem is that it destroys the moral value of Barley's treason, for who is going to care if he betrays a lot of cartoon Mormons and Yalies? In The Secret Pilgrim, le Carre is trying to find an enemy in Thatcherism but he has not got the conviction to carry it off.

In the 1980s, le Carre escaped a bad patch by burrowing into his own past and

producing, in A Perfect Spy, a portrait of an extraordinary father and a convincing pattern of betrayal in a son. It seems to be time for an effort of that scale.