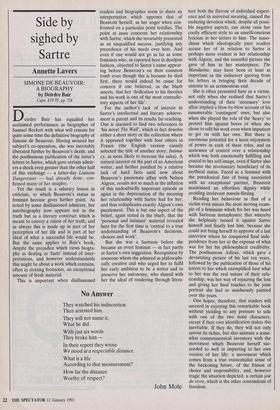 Side by sighed by Sartre

SIMONE DE BEAUVOIR: A BIOGRAPHY by Deirdre Bair Cape, L19.95, pp.718 Deirdre Bair has equalled her acclaimed performance as biographer of Samuel Beckett with what will remain for quite some time the definitive biography of Simone de Beauvoir. Having secured her subject's co-operation, she was inevitably liberated further by Beauvoir's death; and the posthumous publication of the latter's letters to Sartre, which gave certain admir- ers a shock even greater than the other half of this exchange — a latter-day Liaisons Dangereuses — had already done, con- firmed many of her insights.

Yet the result is a salutary lesson in criticism, to which Beauvoir's status as feminist heroine gives further point. As noted by some disillusioned admirers, her autobiography now appears not as the truth but as a literary construct which is meant to convey a vision of her truth; and as always this is made up in part of her perception of her life and in part of her ideal of what a successful life would be. But the same applies to Bair's book, despite the prejudice which views biogra- phy as dealing in 'facts' instead of inter- pretations, and however understandable this might be about a work which contains, often in riveting footnotes, an exceptional amount of fresh material.

This is important when disillusioned readers and biographer seem to share an interpretation which opposes that of Beauvoir herself, as her anger when con- fronted on a particular point testifies. The point at issue concerns her relationship with Sartre, which she invariably presented as an unqualified success, justifying any precedence of his needs over hers. And even if one would not go as far as some feminists who, as reported here in deadpan fashion, objected to Sartre's name appear- ing before Beauvoir's on their common tomb even though this is because he died first, there would indeed be cause for concern if one believed, as the blurb asserts, that her 'dedication to his theories and his work is one of the most contradic- tory aspects of her life'.

For the author's lack of interest in Sartre's intellectual and literary achieve- ment is patent and its results far-reaching. One is alarmed to find two references to `his novel The Wall', which in fact denotes either a short story or the collection where it appeared together with four others in France (the English version cannily selected the title of another story, Intima- cy, as more likely to increase the sales). A natural interest on the part of an American writer, and further justified by a relative lack of hard facts until now about Beauvoir's passionate affair with Nelson Algren, results not so much in the inflation of this undoubtedly important episode as again in the depreciation of the meaning her relationship with Sartre had for her, and thus reduplicates exactly Algren's own puzzlement. This is but one aspect of the belief, again stated in the blurb, that the `personal and intimate' material revealed here for the first time is `central to a true understanding of Beauvoir's decisions, choices and work'.

But she was a Sartrean before she became an overt feminist — in fact partly at Sartre's own suggestion. Recognition by someone whom she admired as philosophi- cally creative and who urged her to fulfil her early ambition to be a writer and to preserve her autonomy, who shared with her the ideal of rendering through litera- ture both the flavour of individual experi- ence and its universal meaning, caused the enduring devotion which, despite all possi- ble negative aspects, can alone raise her coolly efficient style to an unselfconscious lyricism in her letters to him. The maso- chism which ideologically pure readers accuse her of in relation to Sartre is perhaps more evident in her relationship with Algren, and the resentful picture she gave of him in her masterpiece, The Mandarins, may have been at least as important as the indiscreet quoting from his letters in bringing their decade of entente to an acrimonious end.

She is often presented here as a victim, not only when she realised that Sartre's understanding of their 'necessary' love affair implied a blow-by-blow account of his innumerable 'contingent' ones, but also when she played the role of the 'heavy' to protect him against bores or when she chose to edit his work even when impatient to get on with her own. But there is enormous potential for a keen enjoyment of power in each of these roles, and an assurance of control over a relationship which was both emotionally fulfilling and crucial to her self-image, even if Sartre also became the involuntary beneficiary of its mythical status. Faced as a feminist with the paradoxical fate of being associated with an exceptional partner, Beauvoir maintained an effortless dignity while avoiding irrelevant muscle-flexing.

Reading her behaviour as that of a victim even misses the most moving exam- ple of a feminism which for her was fused with Sartrean metaphysics; that whereby she helplessly turned it against Sartre himself and finally lost him, because she could not bring herself to approve of a last interview where he conquered final inde- pendence from her at the expense of what was for her his philosophical credibility. The posthumous Adieux, which gave a devastating picture of his last ten years, followed by the publication of those of his letters to her which exemplified best what to her was the real nature of their rela- tionship, was her way of repairing the loss and giving her final touches to the joint portrait she had so assiduously painted over the years.

One hopes, therefore, that readers will succeed in enjoying this remarkable book without yielding to any pressure to side with one of the two main characters, except if their own identification makes this inevitable. If they do, they will not only savour its riches, but also animate a some- what commonsensical inventory with the movement which Beauvoir herself suc- ceeded so well in imparting to her own version of her life: a movement which comes from a true existentialist sense of the beckoning future, of the frisson of choice and responsibility, and, however tragic the situation depicted, a certain joie de vivre, which is the other concomitant of freedom.