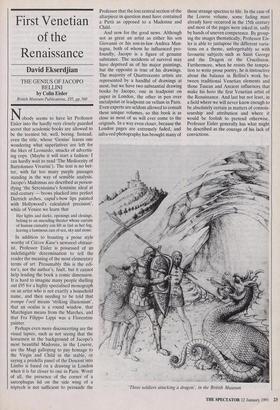 First Venetian of the Renaissance

THE GENIUS OF JACOPO BELLINI by Colin Eisler

Nobody seems to have let Professor Eisler into the hardly very closely guarded secret that academic books are allowed to be the teeniest bit, well, boring. Instead, even the title, whose 'Genius' leaves one wondering what superlatives are left for the likes of Leonardo, smacks of advertis- ing copy. (Maybe it will start a fashion: I can hardly wait to read 'The Mediocrity of Bartolomeo Vivarini'). The text is no bet- ter, with far too many purple passages standing in the way of sensible analysis. Jacopo's Madonnas are described as person- ifying 'the Serenissima's feminine ideal at

mid-century brows plucked into perfect Dietrich arches, cupid's-bow lips painted with Hollywood's calculated precision', while of Venice we learn that

Her lights and darks, openings and closings, belong to an unending theater whose curtain of human carnality can lift as fast as her fog, leaving a luminous cast of sea, sky and stone.

In addition to boasting a prose style worthy of Citizen Kane's newsreel obituar- ist, Professor Eisler is possessed of an indefatigable determination to tell the reader the meaning of the most elementary terms of art. Presumably this is the edi- tor's, not the author's, fault, but it cannot help lending the book a comic dimension. It is hard to imagine many people shelling out £95 for a highly specialised monograph on an artist who is not exactly a household name, and then needing to be told that trompe l'oeil means 'striking illusionism', that an oculus is a round window, that Marchigian means from the Marches, and that Fra Filippo Lippi was a Florentine painter.

Perhaps even more disconcerting are the visual lapses, such as not seeing that the horsemen in the background of Jacopo's most beautiful Madonna, in the Louvre, are the Magi galloping to pay homage to the Virgin and Child in the stable, or saying a predella panel of the Descent into Limbo is based on a drawing in London when it is far closer to one in Paris. Worst of all, the presence of the corner of a sarcophagus lid on the side wing of a triptych is not sufficient to persuade the Professor that the lost central section of the altarpiece in question must have contained a Pieta as opposed to a Madonna and Child.

And now for the good news. Although not as great an artist as either his son Giovanni or his son-in-law Andrea Man- tegna, both of whom he influenced pro- foundly, Jacopo is a figure of genuine substance. The accidents of survival may have deprived us of his major paintings, but the opposite is true of his drawings. The majority of Quattrocento artists are represented by a handful of drawings at most, but we have two substantial drawing books by Jacopo, one in leadpoint on paper in London, the other in pen over metalpoint or leadpoint on vellum in Paris. Even experts are seldom allowed to consult these unique volumes, so this book is as close as most of us will ever come to the originals. In a way even closer, because the London pages are extremely faded, and infra-red photography has brought many of these strange spectres to life. In the case of the Louvre volume, some fading must already have occurred in the 15th century and most of the pages were inked in, sadly by hands of uneven competence. By group- ing the images thematically, Professor Eis- ler is able to juxtapose the different varia- tions on a theme, unforgettably so with favourite subjects such as Saint George and the Dragon or the Crucifixion. Furthermore, when he resists the tempta- tion to write prose poetry, he is instructive about the balance in Bellini's work be- tween traditional Venetian elements and those Tuscan and Ancient influences that make his hero the first Venetian artist of the Renaissance. And last but not least, in a field where we will never know enough to be absolutely certain in matters of connois- seurship and attribution and where it would be foolish to pretend otherwise, Professor Eisler generally has what might be described as the courage of his lack of convictions.

'Three soldiers attacking a dragon', in the British Museum