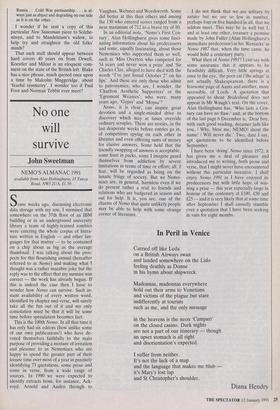 No one will survive

Some weeks ago, discussing electronic data storage with my son, I surmised that somewhere on the 37th floor of an IBM building or in an underground university library a team of highly-trained zombies were entering the whole corpus of litera- ture written in English — and other lan- guages for that matter — to be contained on a chip about as big as the average thumbnail. I was talking about the pros- pects for this flourishing annual (hereafter referred to as Nemo) and making what I thought was a rather macabre joke but the reply was to the effect that my surmise was correct — the work has already begun. If this is indeed the case then I have to wonder how Nemo can survive. Such in- stant availability of every written word, identified by chapter and verse, will surely take all the fun out of it and my only consolation must be that it will be some time before speculation becomes fact.

This is the 100th Nemo. In all that time it has only had six editors (how unlike some of our own publications!) who have de- voted themselves faithfully to the main purpose of providing a mixture of irritation and pleasure to us Nemoniacs who are happy to spend the greater part of their leisure time over most of a year in precisely identifying 73 quotations, some prose and some in verse, from a wide range of sources. In 1990 we were expected to identify extracts from, for instance, Ack- royd, Arnold and Auden through to

Vaughan, Webster and Wordsworth. Some did better at this than others and among the 130 who entered scores ranged from a near maximum of 712 to a brave try of 80.

In an editorial note, `Nemo's First Cen- tury', Alan Hollinghurst gives some fasci- nating information about his predecessors and some, equally fascinating, about those Nemoniacs who supported them so well, such as 'Miss Overton who competed for 54 years and never won a prize' and 'Sir Charles Clay, alleged to have died with the words "I've just found October 2" on his lips'. And these are only those who admit to patronymics; who are, I wonder, the `Charlton Aesthetic Supporters' or the Egremont Weanies'; who were, many years ago, 'Gypsy' and `Mopsa'?

Nemo, it is clear, can inspire great devotion and a single-minded drive to discovery which may at times override ordinary scruples. There are stories, in the last desperate weeks before entries go in, of competitors spying on each other in libraries and even offering sums of money for elusive answers. Some hold that the friendly swapping of answers is acceptable, some hunt in packs, some I imagine guard themselves from addiction by severe limitations in terms of time or effort; all, I fear, will be regarded as being on the lunatic fringe of society. But we Nemo- niacs are, in general, harmless even if we do present rather a trial to friends and relations who are badgered in season and out for help. It is, you see, one of the charms of Nemo that quite unlikely people may be able to help with some strange corner of literature. I do not think that we are solitary by nature but we are so few in number, perhaps four or five hundred in all, that we seldom meet. This may be as well but I, and at least one other, treasure a promise made by John Fuller (Alan Hollinghurst's immediate predecessor) in his 'Remarks' in Nemo 1987 that, when the time came, he would hold a centenary party.

What then of Nemo 1991? I can say with some assurance that it appears to be fiendishly difficult. Very little springs at once to the eye, 'the poor cat i'the adage' is not actually Shakespearean, there is a fearsome page of Aunts and another, more accessible, of Lords. A quotation that appeared to shout Brideshead does not appear in Mr Waugh's text. On the cover, Alan Hollinghurst has, 'Who lasts a Cen- tury can have no flaw,' and, at the bottom of the last page 6 December is, 'Dear boy, with such good reading, dreamer lads like you, / Why, bless me, NEMO! shout the name! / Will never die.' Two, dare I say, apt quotations to be identified before September.

I have been 'doing' Nemo since 1972; it has given me a deal of pleasure and introduced me to writing, both prose and verse, that I might never have encountered without this particular incentive. I shall enjoy Nemo 1991 as I have enjoyed its predecessors but with little hope of win- ning a prize — this year especially large in honour of the centenary at £100, £50 and £25 — and it is very likely that at some time after September I shall casually stumble ever a quotation that I have been seeking in vain for eight months.