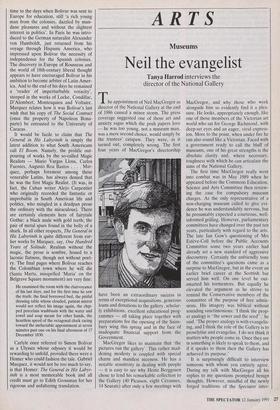 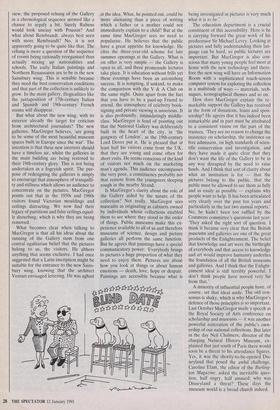 Tanya Harrod interviews the director of the National Gallery

The appointment of Neil MacGregor as director of the National Gallery at the end of 1986 caused a minor storm. The press coverage suggested one of those art and anxiety sagas which the posh papers love — he was too young, not a museum man, was a mere second choice, would simply be the trustees' catspaw. They were, as it turned out, completely wrong. The first four years of MacGregor's directorship

have been an extraordinary success in terms of exceptional acquisitions, generous loans and donations to the gallery, scholar- ly exhibitions, excellent educational prog- rammes — all taking place together with preparations for the opening of the Sains- bury wing this spring and in the face of inadequate financial support from the Government.

MacGregor likes to maintain that 'the pictures run the gallery'. This rather mad- dening modesty is coupled with special charm and manifest niceness. He has a notable sensitivity in dealing with people — it is easy to see why Heinz Berggruen chose to lend his remarkable collection to the Gallery (40 Picassos, eight Cezannes, 14 Seurats) after only a few meetings with MacGregor, and why those who work alongside him so evidently find it a plea- sure. He looks, appropriately enough, like one of those members of the Victorian art world who sat for George Richmond, with deep-set eyes and an eager, vivid express- ion. More to the point, when under fire he can also sound like a Victorian. Faced with a government ready to call the bluff of museums, one of his great strengths is the absolute clarity and, where necessary, toughness with which he can articulate the aims of the National Gallery.

The first time MacGregor really went into combat was in May 1989 when he appeared before the Commons Education, Science and Arts Committee then review- ing the case for compulsory museum charges. As the only representative of a non-charging museum called to give evi- dence he was understandably nervous, but he presumably expected a courteous, well- informed grilling. However, parliamentary committees have changed over the past ten years, particularly with regard to the arts. The late Ian Gow's questioning of Mrs Esteve-Coll before the Public Accounts Committee some two years earlier had already set a new standard of aggressive discourtesy. Certainly the unfriendly tone of the committee's questions came as a surprise to MacGregor, but in the event an earlier brief career at the Scottish bar served him well. On one level he out- .smarted his tormentors. But equally he elevated the argument as he strove to remind the Conservative members of the committee of the purpose of free admis- sions. His imagery was biblical without sounding sanctimonious: 'I think the prop- er analogy is "the sower and the seed",' he said. 'The proper analogy is with evangelis- ing, and I think the role of the Gallery is to proselytise and evangelise. I do not think it matters why people come in. Once they are in something is likely to speak to them, and if it speaks to them then the Gallery has achieved its purpose.'

It is surprisingly difficult to interview someone with whom you entirely agree. During my talk with MacGregor all his replies to my questions prompted benign thoughts. However, mindful of the newly forged traditions of the Spectator inter-

view, the proposed rehang of the Gallery in a chronological sequence seemed like a chance to argufy a bit. Surely Rubens would look uneasy with Poussin? And what about Rembrandt, always best seen with more Rembrandt? No, it is not apparently going to he quite like that. The rehang is more a question of the sequence of rooms being rationally reorganised than actually mixing up nationalities and schools. The early Italian paintings and Northern Renaissance are to be in the new Sainsbury wing. This is sensible because they need the best conservation conditions and that part of the collection is unlikely to grow. In the main gallery, illogicalities like the juxtaposition of 17th-century Italian and Spanish and 19th-century French rooms will disappear.

But what about the new wing, with its exterior already the target for criticism from architectural journalists? The new galleries, MacGregor believes, 'are going to be some of the most beautiful museum spaces built in Europe since the war'. The intention is that these new interiors should have a timeless air, whilst the galleries in the main building are being restored to their 19th-century glory. This is not being undertaken in a fogeyish spirit. The pur- pose of redesigning the galleries is simply to encourage that atmosphere of tranquilli- ty and stillness which allows an audience to concentrate on the pictures. MacGregor points out that in the 1950s and 1960s visitors found Victorian mouldings and ceilings distracting. We now find their legacy of partitions and false ceilings equal- ly disturbing, which is why they are being removed.

What becomes clear when talking to MacGregor is that all his ideas about the running of the Gallery stem from one central egalitarian belief that the pictures belong to us, the visitors. He abhors anything that seems exclusive. I had once suggested that a Latin inscription might be suitable for the entrance to the new Sains- bury wing, knowing that the architect Venturi envisaged lettering. He was aghast at the idea. What, he pointed out, could be more alienating than a piece of writing which a father or a mother could not immediately explain to a child? But at the same time MacGregor sees no need to popularise. He believes that the public have a great appetite for knowledge. He cites the three-year-old scheme for late summer openings at the Gallery. What is on offer is very simple — the Gallery is open to all, and three promenade lectures take place. It is education without frills yet these evenings have been an astonishing success. It is tempting, if unkind, to make the comparison with the V & A Club on the same night. Quite apart from the fact that you have to be a paid-up Friend to attend, the atmosphere of celebrity book- signing and private viewing is unserious. It is also profoundly, intimidatingly middle- class. MacGregor is fond of pointing out that the National Gallery was deliberately built in the heart of the city, in 'the gangway of London', as the 19th-century Lord Dover put it. He is pleased that at least half his visitors come from the UK, that they are young and come often for short visits. He seems conscious of the kind of visitors not much on the marketing man's agenda. This audience encompasses the very poor, a constituency probably not that remote from the youngsters sleeping rough in the nearby Strand.

Is MacGregor's clarity about the role of the Gallery aided by the nature of the collection? Not really. MacGregor sees museums as originating as cabinets owned by individuals whose collections enabled them to see where they stood in the order of things. Public museums make this ex- perience available to all of us and therefore museums of science, design and picture galleries all perform the same function. But he agrees that paintings have a special communicatory power: 'Everybody brings to pictures a huge proportion of what they need to enjoy them. Pictures are about how you look at things or about human emotions — death, love, hope or despair. Paintings are accessible because what is

being investigated in pictures is very much what it is to be.'

The education department is a crucial constituent of this accessibility. Here is he is carrying forward the great work of his predecessor Sir Michael Levey. Looking at pictures and fully understanding their lan- guage can be hard, so public lectures are important. But MacGregor is also con- scious that many young people feel most at home with the new technology and there- fore the new wing will have an Information Room with a sophisticated touch-screen computer system for exploring the collection in a multitude of ways — materials, tech- niques, iconographical themes and so on.

How does MacGregor explain the re- markable support the Gallery has received in the form of donations, loans and spon- sorship? He agrees that it has indeed been remarkable and in part must be attributed to a consistent vision on the part of the trustees. 'They see no reason to change the insistence on scholarship, the insistence on free admission, on high standards of scien- tific conservation and investigation, and they have made it quite clear that they don't want the life of the Gallery to be in any way disrupted by the need to raise funds. And I think that sort of clarity about what an institution is for — that the pictures belong to the public, that the public must be allowed to see them as fully and as easily as possible — explains why people want to help. It has been articulated very clearly over the past ten years and particularly in the last two annual reports.' No, he hadn't been too ruffled by the Commons committee's questions last year: `They asked the right sort of question. I think it became very clear that the British museums and galleries are one of the great products of the Enlightenment. The belief that knowledge and art were the birthright of everybody and that access to knowledge and art would improve humanity underlies the foundation of all the British museums and galleries. And I think that the Enlight- enment ideal is still terribly powerful. I don't think people have moved very far from that.'

A minority of influential people have, of course, set that ideal aside. The old con- sensus is shaky, which is why MacGregor's defence of those principles is so important. Last October MacGregor made a speech at the Royal Society of Arts conference on scholarship and museums — it was another powerful reiteration of the public's own- ership of our national collections. But later in the day Neil Chalmers, director of the charging Natural History Museum, ex- plained that just south of Paris there would soon be a threat to his attendance figures. Yes, it was the shortly-to-be-opened Dis- neyland that posed the awful challenge. Caroline Elam, the editor of the Burling- ton Magazine, asked the inevitable ques- tion, half angry, half amused: why was Disneyland a threat? These days the museum world is a broad church indeed.