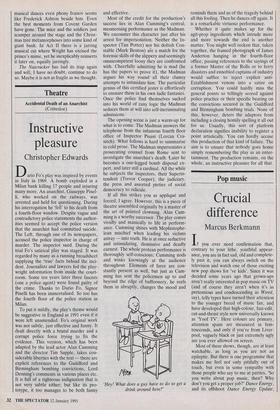 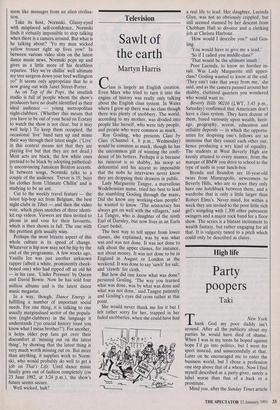 If you ever need confirmation that, contrary to your lithe, youthful appear- ance, you are in fact sad, old and complete- ly past it, you can always switch on the television and watch one of those exciting new pop shows for 'ye kids'. Since it was decided some years ago that grown-ups aren't really interested in pop music on TV (and of course they aren't when it's as pretentious and condescending as Wired, say), telly types have turned their attention to the younger breed of music fan, and have developed that high-colour, fast-edit, cut-and-thrust style now universally known as `Yoof TV'. Here colours are primary, attention spans are measured in fern- toseconds, and only if you're from Liver- pool, vaguely black or just extremely ugly are you ever allowed on screen.

Most of these shows, though, are at least watchable, as long as you are not an epileptic. But there is one programme that makes me feel not only pitifully out of touch, but even in some sympathy with those people who say to me at parties, 'So you write about pop music, then? Why don't you get a proper job?' Dance Energy, and its offshoot Dance Energy Update,

Take its host, Normski. Glassy-eyed with misplaced self-confidence, Normski finds it virtually impossible to stop talking when there is a camera around. But what is he talking about? 'Yo my man wicked yellow trouser right up fives yow!' In between various video slots on the latest dance music news, Normski pops up and gives us a little more of his deathless repartee. `Hey we're chillin' well ultimate my tree surgeon down your beef wellington yo!' It seems only appropriate that he is now going out with Janet Street-Porter.

As on Top of the Pops, the smallish studio is full of people whom the show's producers have no doubt identified as their ideal audience — young metropolitan night-clubbers. (Whether this means that you have to be out of your head on Ecstasy to watch the show is not clear, but it may well help.) To keep them occupied, the occasional 'live' band turn up and mime their way through their latest single. (`Live' in this context means not that they are playing live but that they are not dead.) Most acts are black; the few white ones pretend to be black by adopting pathetical- ly unconvincing Jamaican Brixton accents. In between songs, Normski talks to a couple of the audience. Trevor is 19, buys his clothes from Ultimate Chillin' and is studying to be an ant.

Cut to the weekly travel feature — the latest hip-hop act from Belgium, the best night-clubs in Tibet — and then the video vote, which plays snatches of three identi- kit rap videos. Viewers are then invited to phone in and vote for their favourite, which is then shown in full. The one with the prettiest girls usually wins.

Perhaps the most bizarre aspect of this whole culture is its speed of change. Whatever is hip now may not be hip by the end of the programme. A few weeks ago, Vanilla Ice was just another unknown rapper (albeit a white, prominently cheek- boned one) who had ripped off an old hit — in his case, 'Under Pressure' by Queen and David Bowie. Now he has sold four million albums and is the latest dance music megastar.

In a way, though, Dance Energy is fulfilling a number of important social needs. For one thing, it is talking to one usually marginalised sector of the popula- tion (night-clubbers) in the language it understands (`yo crucial history toast you know what I mean brother?'). For another, it helps older pop fans get over their discomfort at `missing out on the latest thing', by showing that the latest thing is very much worth missing out on. But more than anything, it supplies work to Norm- ski, who would probably do well to get a job on That's Life. Until dance music finally goes out of fashion completely (on 23 June 1992, at 3:24 p.m.), the show's future seems secure.