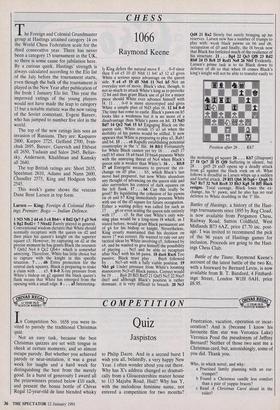 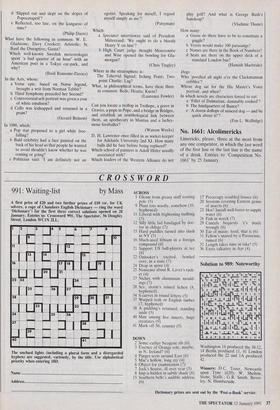 In Competition No. 1658 you were in- vited to parody the traditional Christmas quiz.

Not an easy task, because the best Christmas quizzes are set with tongue in cheek at certain moments, and so almost escape parody. But whether you achieved parody or near-imitation, it was a great week for laughs and a hard week for distinguishing the best from the merely good. In a burst of generosity I award all the prizewinners printed below £10 each, and present the bonus bottle of Chivas Regal 12-year-old de luxe blended whisky

to Philip Dacre. And in a second burst I wish you all, belatedly, a very happy New Year. 1 often wonder about you out there. Why has X's address changed so dramati- cally from a Gloucestershire manor house to 113 Majuba Road, Hull? Why has Y, with the melodious feminine name, not entered a competition for two months? Frustration, vacation, operation or incar- ceration? And is (because I know his favourite film star was Veronica Lake) Veronica Pond the pseudonym of Jeffrey Bernard? Neither of those two sent me a Christmas card, but, astonishingly, some of you did. Thank you.

Who, in which novel, and why: a Practised family planning with an ear- trumpet?

b Found a Christmas candle less comfort than a pair of yuppie braces?

c Read A Christmas Carol aloud in the toilet?

d 'Slipped out and slept on the slopes of Popocatapetl'?

e Reflected, too late, on the kangaroo of time?

Which well-knoWn Swedish meteorologist spent 'a bad quarter of an hour' with an American poet in a Tokyo car-park, and why?

(Basil Ransonie-Davies) In the Arts, whose: a Verse epic, based on Norse legend, brought a writ from Norman Tebbit?

b Third Symphony preceded her Second?

c Controversial self-portrait was given a coat of white emulsion?

d Cello was kidnapped and returned in a pram?

a Pop star proposed to a girl while free- falling?

b Bald celebrity had a face painted oil the back of his head so that people he wanted to avoid shouldn't know whether he was coming or going?

c Politician said: 'I am definitely not an egotist. Speaking for myself, I regard myself simply as me'?

a Spectator interviewee said of President Mitterrand: 'We ought to do a bloody Henry V on him'?

(Chris Tingley) Where in the stratosphere is: The Tchervid Signad; Itching Point; Two- point Charlie; Lag?

What, in philosophical terms, have these three in common: Beds; Hearts; Knots?

(Laurence Fowler) Can you locate a trollop in Trollope, a grave in Graves, a pope in Pope, and a bridge in Bridges, and establish an ornithological link between them, an apothecary in Mantua and a lachry- mose footballer?

(Watson Weeks) D. H. Lawrence once filled in as wicket-keeper for Adelaide University 2nd XI. How many balls did he face before being replaced? Which school of painters is Adolf Hitler usually associated with?

Which leaders of the Western Alliance do not play golf? And what is George Bush's handicap?

(Vladimir Thune) How many: a Geese do there have to be to constitute a gaggle?

b Versts would make 100 parasangs?

c Names are there in the Book of Numbers?

d Seats are there on the upper deck of a standard London bus?

Whose dog sat for the His Master's Voice portrait, and when?

In which novels are characters forced to eat: a 'Fillet of Dalmatian, damnably cooked'?

b The hindquarters of Bunce?

c 'A dozen dollops of minced dog — and be quick about it!'?