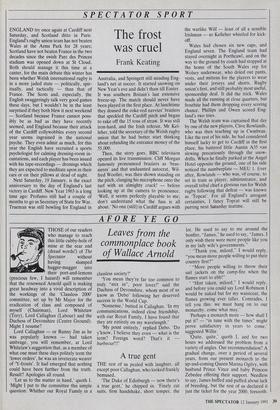 ENGLAND try once again at Cardiff next Saturday, and Scotland ditto in Paris. England's rugby union team has not beaten Wales at the Arms Park for 28 years; Scotland have not beaten France in the two decades since the swish Parc des Princes stadium was opened down at St Cloud. Both should manage it this time at a canter, for the main debate this winter has been whether Welsh international rugby is in a more jaded state — politically, spir- itually, and tactically — than that of France. The Scots and, especially, the English swaggeringly talk very good games these days, but I wouldn't be in the least surprised if they both blew it next weekend — Scotland because France cannot poss- ibly be as bad as they have recently seemed, and England because their attack of the Cardiff collywobbles every second year seems ingrained in the national psyche. They even admit as much, for this year the English have recruited a sports psychologist for calming dressing-room in- cantations, and each player has been issued with his tape-recordings — dronings which they are expected to meditate upon in their cars or on their pillows at dead of night.

Next Saturday, 19 January, is the exact anniversary to the day of England's last victory in Cardiff. New Year 1963 is a long time ago: Profumo still had a couple of months to go as Secretary of State for War, Trueman was still bowling for England in

The frost was cruel

Australia, and Springett still minding Eng- land's net at soccer. It started snowing on New Year's eve and didn't thaw till Easter. It was southern Britain's last extensive freeze-up. The match should never have been played in the first place. At lunchtime they doused the coke-red navvies' braziers that speckled the Cardiff pitch and began to rake off the 15 tons of straw. It was still iron-hard, and the Irish referee, Mr Kel- leher, told the secretary of the Welsh rugby union that he had better start thinking about refunding the entrance money of the 55,000.

Then, the story goes, BBC television opened its live transmission. Cliff Morgan famously pronounced braziers as 'bras- sieres' and that undaunted autocrat, Wil- fred Wooller, was then shown standing on the pitch, clanging his microphone onto the turf with an almighty crack! — before looking up at the camera to pronounce, `Well, it seems perfectly playable to me; don't understand what the fuss is all about.' No one (still) in Cardiff argues with

the warlike Wilf — least of all a sensible Irishman — so Kelleher whistled for kick- off.

Wales had chosen six new caps, and England seven. The England team had stayed overnight in Porthcawl, and on the way to the ground by coach had stopped at the home of the South Wales rep for Wolsey underwear, who doled out pants, vests, and mittens for the players to wear under their jerseys and shorts. Rugby union's first, and still probably most useful, sponsorship deal. It did the trick. Wales made all the running at close quarters, but frostbite had them dropping every scoring chance. Phillips and Owen scored Eng- land's two tries.

The Welsh team was captained that day by one of the new players, Clive Rowlands, who was then teaching up in Cwmbran. Like the rest of his side, he had considered himself lucky to get to Cardiff in the first place, his battered little Austin A35 van slewing precariously through the snow- drifts. When he finally parked at the Angel Hotel opposite the ground, one of his side noticed the numberplate — MEU 1. Ever after, Rowlands — who was, of course, to set in train as player, administrator, and overall tribal chief a glorious run for Welsh rugby following that defeat — was known as `Topcat'. For all England's arrogant certainties, I fancy Topcat will still be purring next Saturday teatime.