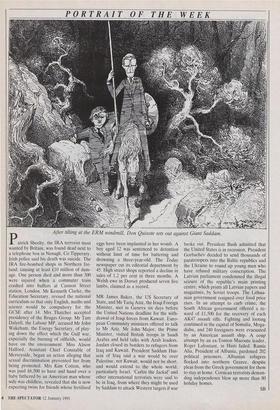 After tilting at the ERM windmill, Don Quixote sets out against Giant Saddam. Patrick Sheehy, the IRA terrorist most wanted by Britain, was found dead next to a telephone box in Nenagh, Co Tipperary. Irish police said his death was suicide. The IRA fire-bombed shops in Northern Ire- land, causing at least £10 million of dam- age. One person died and more than 300 were injured when a commuter train crashed into buffers at Cannon Street station, London. Mr Kenneth Clarke, the Education Secretary, revised the national curriculum so that only English, maths and science would be compulsory for the GCSE after 14. Mrs Thatcher accepted presidency of the Bruges Group. Mr Tam Dalyell, the Labour MP, accused Mr John Wakeham, the Energy Secretary, of play- ing down the effect which the Gulf war, expecially the burning of oilfields, would have on the environment. Miss Alison Halford, Assistant Chief Constable of Merseyside, began an action alleging that sexual discrimination prevented her from being promoted. Mrs Kim Cotton, who was paid £6,500 to have and hand over a baby fathered by an American man whose wife was childless, revealed that she is now expecting twins for friends whose fertilised eggs have been implanted in her womb. A boy aged 12 was sentenced to detention without limit of time for battering and drowning a three-year-old. The Today newspaper cut its editorial department by 45. High street shops reported a decline in sales of 1.2 per cent in three months. A Welsh ewe in Dorset produced seven live lambs, claimed as a record.

MR James Baker, the US Secretary of State, and Mr Tariq Aziz, the Iraqi Foreign Minister, met in Geneva six days before the United Nations deadline for the with- drawal of Iraqi forces from Kuwait. Euro- pean Community ministers offered to talk to Mr Aziz. Mr John Major, the Prime Minister, visited British troops in Saudi Arabia and held talks with Arab leaders. Jordan closed its borders to refugees from Iraq and Kuwait. President Saddam Hus- sein of Iraq said a war would be over Palestine, not Kuwait, would not be short, and would extend to the whole world, particularly Israel. 'Carlos the Jackal' and other international terrorists were said to be in Iraq, from where they might be used by Saddam to attack Western targets if war broke out. President Bush admitted that the United States is in recession. President Gorbachev decided to send thousands of paratroopers into the Baltic republics and the Ukraine to round up young men who have refused military conscription. The Latvian parliament condemned the illegal seizure of the republic's main printing centre, which prints all Latvian papers and magazines, by Soviet troops. The Lithua- nian government resigned over food price rises. In an attempt to curb crime, the South African government offered a re- ward of £1,500 for the recovery of each AK47 assault rifle. Fighting and looting continued in the capital of Somalia, Moga- dishu, and 240 foreigners were evacuated by an American assault ship. A coup attempt by an ex-Tonton Macoute leader, Roger Lafontant, in Haiti failed. Ramiz Alia, President of Albania, pardoned 202 political prisoners. Albanian refugees flocked into northern Greece, despite pleas from the Greek government for them to stay at home. Corsican terrorists deman- ding independence blew up more than SO holiday homes.