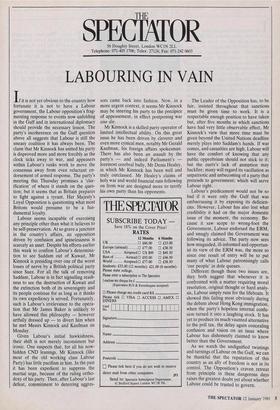 If it is not yet obvious to the country how fortunate it is not to have a Labour government, the Labour opposition's frag- menting response to events now unfolding in the Gulf and in international diplomacy should provide the necessary lesson. The party's incoherence on the Gulf question above all suggests that Labour is still the uneasy coalition it has always been. The claim that Mr Kinnock has united his party is disproved more and more forcibly as the clock ticks away to war, and appeasers within Labour's ranks work to move the consensus away from even reluctant en- dorsement of armed response. The party's meeting this Thursday promises a 'clar- ification' of where it stands on the ques- tion; but it seems that as Britain prepares to fight against a tyrant, Her Majesty's Loyal Opposition is questioning what most Britons would presume to be a fun- damental loyalty.

Labour seems incapable of exercising any principle other than what it believes to be self-preservation. At so grave a juncture in the country's affairs, an opposition driven by confusion and spinelessness is scarcely an asset. Despite his efforts earlier this week to confirm Labour's determina- tion to see Saddam out of Kuwait, Mr Kinnock is presiding over one of the worst losses of nerve by a British political party since Suez. For all the talk of removing Saddam, Labour is in fact signalling readi- ness to see the destruction of Kuwait and the extinction both of its sovereignty and its people continue for as long as it thinks its own expediency is served. Fortunately, such is Labour's irrelevance to the opera- tion that Mr James Baker is unlikely to have allowed this philosophy — however artfully dressed up — to divert him when he met Messrs Kinnock and Kaufman on Monday.

Given Labour's initial hawkishness, their shift is not merely inconsistent but ironic. One suspects that, for all his now- hidden CND leanings, Mr Kinnock (like most of the old working class Labour Party) has little pacifism in him. In the past it has been expedient to suppress the martial urge, because of the ruling ortho- doxy of his party. Then, after Labour's last . defeat, commitment to deterring aggres- sors came back into fashion. Now, in a more urgent context, it seems Mr Kinnock may be steering his party to the precipice of appeasement, in effect postponing war sine die.

Mr Kinnock is a skilled party operator of limited intellectual ability. On this great issue he has been driven by cleverer and even more cynical men, notably Mr Gerald Kaufman, his foreign affairs spokesman. There has also been an assault by the party's — and indeed Parliament's foremost cerebral bully, Mr Denis Healey, in which Mr Kinnock has been well and truly outclassed. Mr Healey's claims of holy war and world financial ruin following on from war are designed more to terrify his own party than his opponents. The Leader of the Opposition has, to be fair, insisted throughout that sanctions must be given time to work. It is a respectable enough position to have taken but, after five months in which sanctions have had very little observable effect, Mr Kinnock's view that more time must be given beyond the United Nations deadline merely plays into Saddam's hands. If war comes, and casualties are high, Labour will have the comfort of knowing that any public opprobrium should not stick to it; but the party's lack of gumption may backfire; many will regard its vacillation as unpatriotic and unbecoming of a party that pretends to government; which will serve Labour right.

Labour's predicament would not be so bad if it were only the Gulf that was embarrassing it by exposing its deficien- cies. However, Labour has also lost what credibility it had on the major domestic issue of the moment, the economy. Be- cause it saw scope to wrong-foot the Government, Labour endorsed the ERM, and smugly claimed the Government was following its advice. The party now sees how misguided, ill-informed and opportun- ist its view of the ERM was, the more so since one result of entry will be to put many of what Labour patronisingly calls our people' in dole queues.

Different though these two issues are, they both suggest that whenever it is confronted with a matter requiring moral resolution, original thought or hard analy- sis, Labour simply runs for the lifeboats. It showed this failing most obviously during the debate about Hong Kong immigration, when the party's hopeless internal confu- sion turned it into a laughing stock. It has yet to produce its much vaunted alternative to the poll tax, the delay again concealing confusion and vision on an issue where Labour has dishonestly claimed to know better than the Government.

As we watch the undignified twistings and turnings of Labour on the Gulf, we can be thankful that the reputation of this country as an ally of freedom is not in its control. The Opposition's craven retreat from principle in these dangerous days raises the greatest doubt yet about whether Labour could be trusted to govern.