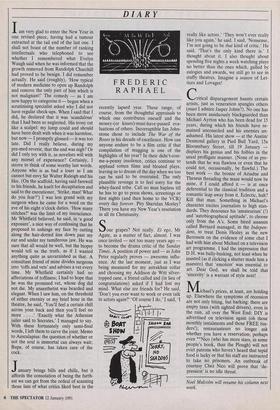 Iam very glad to enter the New Year in one revised piece, having had a tumour extracted at the tail end of the last one. I shall not boast of the number of ranking intellectuals who telephoned to see whether I remembered what Evelyn Waugh said when he was informed that the growth removed from Randolph Churchill had proved to be benign. I did remember actually. He said (roughly), 'How typical of modern medicine to open up Randolph and remove the only part of him which is not malignant!' The comedy — as I am now happy to categorise it — began when a scrutinising specialist asked why I did not have regular check-ups. When I said that I did, he declared that it was `scandalous' that I had been so neglected. His irony cut like a scalpel: my lump could and should have been dealt with when it was harmless, but now — I promptly glossed — it was too late. Did I really believe, during my pre-med reverie, that the end was nigh? Or did I only toy with it, as novelists will with any morsel of experience? Certainly, I strove to think of some worthy last words. Anyone who is as bad a loser as I am cannot but envy Sir Walter Raleigh and his like. (On the scaffold, having said farewell to his friends, he knelt for decapitation and said to the executioner, 'Strike, man! What do you fear?') I was less grand with my surgeon when he came for a word on the eve of his eight o'clock duties. 'How many stitches?' was the limit of my insouciance. Mr Whitfield believed, he said, in `a good exposure', a nice way of confessing that he proposed to unhinge my face by cutting along the hair-dotted line down past my ear and under my tumiferous jaw. He was sure that all would be well, but the biopsy would tell us the truth, as if I wanted anything quite as unvarnished as that. A consultant friend of mine divides surgeons into `toffs and vets' and advises a vet every time. Mr Whitfield certainly had no affectations of toffiness; I had to hope that he was the promised vet, whose dog did not die. My anaesthetist was bearded and elegant. When I saw him, on the threshold of either eternity or my brief hour in the theatre, he said, 'You'll feel a certain chill across your back and then you'll feel no more . . . ."Exactly what the Athenian jailer said to Socrates,' I managed to say. With these fortunately only semi-final words, I left them to carve the joint. Memo to Aesculapius: the question of whether or not the soul is immortal can always wait; Bupa, of course, has taken care of the cock.

January brings bills and chills, but it affords the consolation of being the furth- est we can get from the ordeal of scanning those lists of what critics liked best in the FREDERIC RAPHAEL recently lapsed year. These range, of course, from the thoughtful appraisals to which one contributes oneself and the money-(or kisses)-must-have-passed eva- luations of others. Incorruptible Ian John- stone chose to include The War of the Roses in his decade of excellence. How can anyone endure to be a film critic if that compilation of mugging is one of the highlights of his year? In their didn't-cost- me-a-penny insolence, critics continue to applaud rotten films and bloated plays, leaving us to dream of the day when we too can be said to be overrated. The only plausible revenge is to feel sorry for the whey-faced tribe. Call no man hapless till he has to go to press shows, screenings or first nights (and then home to the VCR) every day forever. Pity Sheridan Morley? There you have my New Year's resolution in all its Christianity.

Sour grapes? Not really. Et ego, Mr Agate, as a matter of fact, almost. I was once invited — not too many years ago to become the drama critic of the Sunday Times. A position of power and — as John Peter regularly proves — awesome influ- ence. At the last moment, just as I was being measured for my astrakhan collar and choosing my Addison de Witt silver- topped cane, a friend called and (in lieu of congratulations) asked if I had lost my mind. What else are friends for? He said, `Don't you ever want to work or even talk to actors again?' Of course I do,' I said, `I really like actors.' They won't ever really like you again,' he said. I said, 'Nonsense, I'm not going to be that kind of critic.' He said, 'That's the only kind there is.' I thought about it. I also thought about spending five nights a week watching plays no better than the ones which, gulled by eulogies and awards, we still go to see in stuffy theatres. Imagine a season of Let- tices and Lovages!

Critical disparagement haunts certain artists, just as veneration spangles others (must I admire Jasper Johns?). No one has been more assiduously blackguarded than Michael Ayrton who has been dead for 15 years, during which his friends have re- mained unconsoled and his enemies un- ashamed. His latest show — at the Austin/ Desmond gallery in Pied Bull Yard, 15a Bloomsbury Street, till 19 January displays his genius and his foibles in the usual profligate manner. (None of us pre- tends that he was flawless or even that he could not, occasionally, be flawful.) The best work — the bronze of Ariadne and Theseus threading the maze would now be mine, if I could afford it — is at once deferential to the classical tradition and a romantic leap away from it. Eclectic, huh? Kill that man. Something in Michael's character excites journalists to high stan- dards. They denounce his 'amateurism' (!) and 'autobiographical aptitude', to choose only from the A's. Some hired assassin called Bernard managed, in the Indepen- dent, to treat Denis Healey as the new Berenson on the evidence of some chat I had with him about Michael on a television art programme. I had the impression that D.H. was bully-busking, not least when he insisted (as if clicking a shutter made him a maestro) that 'emotion' was essential to art. Dear God, we shall be told that `sincerity' is a warrant of style next!

Michael's prices, at least, are holding up. Elsewhere the symptoms of recession are not only biting, but barking: there are empty taxis (with sighted drivers), even in the rain, all over the West End; DIY is advertised on television again (oh those monthly instalments and those FREE bin- ders!); restauranteurs no longer ask whether you have a reservation; perhaps even **Nico (who has more stars, in some people's book, than the Plough) will not evict patrons who haven't heard that tepid food is lucky or that his staff are instructed to take no prisoners. An outbreak of courtesy Chez Nico will prove that `de- pression' is no idle threat.