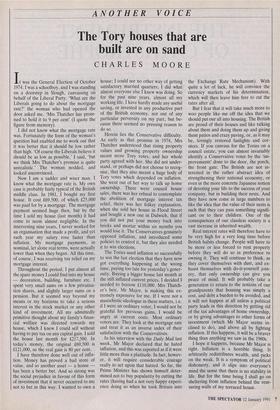 The Tory houses that are built are on sand

It was the General Election of October 1974. I was a schoolboy, and I was standing on a doorstep in Slough, canvassing on behalf of the Liberal Party. 'What are the Liberals going to do about the mortgage rate?' the woman who had opened the door asked me. 'Mrs Thatcher has prom- ised to hold it to 9 per cent' (I quote the figure from memory).

I did not know what the mortgage rate was. Fortunately the form of the woman's question had enabled me to work out that it was better that it should be low rather than high. 'Of course the Liberals believe it should be as low as possible,' I said, 'but we think Mrs Thatcher's promise is quite unrealistic.' The woman nodded, and looked unconvinced.

Now I am a sadder and wiser man. I know what the mortgage rate is. My own case is probably fairly typical of the British middle class. In 1981, I bought my first house. It cost £69,500, of which £25,000 was paid for by a mortgage. The mortgage payment seemed huge then, but by the time I sold my house (last month) it had come to seem almost negligible. In the intervening nine years, I never worked for an organisation that made a profit, and yet each year my salary rose faster than inflation. My mortgage payments, in nominal, let alone real terms, were actually lower than when they began. All this time, of course, I was receiving tax relief on my mortgage interest.

Throughout the period, I put almost all the spare money I could find into my house — decoration, building, furniture etc. I spent very small sums on a few privatisa- tion shares, and slightly larger sums on a pension. But it seemed way beyond my means or my horizons to take a serious interest in the stock market or any other kind of investment. All my admittedly primitive thought about my family's finan- cial welfare was directed towards my house, which I knew I could sell without having to pay tax on any capital gain. I sold the house last month for £217,500. In today's money, the original £69,500 is £121,000, so the real gain is 80 per cent.

I have therefore done well out of infla- tion. Money has proved a bad store of value, and so another asset — a house has been a better bet. And so strong was the social prejudice in favour of this form of investment that it never occurred to me not to bet in this way. I wanted to own a house; I could see no other way of getting satisfactory married quarters; I did what almost everyone else I knew was doing. So for the past nine years, almost all my working life, I have hardly made any useful saving, or invested in any productive part of the British economy, not out of any particular perversity on my part, but be- cause there seemed no pressing reason to do so.

Herein lies the Conservative difficulty. As early as that promise in 1974, Mrs Thatcher understood that rising property values and growing property ownership meant more Tory votes, and her whole party agreed with her. She did not under- stand, or perhaps did not choose to recog- nise, that they also meant a huge body of Tory votes which depended on inflation. She went out of her way to talk up home ownership. There were council house sales, there was her refusal to contemplate the abolition of mortgage interest tax relief, there was her folksy explanation, when she sold her house in Flood Street and bought a new one in Dulwich, that if you did not put your money back into bricks and mortar within six months you would lose it. The Conservatives genuinely opposed inflation, and introduced some policies to control it, but they also needed it to win elections.

The Tories used inflation so successfully to win the last election that they have now got everything happening at the wrong time, paying too late for yesterday's gener- osity. Buying a bigger house last month at the still inflated current prices, I decided I needed to borrow £110,000. Mrs Thatch- er's heir, Mr Major, is making this ex- tremely expensive for me. If I were not a masochistic ideologue in these matters, i.e. if I were an ordinary voter, I would not be grateful for previous gains, I would be angry at current costs. Most ordinary voters are. They look at the mortgage rate and treat it as an inverse index of their satisfaction with the Conservatives.

In his interview with the Daily Mail last week, Mr Major declared that he hated inflation, and this was reported as if it were little more than a platitude. In fact, howev- er, it will require considerable courage really to act upon that hatred. So far, the Prime Minister has shown himself deter- mined not to buy popularity by cutting the rates (having had a not very happy experi- ence doing so when he took Britain into

the Exchange Rate Mechanism). With quite a lot of luck, he will convince the currency markets of his determination, which will then leave him free to cut the rates after all.

But I fear that it will take much more to woo people like me off the idea that we should put our all into housing. The British are proud of their houses and like talking about them and doing them up and giving them patios and crazy paving, or, as it may be, lovingly restored fanlights and cor- nices. If you canvass for the Tories on a council estate, you can almost invariably identify a Conservative voter by the 'im- provements' done to the door, the porch, the front gate. The British are not in- terested in the rather abstract idea of strengthening their national economy, or even in the more concrete Japanese notion of devoting your life to the success of your company, but in building their nests. And they have now come in large numbers to like the idea that the value of their nests is such that they can pass something signifi- cant on to their children. One of the consequences of our classless society is a vast increase in inherited wealth.

Real interest rates will therefore have to be very high for a very long time before British habits change. People will have to be more or less forced to rent property before they will do so in preference to owning it. They will continue to think, as they cover themselves with dust, and ex- haust themselves with do-it-yourself join- ery, that only ownership can give you peace of mind. It will probably take a generation to return to the notions of our grandparents that housing was simply a cost, and debt a burden to be avoided, and it will not happen at all unless a political party leads in this direction by getting rid of the tax advantages of home ownership, or by giving advantages to other forms of investment (which Mr Major seems in- clined to do), and above all by fighting inflation. If this happens, it will be a braver thing than anything we saw in the 1980s.

I hope it happens, because Mr Major is right. Inflation is a horrible thing. It arbitrarily redistributes wealth, and picks on the weak. It is a symptom of political dishonesty, and it slips into everyone's mind the sense that there is no stability in life. But for the time being I shall go on sheltering from inflation behind the reas- suring walls of my terraced house.