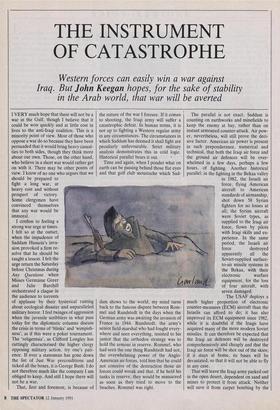 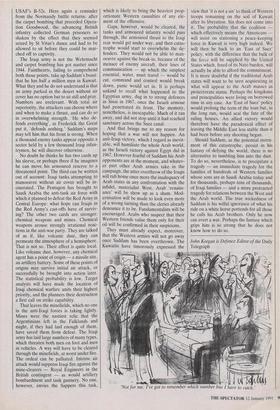 THE INSTRUMENT OF CATASTROPHE

Western forces can easily win a war against Iraq. But John Keegan hopes, for the sake of stability in the Arab world, that war will be averted

I VERY much hope that there will not be a war in the Gulf, though I believe that it could be won quickly and at little cost in lives to the anti-Iraqi coalition. This is a minority point of view. Most of those who oppose a war do so because they have been persuaded that it would bring heavy casual- ties to both sides, though they think more about our own. Those, on the other hand, who believe in a short war would rather get on with it. There may be other points of view. I know of no one who argues that we should be prepared to fight a long war, at heavy cost and without prospect of victory. Some clergymen have convinced themselves that any war would be immoral.

I confess to feeling a strong war urge at times. I felt so at the outset, when the impudence of Saddam Hussein's inva- sion provoked a firm re- solve that he should be taught a lesson. I felt the urge return the Saturday before Christmas during Any Questions when Misses Germaine Greer and Julie Burchill orchestrated a claque in the audience to torrents of applause by their hysterical ranting about ecological disaster and unparalleled military horror. I feel twinges of aggression when the juvenile scribblers in what pass today for the diplomatic columns discuss the crisis in terms of 'blinks' and `wimpish- ness', as if this were a poker tournament. The `religentsia', as Clifford Langley has cuttingly characterised the higher clergy opposing military action, try one's pati- ence. If ever a statesman has gone down the list of Just War preconditions and ticked all the boxes, it is George Bush. I do not therefore much like the company I am obliged to keep. And still I hope there will not be a war.

That, first and foremost, is because of the nature of the war I foresee. If it comes to shooting, the Iraqi army will suffer a catastrophic defeat. In human terms, it is not up to fighting a Western regular army in any circumstances. The circumstances in which Saddam has deemed it shall fight are peculiarly unfavourable. Strict military analysis demonstrates this in cold logic. Historical parallel bears it out.

Time and again, when I ponder what on earth can be passing behind those flat eyes and that golf club moustache which Sad- dam shows to the world, my mind turns back to the famous dispute between Rom- mel and Rundstedt in the days when the German army was awaiting the invasion of France in 1944. Rundstedt, the army's senior field-marshal who had fought every- where and seen everything, insisted to his junior that the orthodox strategy was to hold the armour in reserve. Rommel, who had seen the one thing Rundstedt had not, the overwhelming power of the Anglo- American air forces, told him that he could not conceive of the destruction those air forces could wreak and that, if he held his tanks in reserve, they would be massacred as soon as they tried to move to the beaches. Rommel was right. force destroyed apparently all the Soviet-supplied surface- to-air missile systems in the Bekaa, with their electronic warfare equipment, for the loss of four aircraft, with seven damaged.

The USAF deploys a much higher proportion of electronic counter-measures (ECM) aircraft than the Israelis can afford to do; it has also improved its ECM equipment since 1982, while it is doubtful if the Iraqis have acquired many of the more modern Soviet missiles. It can therefore be expected that the Iraqi air defences will be destroyed comprehensively and cheaply and that the Iraqi air force will be shot out of the skies; if it stays at home, its bases will be devastated, so that it will not be able to fly in any case.

That will leave the Iraqi army parked out in the open desert, dependent on sand and mines to protect it from attack. Neither will save it from carpet bombing by the USAF's B-52s. Here again a reminder from the Normandy battle returns: after the carpet bombing that preceded Opera- tion Goodwood, the advancing British infantry collected German prisoners so shaken by the effect that they seemed seized by St Vitus's dance and had to be allowed to sit before they could be mar- ched off to captivity.

The Iraqi army is not the Wehrmacht and carpet bombing has got nastier since 1944. Fainthearts, failing to comprehend both those points, take up Saddam's boast: that he has half a million men in Kuwait. What they and he do not understand is that an army parked in the desert without air cover has no option but to sit still and pray. Numbers are irrelevant. With total air superiority, the attackers can choose where and when to make a thrust, and can do so in overwhelming strength. 'He who de- fends everything', as Frederick the Great put it, 'defends nothing.' Saddam's maps may tell him that his front is strong. When a thousand enemy tanks appear opposite a sector held by a few thousand Iraqi infan- trymen, he will discover otherwise.

No doubt he thinks he has two cards up his sleeve, or perhaps three if he imagines he can move his armoured reserve to a threatened point. The third can be written out of account: Iraqi tanks attempting to manoeuvre without air cover will be in- cinerated. The Pentagon has brought to Saudi Arabia the anti-tank air force with which it planned to defeat the Red Army in Central Europe: what hope can Iraqis in the Red Army's cast-offs have of surviv- ing? The other two cards are stronger: chemical weapons and mines. Chemical weapons arouse strongly irrational reac- tions in the anti-war party. They are talked of as if, like volcanic dust, they can permeate the atmosphere of a hemisphere. That is not so. Their effect is quite local. Like volcanic dust, however, any chemical agent has a point of origin — a missile site, an artillery battery. Some of these points of origins may survive initial air attack, or successfully be brought into action later. The statistical probability is low. Target analysts will have made the location of Iraqi chemical warfare units their highest priority, and the planners their destruction a first call on strike capability.

That leaves the minefields, which no one in the anti-Iraqi forces is taking lightly. Mines were the nastiest relic that the Argentinians left in the Falklands and might, if they had laid enough of them, have saved them from defeat. The Iraqi army has laid large numbers of many types, which threaten both men on foot and men in vehicles. A way will have to be cleared through the minefields, at worst under fire. The ordeal can be palliated. Intense air attack would suppress Iraqi fire against the mine-clearers — Royal Engineers in the British contingent — as would artillery bombardment and tank gunnery. No one, however, envies the Sappers this task, which is likely to bring the heaviest prop- ortionate Western casualties of any ele- ment of the offensive.

Gaps, however, would be cleared, the tanks and armoured infantry would pass through, the armoured thrust to the Iraqi rear would get under way, and then catas- trophe would start to overwhelm the de- fenders. They would not be able to man- oeuvre against the break-in, because of the menace of enemy aircraft, their lines of communication — up which the simplest essential, water, must travel — would be cut, command and control would break down, panic would set in. It is perhaps unkind to recall what happened to the Egyptian army, dug in to strong defences in Sinai in 1967, once the Israeli armour had penetrated its front. The memory, nonetheless, is inescapable. Much of it ran away, and did not stop until it had reached sanctuary across the Suez canal.

And that brings me to my reason for hoping that a war will not happen. An anti-Iraqi victory, which I regard as inevit- able, will humiliate the whole Arab world, as the Israeli victory against Egypt did in 1967. However fearful of Saddam his Arab opponents are at the moment, and whatev- er part other Arab armies take in the campaign, the utter overthrow of the Iraqis will rub home once more the inadequacy of Arab states in any confrontation with the infidel, materialist West. Arab 'renaiss- ance' will be show up as a sham. Mod- ernisation will be made to look even more of a wrong turning than the clerics already denounce it to be. Fundamentalists will be encouraged. Arabs who suspect that their Western friends value them only for their oil will be confirmed in their suspicions. They must already expect, moreover, that the Western armies will not go away once Saddam has been overthrown. The Kuwaitis have timorously expressed the view that 'it is not a sin' to think of Western troops remaining on the soil of Kuwait after its liberation. Sin does not come into it. The probability that the coalition which effectively means the Americans will insist on stationing a peace-keeping force in Kuwait is very high indeed. We will then be back to an 'East of Suez' policy, with the difference that the bulk of the force will be supplied by the United States which, freed of its Nato burden, will actually be able to afford the commitment. It is more doubtful if the traditional Arab states will want to be seen acquiescing in what will appear to the Arab masses as protectorate status. Perhaps the kingdoms and principalities were living on borrowed time in any case. An 'East of Suez' policy would prolong the term of the loan but, in the long run, would seal the fate of the ruling houses. An allied victory would therefore have the paradoxical effect of leaving the Middle East less stable than it had been before any shooting began.

Should Saddam, as the potential instru- ment of this catastrophe, persist in his fantasy of defying the world, there is no alternative to tumbling him into the dust. To do so, nevertheless, is to precipitate a tragedy — an immediate tragedy for the families of hundreds of Western families whose sons are in Saudi Arabia today and for thousands, perhaps tens of thousands, of Iraqi families — and a more protracted tragedy for relations between the West and the Arab world. The true wickedness of Saddam is his wilful ignorance of what his ride on a white horse portends for all those he calls his Arab brothers. Only he now can avert a war. Perhaps the fantasy which grips him is so strong that he does not know how to do so.

John Keegan is Defence Editor of the Daily Telegraph `Not for me. I've got to remember which number bus I have to catch.'