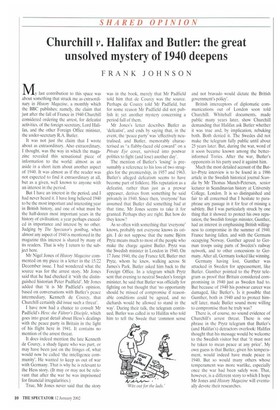 My last contribution to this space was about something that struck me as extraordinary in History Magazine. a monthly which the BBC publishes; namely, the claim that just after the fall of France in 1940 Churchill considered ordering the arrest, for defeatist activities, of the foreign secretary, Lord Halifax, and the other Foreign Office minister, the under-secretary R.A. Butler.

It was not just the claim that I wrote about as extraordinary. Also extraordinary, I thought, was the way in which the magazine revealed this sensational piece of information to the world: almost as an aside in a short item about another aspect of 1940. It was almost as if the reader was not expected to find it extraordinary at all, but as a given, well known to anyone with an interest in the period.

But I have an interest in the period, and I had never heard it. I have long believed 1940 to be the most important and interesting year in British history, and one of what must be the half-dozen most important years in the history of civilisation; a year perhaps exceeded in importance and interest by no other. Judging by The Spectator's postbag, when almost any aspect of 1940 is mentioned in the magazine this interest is shared by many of its readers. That is why I return to the subject here.

Mr Nigel Jones of History Magazine commented on my piece in a letter in the 15/22 December issue. I had wondered what the source was for the arrest story. Mr Jones said that he had checked it 'with the distinguished historian Peter Padfield', Mr Jones added that 'it is Mr Padfield's opinion. based on conversations with Butler's peace intermediary, Kenneth de Courcy, that Churchill certainly did issue such a threat'.

I have now had a chance to consult Mr Padfield's Hess: the Fahrer's Disciple, which goes into great detail about Hess's dealings with the peace party in Britain in the light of his flight here in 1941. It contains no mention of the arrest threat.

It does indeed mention the late Kenneth de Courcy, a shady figure who was part, or may have been just on the fringes of, what would now be called 'the intelligence community'. He wanted to keep us out of war with Germany. That is why he is relevant to the Hess story. (It may or may not be relevant that after the war he was imprisoned for financial irregularities.) True, Mr Jones never said that the story was in the book, merely that Mr Padfield told him that de Courcy was the source. Perhaps de Courcy told Mr Padfield. but for some reason Mr Padfield did not publish it; yet another mystery concerning a period full of them.

Mr Jones's letter describes Butler as 'defeatist', and ends by saying that, in the event, the 'peace party' was 'effectively neutralised, and Butler, memorably characterised as "a flabby-faced old coward" on a Private Eye cover, survived into postwar politics to fight (and lose) another day'.

The mention of Butler's 'losing' is presumably a reference to his loss of two struggles for the premiership, in 1957 and 1963. Butler's alleged defeatism seems to have become part of folklore. His reputation as a defeatist, rather than just as a prewar appeaser, derives from something he said privately in 1940. Since then, 'everyone' has assumed that Butler did something bad at that time. Mr Jones seems to take it for granted. Perhaps they are right. But how do they know?

As so often with something that 'everyone' knows, probably not everyone knows its origin. I do not suppose that the name Bjorn Prytz means much to most of the people who make the charge against Butler. Prytz was the Swedish minister in London in 1940. On 17 June 1940, the day France fell, Butler met Prytz, whom he knew, walking across St James's Park. Butler asked him back to the Foreign Office. In a telegram which Prytz sent that evening to neutral Sweden's foreign minister, he said that Butler was officially for fighting on but thought that 'no opportunity should be missed of compromise if reasonable conditions could be agreed, and no diehards would be allowed to stand in the way'. During their talk, the telegram continued, Butler was called in to Halifax who told him to tell the Swede that 'common sense and not bravado would dictate the British government's policy'.

British interceptors of diplomatic communications out of London soon told Churchill. Whitehall documents, made public many years later, show Churchill demanding that Halifax ask Butler whether it was true and, by implication, rebuking both. Both denied it. The Swedes did not make the telegram fully public until about 25 years later. But, during the war, word of it soon became known among the betterinformed Tories. After the war, Butler's opponents in his party used it against him.

Much the most detailed account of the Butler—Prytz interview is to be found in a 1986 article in the Swedish historical journal Scandia by Mr Thomas Munch-Petersen, senior lecturer in Scandinavian history at University College, London. It is so distinguished and fair to all concerned that I hesitate to paraphrase any passage in it for fear of missing a subtlety. But I was particularly struck by one thing that it showed: to protect his own reputation, the Swedish foreign minister, Gunther, had an interest in emphasising British willingness to compromise in the summer of 1940. France having fallen, and with the Germans occupying Norway, Gunther agreed to German troops using parts of Sweden's railway network, and to other concessions to Germany. After all, Germany looked like winning.

Germany having lost, Gunther was attacked in Sweden for appeasement, like Butler. Gunther pointed to the Prytz telegram as proof that Britain considered compromising in 1940 just as Sweden had to. But because of 1940 his postwar career was damaged, like Butler's. Is it possible that Gunther, both in 1940 and to protect himself later, made Butler sound more willing to compromise than he truly was?

There is, of course, no sound evidence of Churchill's arrest threat. There is one phrase in the Prytz telegram that Butler's (and Halifax's) detractors overlook: Halifax thought that his message would be welcome to the Swedish visitor but that 'it must not be taken to mean peace at any price'. My own guess is that Butler, given his temperament, would indeed have made peace in 1940. But so would many others whose temperament was more warlike, especially once the war had been safely won. That, however, is a different story to which I hope Mr Jones and History Magazine will eventually devote their researches.