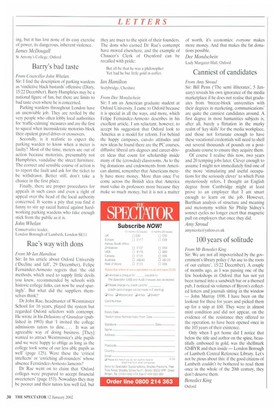 From Mr Ian Hamilton Sir: In his article about Oxford University (Decline and fall', 29 December), Felipe Fernandez-Armesto regrets that 'the old methods, which used to supply little devils you knew, recommended by schools with historic college links, can now be used sparingly'. But what did the suppliers themselves think?

Dr John Rae, headmaster of Westminster School for 16 years, played the system but regarded Oxford selectors with contempt. He wrote in his Delusions of Grandeur (published in 1993) that 'I invited the college

admissions tutors to dine. . It was an agreeable way of doing business. [They] wanted to attract Westminster's able pupils and we were happy to oblige as long as the college took some of our less able pupils as well' (page 125). Were these the 'critical intellects' or 'enriching all-rounders' whose absence Fernandez-Armesto laments?

Dr Rae went on to claim that 'Oxford colleges were prepared to accept financial sweeteners' (page 153). Nowadays they may be poorer and their tutors less well fed, but they are truer to the spirit of their founders. The dons who earned Dr Rae's contempt have moved elsewhere, and the example of Chaucer's Clerk of Oxenford can be recalled with pride:

But all he that he was a philosopher Yet had he hut little gold in coffer.

Sir: I am an American graduate student at Oxford University. I came to Oxford because it is special in all the ways, and more, which Felipe Fernandez-Armesto describes in his excellent article. I am reluctant, however, to accept his suggestion that Oxford look to America as a model for reform. For behind the happy campuses, can-do attitudes and new ideas he found there are the PC courses, diffusive liberal arts degrees and career-driven ideas that count for scholarship inside many of the (crowded) classrooms. As to the big donations and endowments from American alumni, remember that Americans merely have more money. More than once I've come across the British idea that America must value its professors more because they make so much money, but it is not a matter

of worth, it's economics: everyone makes more money. And that makes the fat donations possible.