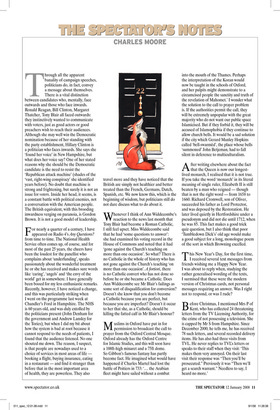 T hrough all the apparent banality of campaign speeches, politicians do,

in fact, convey a message about themselves. There is a vital distinction between candidates who, mentally, face outwards and those who face inwards. Ronald Reagan, Bill Clinton, Margaret Thatcher, Tony Blair all faced outwards: they instinctively wanted to communicate with voters, just as good actors or good preachers wish to reach their audiences. Although she may well win the Democratic nomination because of her standing with the party establishment, Hillary Clinton is a politician who faces inwards. She says she ‘found her voice’ in New Hampshire, but what does her voice say? One of her stated reasons why she should be the Democratic candidate is the need to resist the ‘Republican attack machine’ (shades of the ‘vast, right-wing conspiracy’ she identified years before). No doubt that machine is strong and frightening, but surely it is not an issue for voters. Inside her head, it seems, is a constant battle with political enemies, not a conversation with the American people. The British equivalent, with this brooding inwardness verging on paranoia, is Gordon Brown. It is not a good model of leadership.

For nearly a quarter of a century, I have appeared on Radio 4’s Any Questions? from time to time. The National Health Service often comes up, of course, and for most of the past 25 years, the cheers have been the loudest for the panellist who complains about ‘underfunding’, speaks passionately about the wonderful treatment he or she has received and makes sure words like ‘caring’, ‘angels’ and ‘the envy of the world’ get in somewhere. I have generally been booed for my less enthusiastic remarks. Recently, however, I have noticed a change, and this was particularly striking when I went on the programme last week at Chandler’s Ford in Hampshire. The NHS is 60 years old, and was duly extolled by the politicians present (John Denham for the government and Andrew Lansley for the Tories); but when I did my bit about how the system is bad at root because it cannot respond to the needs of patients, I found that the audience listened. No one shouted me down. The reason, I suspect, is that people are nowadays used to a choice of services in most areas of life — booking a flight, buying insurance, eating in a restaurant — and find it stranger than before that in the most important area of health, they are powerless. They also travel more and they have noticed that the British are simply not healthier and better treated than the French, Germans, Dutch, Spanish, etc. We now know this, which is the beginning of wisdom, but politicians still do not dare discuss what to do about it.

Whenever I think of Ann Widdecombe’sreaction to the news last month that Tony Blair had become a Roman Catholic, I still feel upset. Miss Widdecombe said that he had ‘some questions to answer’: she had examined his voting record in the House of Commons and noted that it had ‘gone against the Church’s teaching on more than one occasion’. So what? There is no Catholic in the whole of history who has not gone against the Church’s teaching ‘on more than one occasion’. A fortiori, there is no Catholic convert who has not done so before he or she became a Catholic. Does Ann Widdecombe see Mr Blair’s failings as some sort of disqualification for conversion? Doesn’t she know that you don’t become a Catholic because you are perfect, but because you are imperfect? Doesn’t it occur to her that she, as a Catholic, should be killing the fatted calf in Mr Blair’s honour?

Muslims in Oxford have put in for permission to broadcast the call to prayer from the Oxford Central Mosque. Oxford already has the Oxford Centre for Islamic Studies, and this will soon have a 108ft-high minaret and a 75ft dome. So Gibbon’s famous fantasy has partly become fact. He imagined what would have happened if Charles Martel had lost the battle of Poitiers in 733: ‘... the Arabian fleet might have sailed without a combat into the mouth of the Thames. Perhaps the interpretation of the Koran would now be taught in the schools of Oxford, and her pulpits might demonstrate to a circumcised people the sanctity and truth of the revelation of Mahomet.’ I wonder what the solution to the call to prayer problem is. If the authorities permit the call, they will be extremely unpopular with the great majority who do not want our public space Islamicised. But if they forbid it, they will be accused of Islamophobia if they continue to allow church bells. It would be a sad solution if the city which Gerard Manley Hopkins called ‘bell-swarmèd’, the place whose bells ‘summoned’ John Betjeman, had to fall silent in deference to multiculturalism.

After writing elsewhere about the fact that the Queen is now our longestlived monarch, I realised that it is not true. If you take the word ‘monarch’ in its literal meaning of single ruler, Elizabeth II is still beaten by a man who reigned — though that is not the right word — from 1658 to 1660. Richard Cromwell, son of Oliver, succeeded his father as Lord Protector, and was deposed by the Restoration. He later lived quietly in Hertfordshire under a pseudonym and did not die until 1712, when he was 85. This fact makes a good trick quiz question, but I also think that poor ‘Tumbledown Dick’s’ old age would make a good subject for a long, monologue poem of the sort in which Browning excelled.

This New Year’s Day, for the first time, I received several text messages from friends wishing me a Happy New Year. I was about to reply when, studying the rather generalised wording of the texts, I surmised that these were the modern version of Christmas cards, not personal messages requiring an answer. Was I right not to respond, or was I rude?

Before Christmas, I mentioned Mrs P of Kent, who has collected 24 threatening letters from the TV Licensing Authority, for the crime of not possessing a television. She is capped by Mr S from Hampshire. Since December 2000, he tells me, he has received 78 such letters, and several recorded delivery items. He has also had three visits from TVL. He never replies to TVL’s letters or speaks to their staff when they visit: ‘This makes them very annoyed. On their last visit their response was “Then you’ll be prosecuted.” Previously it was “Then we’ll get a search warrant.” Needless to say, I heard no more.’