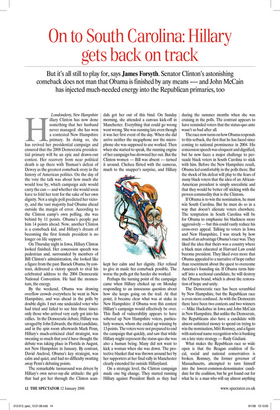 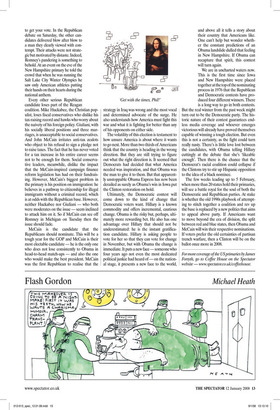 On to South Carolina: Hillary gets back on track

But it’s all still to play for, says James Forsyth. Senator Clinton’s astonishing comeback does not man that Obama is finished by any means -— and John McCain has injected much-needed energy into the Republican primaries, too Londonderry, New Hampshire Hillary Clinton has now done something that her husband never managed: she has won a contested New Hampshire primary. In doing so, she has revived her presidential campaign and ensured that the 2008 Democratic presidential primary will be an epic and drawn-out contest. Her recovery from near political death is up there with Truman’s defeat of Dewey as the greatest comeback story in the history of American politics. On the day of the vote the talk was about how much she would lose by, which campaign aide would carry the can — and whether she would soon have to fold her tent for the sake of her own dignity. Not a single poll predicted her victory, and the vast majority had Obama ahead outside the margin of error. According to the Clinton camp’s own polling, she was behind by 11 points. Obama’s people put him 14 points ahead. Now, another Clinton is a comeback kid, and Hillary’s dream of becoming the first female president is no longer on life support.

On Thursday night in Iowa, Hillary Clinton looked finished. Her concession speech was pedestrian and, surrounded by members of Bill Clinton’s administration, she looked like a figure from the past. Barack Obama, by contrast, delivered a victory speech to rival his celebrated address to the 2004 Democratic National Convention. He had the momentum, the energy.

By the weekend, Obama was drawing overflow crowds everywhere he went in New Hampshire, and was ahead in the polls by double digits. I met one undecided voter who had tried and failed to see him three times: only those who arrived very early got into his rallies. In the Democratic debate, Hillary was savaged by John Edwards, the third candidate, and in the spin room afterwards Mark Penn, Hillary’s much-criticised chief strategist, was sweating so much that you’d have thought the debate was taking place in Florida in August, not New Hampshire in January. By contrast, David Axelrod, Obama’s key strategist, was calm and quiet, and had no difficulty swatting away Penn’s debating points.

The remarkable turnaround was driven by Hillary’s own never-say-die attitude: the grit that had got her through the Clinton scan dals got her out of this bind. On Sunday morning, she attended a canvass kick-off in Manchester. Everything that could go wrong went wrong. She was running late even though it was her first event of the day. When she did arrive neither the megaphone nor the microphone she was supposed to use worked. Then when she started to speak, the running engine of her campaign bus drowned her out. But the Clinton women — Bill was absent — turned it around. Chelsea flirted with the cameras, much to the snapper’s surprise, and Hillary kept her calm and her dignity. Her refusal to give in made her comeback possible. The worse the polls got the harder she worked.

Perhaps the turning point of the campaign came when Hillary choked up on Monday responding to an innocuous question about how she keeps going on the trail. At that point, it became clear what was at stake in New Hampshire: if Obama won this contest Hillary’s campaign would effectively be over. This flash of vulnerability appears to have sobered up New Hampshire voters, particularly women, whom she ended up winning by 13 points. The voters were not prepared to end the campaign that quickly, and saw that while Hillary might represent the status quo she was also a human being. Many did not want to kick a woman when she was down. The protective blanket that was thrown around her by her supporters at her final rally in Manchester clearly extended far outside Hillaryland.

On a strategic level, the Clinton campaign made one big change. They started running Hillary against President Bush as they had during the summer months when she was cruising in the polls. The contrast appears to have reminded voters that the status-quo ante wasn’t so bad after all.

The race now turns on how Obama responds to this setback, the first that he has faced since coming to national prominence in 2004. His concession speech was eloquent and dignified, but he now faces a major challenge to persuade black voters in South Carolina to stick with him. Before the New Hampshire result, Obama led comfortably in the polls there. But the shock of his defeat will play to the fears of many black voters that the idea of an AfricanAmerican president is simply unrealistic and that they would be better off sticking with the proven commodity that is the Clintons.

If Obama is to win the nomination, he must win South Carolina. But he must do so in a way that doesn’t alienate voters elsewhere. The temptation in South Carolina will be for Obama to emphasise his blackness more aggressively — but this could vastly reduce his cross-over appeal. Talking to voters in Iowa and New Hampshire, I was struck by how much of an advantage Obama’s race was. They liked the idea that theirs was a country where a black man educated at Harvard Law could become president. They liked even more that Obama appealed to a narrative of hope rather than resentment about the quest to overcome America’s founding sin. If Obama turns himself into a sectional candidate, he will destroy the Obama brand, which is about the restoration of hope and unity.

The Democratic race has been scrambled by New Hampshire, but the Republican race is even more confused. As with the Democrats there have been two contests and two winners — Mike Huckabee in Iowa and John McCain in New Hampshire. But unlike the Democrats, the Republicans also have a candidate with almost unlimited money to spend on trying to win the nomination, Mitt Romney, and a figure with national name recognition who is banking on a late state strategy — Rudy Giuliani.

What makes the Republican race so wide open is that the Reagan coalition of fiscal, social and national conservatives is broken. Romney, the former governor of Massachusetts, attempted to turn himself into the lowest-common-denominator candidate for the coalition, but he got found out for what he is: a man who will say almost anything to get your vote. In the Republican debate on Saturday, the other can didates delivered blow after blow to a man they clearly viewed with contempt. Their attacks were not strate gic but motivated by distaste. Indeed, Romney’s pandering is something to behold. At an event on the eve of the New Hampshire primary he told the crowd that when he was running the Salt Lake City Winter Olympics he saw only American athletes putting their hands on their hearts during the national anthem.

Every other serious Republican candidate loses part of the Reagan coalition. Mike Huckabee, the Christian populist, loses fiscal conservatives who dislike his tax-raising record and hawks who worry about the naivety of his foreign policy. Giuliani, with his socially liberal positions and three marriages, is unacceptable to social conservatives. And John McCain irritates anti-tax zealots who object to his refusal to sign a pledge not to raise taxes. The fact that he has never voted for a tax increase in his entire career seems not to be enough for them. Social conservative leaders, meanwhile, dislike the impact that the McCain-inspired campaign finance reform legislation has had on their fundraising. However, McCain’s biggest problem in the primary is his position on immigration: he believes in a pathway to citizenship for illegal immigrants without a criminal record, which is at odds with the Republican base. However, neither Huckabee nor Giuliani — who both were moderates on the issue — seem inclined to attack him on it. So if McCain can see off Romney in Michigan on Tuesday then the issue should fade.

McCain is the candidate that the Republicans should nominate. This will be a tough year for the GOP and McCain is their most electable candidate — he is the only one who does not lose consistently to Obama in head-to-head match-ups — and also the one who would make the best president. McCain was the first Republican to realise that the strategy in Iraq was wrong and the most vocal and determined advocate of the surge. He also understands how America must fight this war and what it is fighting for better than any of his opponents on either side.

The volatility of this election is testament to how unsure America is about where it wants to go next. More than two thirds of Americans think that the country is heading in the wrong direction. But they are still trying to figure out what the right direction is. It seemed that Democrats had decided that what America needed was inspiration, and that Obama was the man to give it to them. But that apparently unstoppable Obama Express has now been derailed as surely as Obama’s win in Iowa put the Clinton restoration on hold.

Ultimately, the Democratic contest will come down to the kind of change that Democratic voters want. Hillary is a known commodity and offers incremental, cautious change. Obama is the risky but, perhaps, ultimately more rewarding bet. He also has one advantage over Hillary that should not be underestimated: he is the instant gratification candidate. Hillary is asking people to vote for her so that they can vote for change in November, but with Obama the change is immediate. It puts a new face — someone who four years ago not even the most dedicated political junkie had heard of — on the national stage, it presents a new face to the world, and above all it tells a story about their country that Americans like. One can’t help but wonder whether the constant predictions of an Obama landslide dulled that feeling in New Hampshire. If Obama can recapture that spirit, this contest will turn again.

We are in uncharted waters now.

This is the first time since Iowa and New Hampshire were placed together at the top of the nominating process in 1976 that the Republican and Democratic contests have produced four different winners. There is a long way to go in both contests.

But the real winner from the past week might turn out to be the Democratic party. The historic nature of their contest guarantees endless media coverage and whoever emerges victorious will already have proved themselves capable of winning a tough election. But even this is not a certainty, as the fight could turn really nasty. There’s is little love lost between the candidates, with Obama telling Hillary cuttingly at the debate that she’s ‘likeable enough’. Then there is the chance that the Democrat’s racial coalition could collapse if the Clintons try to stir up Hispanic opposition to the idea of a black nominee.

The few weeks leading up to 5 February, when more than 20 states hold their primaries, will see a battle royal for the soul of both the Democratic and Republican parties. At stake is whether the old 1990s playbook of attempting to stitch together a coalition and rev up the base is replaced by a new politics that aims to appeal above party. If Americans want to move beyond the era of division, the split between red and blue states, then Obama and McCain will win their respective nominations. If voters prefer the old certainties of partisan trench warfare, then a Clinton will be on the ballot once more in 2008.