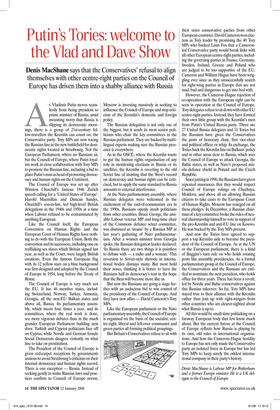 Putin’s Tories: welcome to the Vlad and Dave Show

Denis MacShane says that the Conservatives’ refusal to align themselves with other centre-right parties on the Council of Europe has driven them into a shabby alliance with Russia As Vladimir Putin moves seamlessly from being president to prime minister of Russia, amid mounting worry that Russia is slipping its democratic moorings, there is a group of 21st-century fellow-travellers the Kremlin can count on: the Conservative party. Tory MPs are now toeing the Russian line in the new battlefield for democratic rights located in Strasbourg. Not the European Parliament, where no Russians sit, but the Council of Europe, where Putin loyalists work in close collaboration with Tory MPs to promote the Russian line, including a bid to place Putin’s man as head of promoting democracy and human rights on the Continent.

The Council of Europe was set up after Winston Churchill’s famous 1946 Zurich speech calling for a ‘United States of Europe’. Harold Macmillan and Duncan Sandys, Churchill’s son-in-law, led high-level British delegations in the 1940s and 1950s at a time when Labour refused to be contaminated by anything European.

Like the Council itself, the European Convention on Human Rights and the European Court of Human Rights have nothing to do with the European Union. Both the convention and its successors, including one on trafficking sex slaves which Britain signed last year, as well as the Court, were largely British creations. Even the famous European flag with its 12 yellow stars on a blue background was first designed and adopted by the Council of Europe in 1954, long before the Treaty of Rome.

The Council of Europe is very much not the EU. It has 46 member states, including Switzerland, Norway, Turkey, Armenia, Georgia, all the non-EU Balkan states and above all, Russia. Its parliamentary assembly, which meets four times a year, and its committees, where the real work is done, see more vigorous debates than in the much grander European Parliament building next door. Turkish and Cypriot politicians face off on Cyprus, while Nordic and German female Social Democrats disagree violently on what line to take on prostitution.

The Russian delegation is not only one of the biggest, but it sends its most senior politicians who chair the key committees in the Russian parliament. They are backed by multilingual experts making sure the Russian presence is everywhere.

As in the OSCE, where the Kremlin wants to gut the human rights organisation of any role in monitoring elections in Russia or its satellites, the Kremlin is reverting to the old Soviet line of insisting that the West’s record on democracy and human rights can be criticised, but to apply the same standard to Russia amounts to external interference.

At the Nato parliamentary assembly, where Russian delegates were welcomed in the excitement of the end-of-communism era in the 1990s, Russians openly insult politicians from other countries. Bruce George, the amiable Labour veteran MP and long-time chair of the Commons defence select committee, was dismissed as ‘insane’ by a Russian MP at last year’s gathering of Nato parliamentarians. After a women minister from Georgia spoke, the Russian delegation leader declared: ‘In Russia there are two things it is pointless to debate with — a radio and a woman.’ This reversion to Soviet-style rhetoric in international bodies dismays many. But most hold their noses, thinking it is better to have the Russians half-in democracy’s tent in the hope that the Bear will become more like us.

But now the Russians are going a stage further with an audacious bid to win control of the presidency of the Council of Europe. And they have new allies — David Cameron’s Tory MPs.

Like the European parliament or the Nato parliamentary assembly, the Council of Europe is organised on the basis of the socialist, centre-right, liberal and left-over communist and green parties all forming political groupings.

But Britain’s Conservatives refuse to sit with their sister conservative parties from other European countries. David Cameron won election as Tory leader by promising the 40 Tory MPs who backed Liam Fox that a Cameronled Conservative party would break links with all other European centre-right parties, including the governing parties in France, Germany, Sweden, Ireland, Greece and Poland who are judged to be too supportive of the EU. Cameron and William Hague have been wriggling ever since as they unsuccessfully search for right-wing parties in Europe that are not mad, bad and dangerous to get into bed with.

However, the Cameron–Hague rejection of co-operation with the European right can be seen in operation at the Council of Europe. Tory delegates refuse to sit down with other EU centre-right parties. Instead, they have formed their own little group with the Kremlin’s men from Putin’s United Russia party. There are 27 United Russia delegates and 11 Tories but the Russians have given the Conservatives the posts of honorary chair, first vice-chair and political officer or whip. In exchange, the Tories back the Kremlin line on Balkans’ policy and in other areas dear to Russia, which uses the Council of Europe to attack Georgia, the Baltic states, as well as Nato’s proposed missile-defence shield in Poland and the Czech Republic.

Since joining in 1996, the Russians have given repeated assurances that they would respect Council of Europe rulings on Chechnya, Moldova, and above all on allowing Russian citizens to take cases to the European Court of Human Rights. Moscow has reneged on all these pledges. In December, a Russian chairman of a key committee broke the rules of neutral chairmanship himself to vote in support of the pro-Kremlin and anti-EU line on Kosovo. He was backed by the Tory MPs present.

And now the Tories have agreed to support a top Kremlin aide to become the president of the Council of Europe. As at the UN or the European parliament, there is a kind of Buggins’s turn rule on who holds rotating posts like assembly presidencies. As a formal parliamentary group at the Council of Europe, the Conservatives and the Russians are entitled to nominate the next president, who holds office for three years. There has been a revolt, led by Nordic and Baltic conservatives against this Russian takeover. So far, Tory MPs have stayed true to their alliance with the Kremlin rather than join up with right-wingers from other countries who are clearer-sighted about what Russia is up to.

All this would be small-time politicking on a faraway European body that few know much about. But the current furore at the Council of Europe reflects how Russia is playing by its own, old rules in international organisations. And how the Cameron–Hague hostility to Europe has not only made the Conservative party an isolated force in Europe but has led Tory MPs to keep surely the oddest international company in their party’s history.