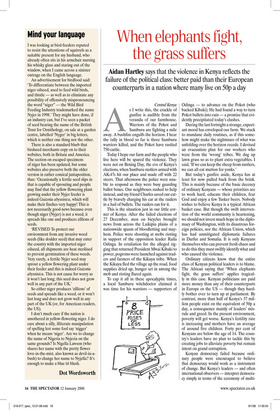 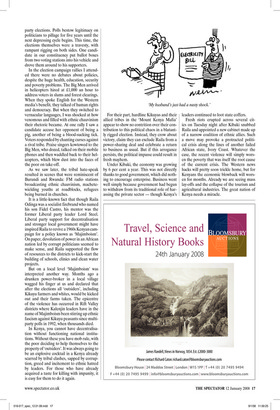 When elephants fight, the grass suffers

Aidan Hartley says that the violence in Kenya reflects the failure of the political class: better paid than their European counterparts in a nation where many live on 50p a day Central Kenya As I write this, the crackle of gunfire is audible from the veranda of our farmhouse. Warriors of the Pokot and Samburu are fighting a mile away. A bushfire engulfs the horizon. I hear the tally in blood so far is three Samburu warriors killed, and the Pokot have rustled 750 cattle.

Today I hope our farm and the people who live here will be spared the violence. They were not on Boxing Day, the eve of Kenya’s elections, when Samburu rustlers armed with AK-47s hit our place and made off with 22 steers. That afternoon the police were unable to respond as they were busy guarding ballot boxes. Our neighbours rushed to help instead, and my friend Charles saved our cattle by bravely charging his car at the raiders in a hail of bullets. The raiders ran for it.

This is the situation just in our little corner of Kenya. After the failed elections of 27 December, men on bicycles brought news from across the Laikipia plains of a nationwide spasm of bloodletting and mayhem. Police were shooting at mobs rioting in support of the opposition leader Raila Odinga. In retaliation for the alleged rigging that returned President Mwai Kibaki to power, pogroms were launched against traders and farmers of the Kikuyu tribe. When the Kikuyu fled the village up the road, food supplies dried up, hunger set in among the mob and rioting flared again.

To cap it all in these apocalyptic times, a local Samburu witchdoctor claimed it was time for his warriors — supporters of Odinga — to advance on the Pokot (who backed Kibaki). He had found a way to turn Pokot bullets into rain — a promise that evidently precipitated today’s clashes.

During the last fortnight a strange, expectant mood has enveloped our farm. We stuck to mundane daily routines, as if this somehow might make the nightmare of what was unfolding over the horizon recede. I devised an evacuation plan for our workers who were from the ‘wrong’ tribes. We dug up lawn grass so as to plant extra vegetables. I said, ‘If we can keep the sheep from rustlers, we can all eat mutton for yonks.’ But today’s gunfire aside, Kenya has at least for now pulled back from the brink. This is mainly because of the basic decency of ordinary Kenyans — whose priorities are to work hard, educate their children, fear God and enjoy a few Tusker beers. Nobody wishes to believe Kenya is a typical African basket case. But though the swift intervention of the world community is heartening, we should not invest much hope in the diplomacy of Washington, with its disastrous foreign policies, nor the African Union, which has had unmitigated diplomatic failures in Darfur and Somalia. It is only Kenyans themselves who can prevent fresh chaos and to do this they must swiftly identify what and who caused the violence.

Ordinary citizens know that the entire class of Kenyan political leaders is to blame. The African saying that ‘When elephants fight, the grass suffers’ applies tragically in this case. Kenyan politicians are paid more money than any of their counterparts in Europe or the US — though they hardly bother ever to turn up at parliament. By contrast, more than half of Kenya’s 37 million people exist on the equivalent of 50p a day, a consequence mainly of leaders’ misrule and greed. In the present environment, poverty will get worse. Kenya’s fertility rate is increasing and mothers have an average of around five children. Forty per cent of Kenyans are below the age of 14. The country’s leaders have no plan to tackle this by creating jobs to alleviate poverty but remain intent on grand corruption.

Kenyan democracy failed because ordinary people were encouraged to believe that democracy would work as a instrument of change. But Kenya’s leaders — and often international observers — interpret democracy simply in terms of the ceremony of multi party elections. Polls bestow legitimacy on politicians to pillage for five years until the next depressing cycle begins. This time, the elections themselves were a travesty, with rampant rigging on both sides. One candidate in our constituency put ballot boxes from two voting stations into his vehicle and drove them around to his supporters.

In the election campaign rallies I attended there were no debates about policies, despite the huge health, education, security and poverty problems. The Big Men arrived in helicopters hired at £1,000 an hour to address voters in slums and forest clearings. When they spoke English for the Western media’s benefit, they talked of human rights and democracy. But when they switched to vernacular languages, I was shocked at how venomous and filled with ethnic chauvinism their rhetoric became. At one rally I saw a candidate accuse her opponent of being a pig, another of being a blood-sucking tick. Voters responded by chanting curses against a rival tribe. Praise singers kowtowed to the Big Men, who dozed, talked on their mobile phones and then waddled back to their helicopters, which blew dust into the faces of the poor on take-off.

As we saw later, the tribal hate-speak resulted in scenes that were reminiscent of Burundi and Rwanda: FM radio stations broadcasting ethnic chauvinism, machetewielding youths at roadblocks, refugees being burned in churches.

It is a little-known fact that though Raila Odinga was a socialist firebrand who named his son Fidel Castro, his mentor was the former Liberal party leader Lord Steel. Liberal party support for decentralisation and stronger local government might have inspired Raila to revive a 1960s Kenyan campaign for a policy known as ‘Majimboism’. On paper, devolution of power in an African nation led by corrupt politicians seemed to make sense, and Raila supported the flow of resources to the districts to kick-start the building of schools, clinics and clean water projects.

But on a local level ‘Majimboism’ was interpreted another way. Months ago a drunken power-broker in a local village wagged his finger at us and declared that after the elections all ‘outsiders’, including Kikuyu farmers and whites, would be kicked out and their farms taken. The epicentre of the violence has occurred in Rift Valley districts where Kalenjin leaders have in the name of Majimboism been stirring up ethnic fascism against Kikuyu peasants since multiparty polls in 1992, when thousands died.

In Kenya, you cannot have decentralisation without functioning national institutions. Without these you have mob rule, with the poor deciding to help themselves to the property of ‘outsiders’. It was always going to be an explosive cocktail in a Kenya already scarred by tribal clashes, sapped by corruption, greed and incitement to ethnic hatred by leaders. For those who have already acquired a taste for killing with impunity, it is easy for them to do it again. For their part, hardline Kikuyus and their allied tribes in the ‘Mount Kenya Mafia’ appear to show no contrition over their contribution to this political chaos in a blatantly rigged election. Instead, they crow about victory, claim they can exclude Raila from a power-sharing deal and celebrate a return to business as usual. But if this arrogance persists, the political impasse could result in fresh mayhem.

Under Kibaki, the economy was growing by 6 per cent a year. This was not directly thanks to good government, which did nothing to encourage enterprise. Business went well simply because government had begun to withdraw from its traditional role of harassing the private sector — though Kenya’s leaders continued to loot state coffers.

Fresh riots erupted across several cities on Tuesday night after Kibaki snubbed Raila and appointed a new cabinet made up of a narrow coalition of ethnic allies. Such a move may provoke a protracted political crisis along the lines of another failed African state, Ivory Coast. Whatever the case, the recent violence will simply worsen the poverty that was itself the root cause of the current crisis. The Western news hacks will pretty soon trickle home, but for Kenyans the economic blowback will worsen for months. Already we are seeing mass lay-offs and the collapse of the tourism and agricultural industries. The great nation of Kenya needs a miracle.