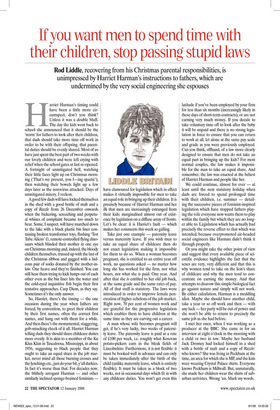 If you want men to spend time with their children, stop passing stupid laws

Rod Liddle, recovering from his Christmas parental responsibilities, is unimpressed by Harriet Harman’s instructions to fathers, which are undermined by the very social engineering she espouses Harriet Harman’s timing could have been a little more circumspect, don’t you think? Unless it was a double bluff. The day the kids went back to school she announced that it should be the ‘norm’ for fathers to look after their children, that dads should take more time off work in order to be with their offspring, that parental duties should be evenly shared. Most of us have just spent the best part of two weeks with our lovely children and were left crying with relief when the school gates at last re-opened. A fortnight of unmitigated hell, watching their little faces light up on Christmas morning (‘That’s my present, you f—ing spastic’), then watching their bowels light up a few days later as the norovirus attacked. Days of unmitigated misery, I reckon.

A good few dads will have locked themselves in the shed with a good bottle of malt and a copy of Razzle from 26 December onwards when the bickering, screeching and perpetual whines of complaint became too much to bear. Some, I suspect, will have marched down to the lake with a black plastic bin liner containing broken transformer toys, flashing ‘Test Tube Aliens’ ©, remote-controlled flying dinosaurs which blinded their mother in one eye on Christmas morning and, indeed, the bloody children themselves, trussed up with the last of the Christmas ribbon and gagged with a hideous pair of socks donated by the mother-inlaw. One heave and they’re finished. You can still hear them trying to kick lumps out of each other even as the bin liner hits the water and the cold-eyed inquisitive fish begin their first tentative approaches. Carp Diem, as they say. Sometimes it’s the only answer.

So, Harriet, there’s the timing — the one occasion during the year when fathers are forced, by convention, to greet their children by their first names, often the correct first names, and hang out with them for a while. And then there’s the monumental, staggering, gob-smacking cheek of it all. Harriet Harman telling dads they should share childcare duties more evenly. It is akin to a member of the Ku Klux Klan in Tuscaloosa, Mississippi, in about 1956, suggesting to black people that they ought to take an equal share in the job market, never mind all those burning crosses and the lynchings etc., just do your bit, y’all darkies. In fact it’s worse than that. For decades now, the blithely arrogant Harman — and other similarly inclined sponge-brained feminists — have clamoured for legislation which in effect makes it virtually impossible for men to take an equal role in bringing up their children. It is precisely because of Harriet Harman and her ilk that men are increasingly estranged from their kids; marginalised almost out of existence by legislation on a diffuse array of fronts. Let’s be clear: it is Harriet’s fault — which makes her comments this week so galling.

Take just one example — paternity leave versus maternity leave. If you wish men to take an equal share of childcare then do not enact legislation making it impossible for them to do so. When a woman becomes pregnant, she is entitled to an entire year off work, no questions asked — no matter how long she has worked for the firm, nor what hours, nor what she is paid. One year. And after that she is entitled to her old job back, at the same grade and the same rates of pay. All of that stuff is statutory. The laws were introduced in order to improve female penetration of higher echelons of the job market. Right now, 70 per cent of women work and are grateful for the progressive legislation which enables them to have children at the same time as they are carving out a career.

A man whose wife becomes pregnant will get, if he’s very lucky, two weeks of paternity leave. The paternity leave is paid at a rate of £100 per week, i.e. roughly what Kosovan potato-pickers earn in the bleak fields of Lincolnshire. Furthermore, it is not flexible: it must be booked well in advance and can only be taken immediately after the birth of the child (unlike maternity leave, which is entirely flexible). It must be taken as a block of two weeks, not in occasional days which fit in with any childcare duties. You won’t get even this latitude if you’ve been employed by your firm for less than six months (increasingly likely in these days of short-term contracts), or are not earning very much money. If you decide to take voluntary time off to look after the baby it will be unpaid and there is no strong legislation in force to ensure that you can return to work at all, let alone at the same pay scale and grade as you were previously employed. Can you think, offhand, of a law more clearly designed to ensure that men do not take an equal part in bringing up the kids? For most normal couples, the law makes it impossible for the man to take an equal share. And remember, the law was enacted at the behest of Harriet Harman and people like her.

We could continue, almost for ever — at least until the next statutory holiday when dads are forced to spend prolonged time with their children, i.e. summer — detailing the successive pieces of feminist-inspired legislation which have stopped fathers playing the role everyone now wants them to play within the family but which they are no longer able to. Legislation which has actually had precisely the reverse effect to that which was intended, because overpromoted air-headed social engineers like Harman didn’t think it through properly.

Or you might take the other point of view and suggest that every available piece of scientific evidence highlights the fact that the sexes are very, very different and that this is why women tend to take on the lion’s share of childcare and why the men tend to concentrate on earning the money. And that attempts to disavow this simple biological fact go against nature and simply will not work. By either calculation, Harman is a meddling idiot. Maybe she should have another child, take a year or so off work and then — with any luck — her party will be out of power and she won’t be able to return to precisely the same job as she had before.

I met her once, when I was working as a producer at the BBC. She came in for an interview at eight o’clock in the morning with a child or two in tow. Maybe her husband Jack Dromey had locked himself in a shed with a bottle of malt and a copy of Razzle: who knows? She was living in Peckham at the time, an area for which she is MP, and the kids were wearing Crystal Palace shirts. Everyone knows Peckham is Millwall. But, unnaturally, she made her children wear the shirts of suburban arrivistes. Wrong ’un. Mark my words.