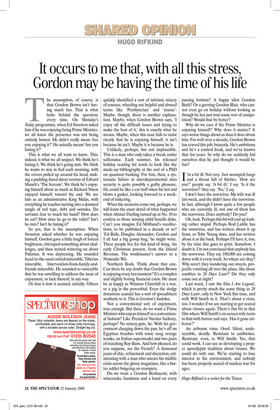 It occurs to me that, with all this stress, Gordon may be having the time of his life

The assumption, of course, is that Gordon Brown isn’t having much fun. That is what lurks behind the question, every time. On Monday’s Today programme, when Ed Stourton asked him if he was enjoying being Prime Minister, we all knew the presenter was not being entirely honest. He didn’t really mean ‘Are you enjoying it?’ He actually meant ‘Are you hating it?’ This is what we all want to know. This, indeed, is what we all suspect. We think he’s hating it. We think he’s going nuts. We think he wants to stay in bed each morning, with the covers pulled up around his head, making a pudding-faced duvet version of Edvard Munch’s ‘The Scream’. We think he’s enjoying himself about as much as Richard Nixon enjoyed himself, toward the end. We see him as an administrative King Midas, with everything he touches turning into a doomed tangle of red tape, debt and oomska. Do servants fear to touch his hand? How does he eat? How does he go to the toilet? Isn’t he nuts? Isn’t he hating it?

So yes, that is the assumption. When Stourton asked whether he was enjoying himself, Gordon gave a little laugh of forced brightness, chirruped something about challenges, and then started wittering on about Pakistan. It was depressing. He sounded head-in-the-sand-ostrich miserable. Tiberius miserable. Intervention-from-family-andfriends miserable. He sounded so miserable that he was unwilling to address the issue of enjoyment, or lack thereof, in any way.

quickly identified a sort of intrinsic misery of essence, wheeling out helpful and abused terms like ‘Presbyterian’ and ‘manse’. Maybe, though, there is another explanation. Maybe, when Gordon Brown says, ‘I enjoy all the difficult issues and trying to make the best of it,’ this is exactly what he means. Maybe, when this man fails to insist clearly that he is enjoying himself, it isn’t because he isn’t. Maybe it is because he is.

Unlikely, perhaps, but not implausible. This is a man who only takes a break under sufferance. Each summer, his released holiday reading list tends to look like the made-up bibliography at the end of a PhD on quantum banking. For him, then, a systematic failure in interdepartmental data security is quite possibly a guilty pleasure. He could be like a car buff when his hot rod blows a gasket, looking forward to a weekend of tinkering.

When the memoirs come out, perhaps, we will learn the exact detail of what happened when Alistair Darling turned up at No. 10 to confess to those missing child benefit disks. Can’t you imagine Ed Miliband’s recollections, to be published in a decade or so? ‘Ed Balls, Douglas Alexander, Gordon and I all had a big group hug,’ he might write. These people live for this kind of thing. An early Christmas present, from the Inland Revenue. The wonkmaster’s answer to a Nintendo Wii.

Northern Rock. Think about that one. Can there be any doubt that Gordon Brown is enjoying every last moment? It’s a complex and slightly boring financial crisis. He must

be as happy as Winston Churchill in a war, or a pig in the proverbial. Even the dodgy donations scandal has a sort of spreadsheet aesthetic to it. This is Gordon’s Sudoku.

Not a conventional sort of enjoyment, true enough. But then, do we want a Prime Minister who enjoys himself in a conventional fashion? Like President Nicolas Sarkozy, perhaps? No misery-guts, he. With his government charging down the pan, he’s off on Egyptian beaches with some snug orange trunks, an Italian supermodel and two pairs of matching Ray-Bans. And how pleased, do you suppose, are the French? A thousand years of chic, refinement and discretion, culminating with a man who smears his midlife crisis across the glossy magazines, like a butter addict bingeing on crumpets.

Do we want a Gordon Berlusconi, with wisecracks, bandanas and a hand on every passing bottom? A happy idiot Gordon Bush? Or a gurning Gordon Blair, who cannot even go on holiday without looking as though he has just won some sort of competition? Would that be better?

Why do we care if the Prime Minister is enjoying himself? Why does it matter? It says worse things about us than it does about him. For well over a decade, Gordon Brown has craved this job, brazenly. He’s ambitious and he’s a control freak, and we’ve known that for years. So why do we suddenly kid ourselves that he just thought it would be fun?

Oh, look. Perhaps this bit will end up looking rather stupid. Perhaps Rod Liddle has the norovirus, and has written about it up front, or Toby Young does, and has written about it at the back. Perhaps I’ll have it, too, by the time this goes to print. Somehow, I doubt it. I’m not convinced that anybody has the norovirus. They say 100,000 are coming down with it every week. So where are they? Why aren’t they wandering our streets, projectile vomiting all over the place, like those zombies in 28 Days Later? Do they only come out at night?

Last week, I saw the film I Am Legend, which is pretty much the same thing as 28 Days Later, only in New York this time, and with Will Smith in it. That’s about a virus, too. I wonder if we are starting to get scared about viruses again. There’s this bit in that film where Will Smith’s on-screen wife turns to him with horror and says, ‘Has it gone airborne?’ An airborne virus. Ooof. Silent, undetectable, deadly. Resistant to antibiotics. Resistant, even, to Will Smith. Yes, that could work. I can see us developing a proper apocalyptic tradition about viruses. We could do with one. We’re starting to lose interest in the environment, and nobody has been properly scared of nuclear war for ages.